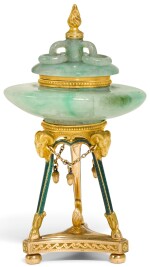 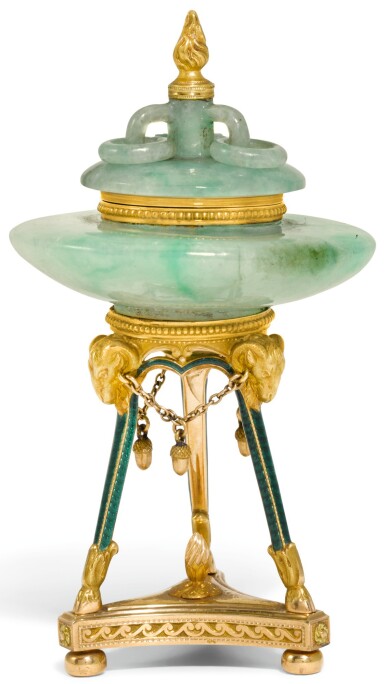 Overall very good condition. Small loss to green enamel on one of the legs, three small scratches to the jade on the lid

The French luxury firm Boucheron is today probably best known for its exquisite jewellery. Founded by Frédéric Boucheron (1830-1902) in 1858 and initially located in the Palais-Royal, Boucheron was the first jewellery firm to move in 1893 to place Vendôme, where the company remains to this day. In the same year, Boucheron supplied the participants of the wedding ceremony for King Ferdinand I of Bulgaria to Marie-Louise of Bourbon-Parma, designing tiaras, brooches, rings and pendants. The family business soon attracted a rather eccentric and famous clientele as well as the most glamorous members of worldwide royalty and aristocracy, such as a Riza Shah Pahlevi and Queen Rania of Jordan. In 1928, Boucheron was commissioned to mount the stones of the treasure of the Maharaja of Patiala. The firm’s interest and expertise in lapidary can also be observed in a number of gold-mounted hardstone objects, such as this jade perfume burner, which relates to the early twentieth century fascination for ‘exotic’ materials such as jade, corals, onyx and burgau mother of pearl, all of which were to become hugely fashionable with jewelers such as Boucheron, Cartier or van Cleef & Arpels. Interestingly, this incense burner bears the mark of F. Bisson, who worked for Boucheron as a mounter of various types of jewellery and objects such as colourful Art Deco brooches or pectoral ornaments set with jade, turquoises, lapis lazuli or coral. A few of these were made for the Exposition des Arts Décoratifs in 1925 (see Gilles Néret, Boucheron. Four Generations of a World-Renowned Jeweler, New York, 1988, no. 148, 150). In the same way as for eighteenth century gold box making in Paris, a division of work seems to have taken place, even if to a smaller extent – hinge makers, lapidaries, engravers, goldsmiths all participated in the process of creating an object. While we know the names of the designer for the brooches mounted by Bisson – Lucien Hirtz – it is interesting to note that one other example of an object made by Bisson (rather than only mounted) is located in the Boucheron collection (Néret, nr. 125). This gold-mounted mother of pearl cigarette case, circa 1906, with beautifully chased cagework and proportions based on late eighteenth century gold snuff boxes made in Paris, is a somewhat modern take on the former fashion of tobacco consumption. Stylistically nowhere near Art Deco jewellery, this object demonstrates Bisson’s craftmanship in mounting the fragile panels of mother of pearl, much as the neoclassical goldwork does for the perfume burner in the present lot, leaving the beautifully-patterned jade to be the protagonist of the piece.