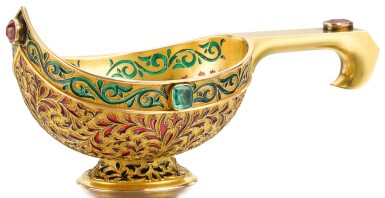 of traditional form, the body with foliate scrolls in green and red, with bezel-set rubies, emeralds, spinel and dark pink sapphire, struck on the base with workmaster's initials, 56 standard, with import marks

Very good condition overall. A few scaretted surface chips to the green enamel along the top border. A small chip to one of the emeralds, approx, 4 by 2mm.

Peter Carl Fabergé: Goldsmith and Jeweller to the Russian Imperial Court and to the principal Crowned Heads of Europe,” A La Vieille Russie, New York, November-December 1949, no. 210 (incorrectly attributed to Tillander).

An Exhibition of His Works: Peter Carl Fabergé, Goldsmith and Jeweller to the Russian Imperial Court and to the principal Crowned Heads of Europe (New York: A La Vieille Russie, 1949), cat. no. 210, p. 23.

The court jeweller Hahn was established by Karl Hahn in 1873 and became the supplier of choice for gold boxes, presentation cases, and other jewelled items during the reign of Alexander III (1881-1894).

The future Emperor Nicholas II particularly favoured the firm’s work and records of his expenditures indicate that he purchased far more from Hahn than other competitors, including Fabergé. Hahn created some of the Imperial court’s most important commissions, including the coronation crown of Empress Alexandra Feodorovna (1872-1918), which cost 76,200 roubles - an extremely high price. Other commissions included some of the finest examples of the diamond insignia of the Imperial orders, presentation jewellery, cases, and snuffboxes. On Hahn’s work for the Imperial court, see Ulla Tillander-Godenhielm, The Russian Imperial Award System 1894-1917 (Helsinki, 2005), pp. 179-184, 384-385, and 504.

Alexander Adolfovich Treiden (1858-?) together with Carl Blank, served as Hahn’s primary workmasters and were responsible for producing most of the firm’s important Imperial presentation cases. Alexander Treiden was a merchant of the second guild from 1892-1917 and his St Petersburg workshop, which produced gold and silver items, was located at Nevsky prospect, 42. Treiden is particularly associated with the supply of presentation cigarette cases to Hahn, making the present kovsh a particularly rare and sophisticated example of his output.

Examples of plique-à-jour enamel, with the transparency of stain glass, created by delicate enamel cells set in a gold are amongst the rarest of Russian objects. For another gold and plique-à-jour enamel kovsh with maker’s marks AT but attributed to Tillander, see Fabergé: Imperial Craftsman and His World, London, 2000, p. 342, later sold at Sotheby’s London, 12 June 2007, lot 415