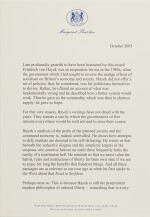 signed typescript speech by Margaret Thatcher on F.A. Hayek on the receipt of the Internationaler Preis der Friedrich-August-von-Hayek-Stiftung. 2pp., dated October 2003, on headed stationery, signed in blue ink, with a copy of the diploma housed in a blue cloth portfolio;

4 signed photographs of Thatcher with Lawrence and Esca Hayek;

one menu from the “Fisher/Thatcher-Lunch” at the Café Royal, dated 22 June 1992, inscribed by Thatcher;

additional menu from the “Fisher/Thatcher-Lunch” at the Café Royal, dated 22 June 1992, signed by attendees including Thatcher, Hayek and Keith Joseph;

12 pages of copies of correspondence between Thatcher and Hayek;

There is a famous anecdote that during a Conservative Party policy meeting, Thatcher removed her copy of Hayek’s Constitution of Liberty from her handbag, slammed it down on the table and declared, “This is what we believe.”

Whether the story stands up to its own legend, the impact that Hayek’s writing had on Thatcher, her advisors, and her policies is undeniable. Thatcher herself wrote: “the most powerful critique of socialist planning and the socialist state which I read at this time and to which I have returned so often since [is] F.A. Hayek's The Road to Serfdom."

Throughout her political career Thatcher was a fierce advocate of free-market libertarianism. In their first meeting at the Institute of Economic Affairs Ralph Harris explained "although she is known as being a rather overpowering lady she sat down like a meek schoolgirl and listened."

This 2003 speech concludes: “Hayek is, therefore, the prophet not of doom and disaster, but of peace and plenty. His is a voice of wisdom for our time, and for all time. We should listen to him.”

Minor creasing to copies of correspondence.