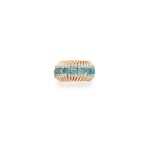 Designed as a band of channel-set zircon baguettes, flanked by bezel-set single-cut diamonds, extending to a border of fluted gold, size 7½, signed Verdura; circa 1947.

As a young girl, Natalie escaped Russia with her mother and sister Irina and lived in exile in Paris during the 1920s. She became a noted model for Vogue Magazine, first in Paris and later in New York. Edward Steichen, Horst and Cecil Beaton took many of her fashion photographs. While in London she met the Broadway producer and director John C. “Jack” Wilson, business partner of Noel Coward, Alfred Lunt and Lynn Fontanne. Jack Wilson and Natalie were married in 1937 at his home in Fairfield, Connecticut.

Her close friendship with jewelry designer Fulco di Verdura would result in her collection of several pieces of jewels created by the two, one of which is on offer here. Several pieces from the collection will also be sold in the December 10, Magnificent Jewels sale.

Upon her death in 1981, the jewels on offer were passed to John C. Wilson’s niece, a portion of which was sold by Sotheby's in 2009. Sotheby's is once again honored to present a selection of jewels from this important family collection.

In overall fair to good condition, the mounting with signs of wear including surface scratches and nicks, with evidence of adhesive, and the recessed areas with minor discoloration, not immediately noticeable when worn. Mounting tests as platinum and 14 karat (pink) gold. The zircons are light to medium light slightly greenish blue, most with heavily abraded crowns, and three bearing significant chips. Gross weight approximately 15 dwts. Width approximately ½ inch. Bears a nice heft.