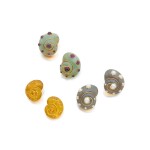 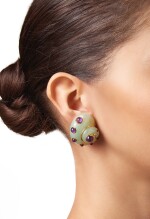 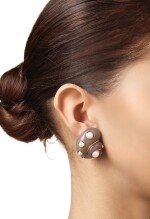 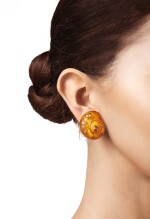 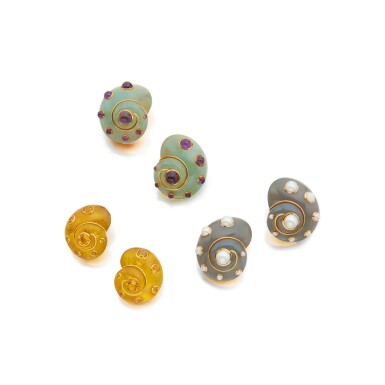 Each designed as a pair of seashells, one composed of carved gray chalcedony studded with cultured half-pearls, another pair featuring carved aventurine quartz accented with cabochon amethysts, and a third pair of carved amber, accented by round citrines, each signed Verdura, with Trianon workshop marks. With two signed boxes.

Sotheby’s is honored to present a highly personal selection of jewels from the important collections of Charlotte Ford and Anne Ford.

Born in Detroit, Charlotte and Anne were the only daughters of Henry Ford II and Anne McDonnell Ford. Their father, Henry Ford II, was the eldest grandson of Henry Ford, the venerable founder of Ford Motor Company, and the eldest son of Edsel and Eleanor Ford, renowned collectors and major art benefactors in Detroit. The sisters grew up on the picturesque shores of Lake St. Clair in Grosse Pointe, Michigan, while their father served as the President and Chief Executive Officer of the Ford Motor Company from 1945 through 1970, transitioning to Chairman until he retired in 1981.

From their mother Anne, daughters Charlotte and Anne were exposed to culture, style and high society. Born Anne McDonnell, their mother was part of the prominent New York family of James F. McDonnell. Her upbringing in Rye, New York was complemented by lavish residences in Manhattan and Southampton, the latter being the location of Anne McDonnell and Henry Ford II’s wedding in 1940. Anne was deeply engaged in the arts, serving on the White House Fine Arts Committee for the Eisenhower and Kennedy administrations. In Michigan, she was actively involved with the Detroit Institute of Arts and the Detroit Opera. Mrs. McDonnell Ford would eventually be elected to the board of the Metropolitan Museum of Art – one of the first women to serve in such a capacity. Always stylish, Anne McDonnell Ford was named one of the ten best-dressed women in the world in 1956 by the International Best Dressed List, and was inducted into the Fashion Hall of Fame in 1960.

After a societal debut fête in Grosse Pointe labeled by a Hearst columnist as the ‘party of the century’, Charlotte moved to New York City at the age of 18. Anne would also move to New York at that time and each sister enjoyed socialite status in their new home. Both women, like their mother, were known for their exquisite taste in fashion and named to notable best dressed lists.

Both sisters are accomplished authors: Charlotte penning Etiquette: Charlotte Ford’s Guide to Modern Manners and its successor, 21st Century Etiquette: Charlotte Ford’s Guide to Manners for the Modern Age, and Anne publishing her acclaimed memoir, Laughing Allegra and On Their Own: Creating an Independent Future for Your Adult Child with Learning Disabilities and ADHD. In addition to her significant writings on the subject, Anne served as Chairman of the National Center for Learning Disabilities from 1989 through 2001. Charlotte has proudly served on the Board of Trustees of New York Presbyterian Hospital and currently holds the position of Co-Vice Chair – the highest-ranking woman on the board.

Throughout their lives, Charlotte and Anne have surrounded themselves with superb examples of both decorative and fine art, exhibiting consummate tastes for their time. They have applied a similar level of discernment to their jewelry collections. In part inherited and in part deliberate, they comprise important gemstones—most notably colored diamonds and natural pearls—and superlative design. Anchored by classic examples by Van Cleef & Arpels, David Webb, Schlumberger for Tiffany & Co., and Bulgari, the collections are unified by a refined elegance that reflects the sophistication of these two notable members of a highly lauded American family.

The remarkable collections of Charlotte and Anne Ford will be offered across our December 9 and 10 sales of Fine and Magnificent Jewels.

Each pair in good condition, the mountings with signs of light wear including light scratches, and the reverse with some minor discoloration, not visible when worn. The gray chalcedony and cultured half-pearl earclips with scratch number VEC1451; the aventurine quartz and amethyst earclips with scratch number VEC1364; the amber and citrine earclips with scratch number VEC1534. Each stamped 750 for 18 karat gold. The chalcedony is medium gray, even in color and in good condition. The cultured half-pearls are of white to creamy white body color, with minor blemishing including pitting, with faint to moderate rose overtones; two cultured half-pearls heavily damaged with exposed nucleus beads and cracks, not immediately noticeable when worn. The aventurine quartz is medium light green, slightly mottled, with faint to moderate aventurescence. The amethyst is medium to medium deep purple, slightly included. The amber is medium orangey yellow, slightly included, one with a fracture, and each with heavily crackled surface, not immediately noticeable when worn. The citrines are medium orangey yellow, eye clean to slightly included. Total gross weight approximately 60 dwts. The gray chalcedony earclips and the aventurine quartz earclips measuring approximately 1¼ inches in length; the amber earclips measuring approximately 1 inch in length.