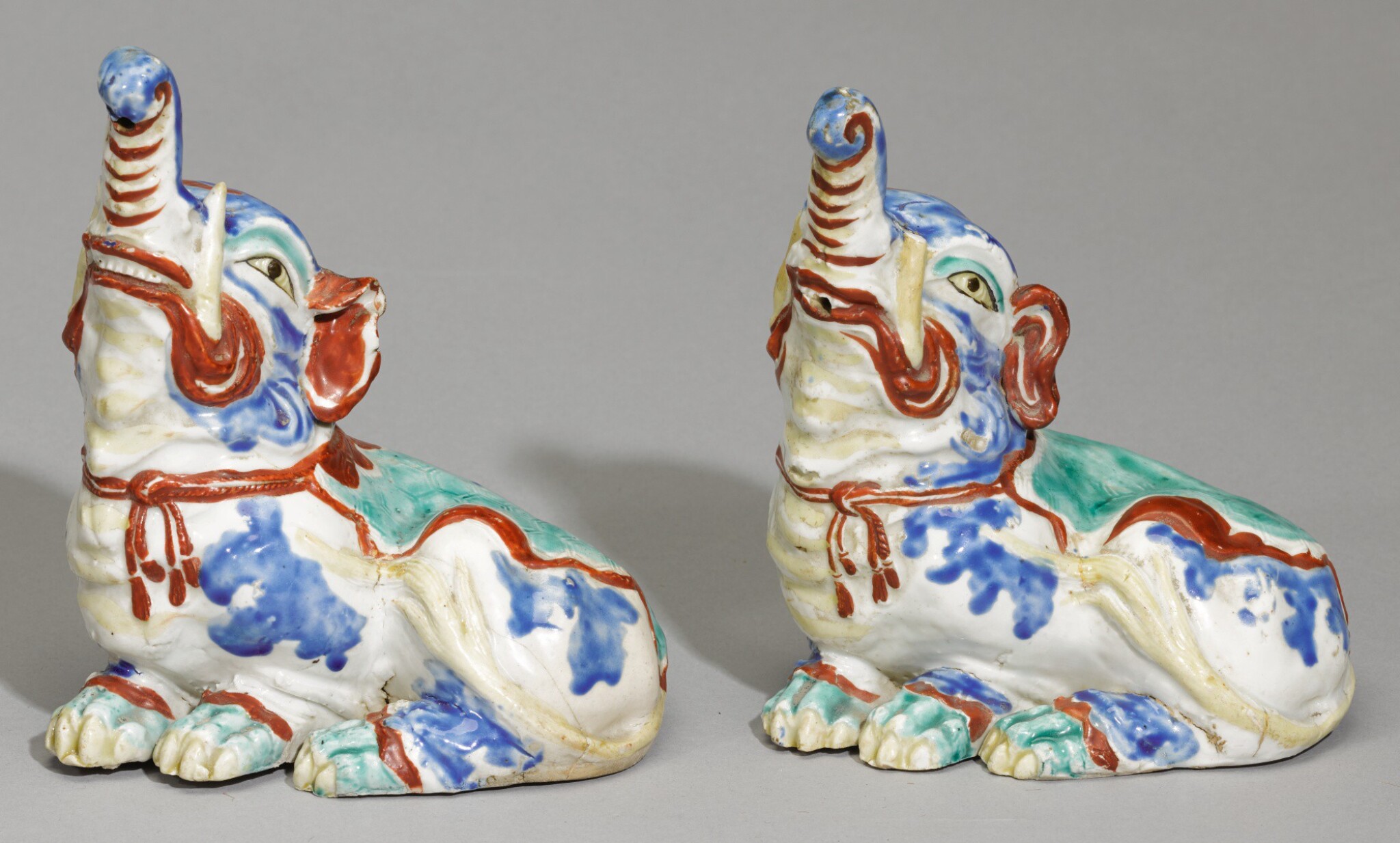 each elephant modelled lying down with upturned trunk and decorated in green, blue, black and red enamels

-  Both the elephants have slight firing cracks slightly extended on the bases.

-  As can be seen in the illustration, one elephant has some old damage to its two tusks.

-  Each of the ears have slight old chips.

-  Otherwise, they are in good condition overall for such early models.

-  The colours are vibrant and enamels are not worn.

Thence by direct descent to the present owner.

These auspicious and exotic porcelain elephants were for centuries part of the Sousa / Dukes of Palmela collection. This family, apart from the royal family, was the most relevant collecting dynasty in Portugal with several important collectors and art patrons throughout its long history (see Uma família de coleccionadores: poder e cultura - antiga colecção Palmela (exh. cat.), Casa-Museu Anastácio Gonçalves, Lisbon, 2001).

The first major figure of this dynasty is Dom Luís de Sousa (1637-1690), Bishop of Lamego and made Archbishop of Braga during his stay as Portuguese ambassador in Rome. An avid collector and patron, he acquired in the Eternal city many works of art which later went to enrich the Sousa’s family main seat, the Palácio do Calhariz in Azeitão. Through the correspondence and travelling of Jesuit missions, Japanese works of art were present and admired in Rome in the late 17th century and it is not impossible that the present lot joined the Sousa collection through Dom Luís. Nevertheless, Lisbon was also a major trading hub for objects coming from the Orient and these elephants might have been acquired there by Dom Luís or another member of the family in the late 17th century.

Amongst the great connoisseurs of the family, one should also note Dom Alexandre de Sousa Holstein (1751-1803), who was Portuguese ambassador in Copenhagen, Berlin and Rome in the late 18th century, having promoted excavations in Ariccia, near Rome. A funerary monument to him by Antonio Canova can still be seen today at the Church of St Anthony in Rome. His eldest son, Pedro de Sousa Holstein, 1st Duke of Palmela, was not only a leading political figure of the 19th century in Portugal, serving as prime-minister on several occasions, but also a voracious collector who enriched and secured the long-lasting prestige of the Palmela Collection.

It is thought that the first real, rather than imaginary, elephant was seen in Japan in 1408, when there is a very brief mention of a 'black elephant' brought over from the Nanban [southern barbarian] countries to the court of the emperor Go-Komatsu, Nanban at that date referring to the countries of South-East Asia. This story is lent credence both by Japan's rapidly increasing foreign trade in the early fifteenth century and by the mention of the colour black, which would have differentiated the real elephant from the white elephant of Buddhist iconography, associated with the bodhisattva Fugen. As far as is definitely known, the next elephant was introduced in 1597, but there are two more that may have been sent as gifts in the late sixteenth century, one by the king of Cambodia and another by the Chinese in 1574. The late-sixteenth century gifts of elephants would almost certainly have arrived in western Kyushu, making it possible that the creatures had lived on in regional folk memory until the time this elephant was made at Arita about a century later. See Timon Screech, The Western Scientific Gaze and Popular Imagery in Late Edo Japan (Cambridge, 1996), p. 39 and Sunamoto Etsujiro, Zo [The elephant] (Tokyo, 1932), 1297ff.

The first known documented models of Kakiemon elephants to arrive in Europe are in the collections at Burghley House, Lincolnshire. The inventory states that there were "two large elephants" standing with raised trunks on the bed chamber chimney piece of John Cecil, 5th Earl of Exeter, listed by the Earl's secretary Culpepper Tanner in the 1688 inventory.1 These may have come to the house at the time of the Earl's marriage to Anne Cavendish, daughter of the third Earl of Devonshire.