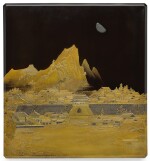 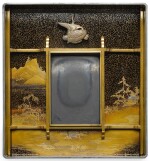 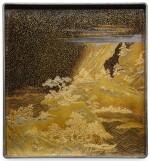 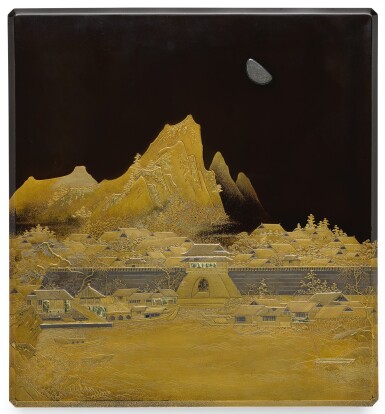 the rectangular writing box with overhanging cover, finely decorated in gold, silver and black hiramaki-e, takamaki-e and hirame on a black ground and inlaid in gold foil with a scene of a fishing village beneath a silvery moon, the interior of the cover a lakeside landscape, the waterdropper in copper gilt depicting geese, rectangular slate inkstone with fundame edge, silver rims

- Overall this suzuribako is in good condition.

- However, there are some slight marks to the top left-hand corner, which only show in certain light.

- The photograph does not show clearly the gold foil, which is in a number of windows of the houses. A few pieces of the gold foil are slightly worn.

- The interior is in fine condition.

The first Igarashi Doho moved, together with his adopted son Doho II, and pupil, Shimizu Kyubei, from Kyoto, his native city, to Kanazawa in Kaga at the behest of Maeda Toshitsune, daimyo of the province in around 1700. Doho was the son of Igarashi Hosai and a descendant of Shinsai (c.1407-90), the founder of the school. Igarashi Doho developed a unique combination of black lacquer coating with extensive use of gold and silver leaf, flecks, and even nuggets of gold and silver. The elegance of this type of lacquerware appealed to the aristocratic nature of the samurai culture. After the fame of Igarashi lacquer was established in Kanazawa (it became known as Kaga-maki-e), Doho returned to Kyoto, where he died in 1678. Neither of the first two Doho masters signed their work. For two suzuribako by Doho I see Tokyo National Museum, Special Exhibition Oriental Lacquer Arts (Tokyo, 1977), no. 301 and 302.

For a similar example of the first Igarashi Doho School, see the exhibition catalogue of the Tokyo National Museum, Igarashi-ha no makie [Maki-e Lacquer of the Igarashi School], (Tokyo, 2004), p. 11, pl. 3.