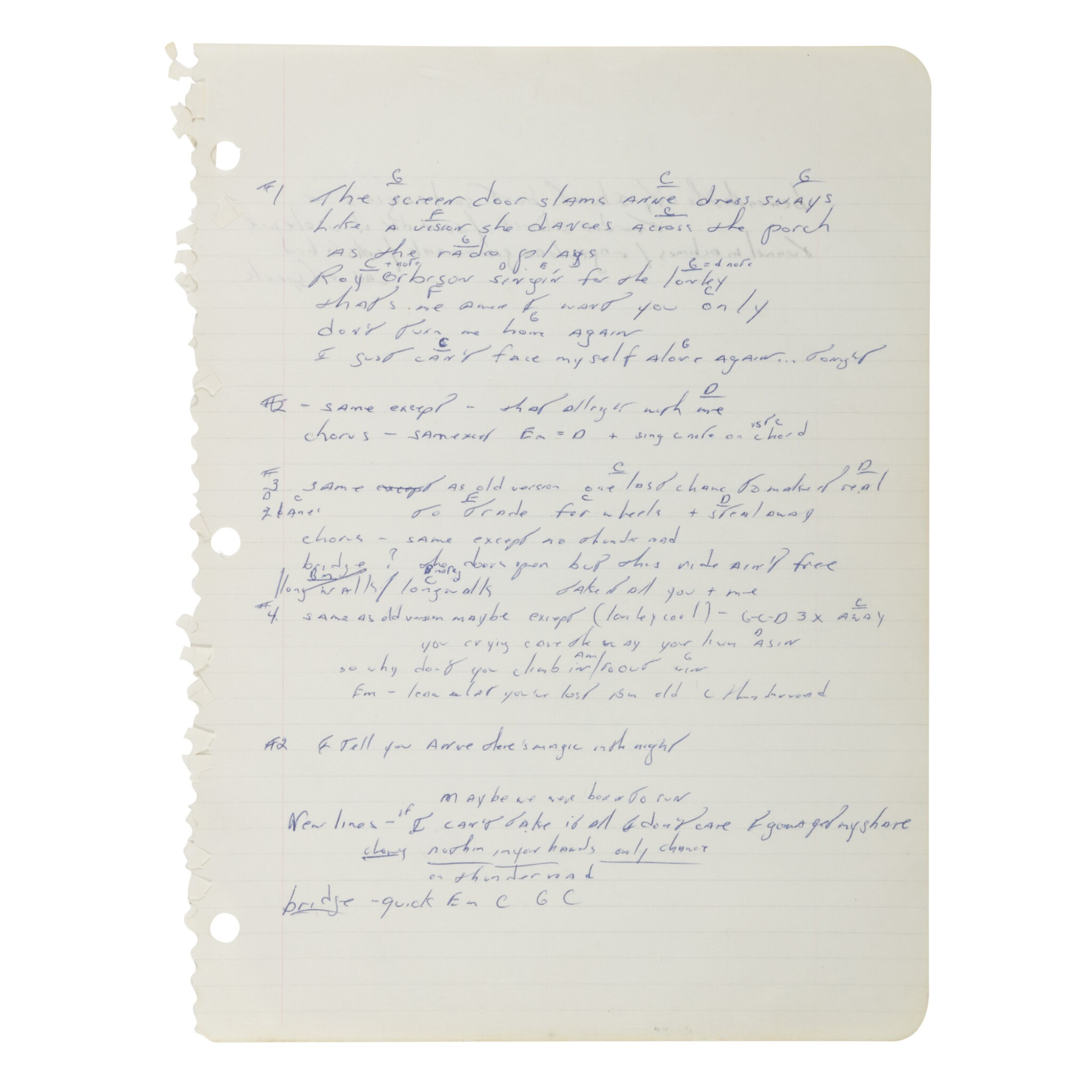 Autograph manuscript lyrics, 1 1/4 pages (11 x 8 in.; 208 x 203 mm), on a single sheet of ruled paper removed from a spiral notebook, comprising 24 lines written in blue ink and 4 lines in black ink, being a partial draft of “Thunder Road,” and a lyric fragment of "Jungleland," with superscript notations and chords; light toning to edges.

The iconic opening track off Springsteen's third album, with additional lines related to "Jungleland" and "Born to Run"

In late 1974, as Bruce Springsteen began work on his third studio album, the stakes had never been higher for the young musician. On the heels of the disappointing commercial performance of his first two albums, Greetings from Ashbury Park (1973) and The Wild, the Innocent & the E Street Shuffle (1973), many in the music industry had written him off as a local phenomenon—a performer who had built a small following on the east coast, but who would never break through to the mainstream. In spite of the onerous pressures building around him, it was in this context that Springsteen would craft his breakthrough album, Born to Run.

The opening track, “Thunder Road,” would occupy a crucial introductory role, and establish many of the albums central themes: "I'd loosely imagined the Born to Run album as a series of vignettes taking place during one long summer day and night. It opens with the early-morning harmonica of "Thunder Road." You are introduced to the album’s central characters and its main proposition: do you want to take a chance?" A sense of romantic hyperrealism and escapism diffuses the entire record, which draws heavily on filmic imagery and allusions: toward that end, the inspiration for the song's title came from the 1958 crime drama starring Robert Mitchum, which caught Springsteen’s eye when he saw a poster in a local movie theater.

Springsteen is known to have an exceedingly intense creative process, writing and rewriting and then recording and rerecording every song on Born to Run. "Thunder Road" evolved considerably from its first known performance in early 1975 under the title "Wings for Wheels" to the recorded studio version. The song's opening line — "The screen door slams, Mary's dress waves" — introduces Mary, the object of the unnamed protagonist's desires. Early drafts of the song mention alternative names: Angelina, Chrissie, Christina, or, as in the present manuscript, Anne.

This manuscript reveals a song in flux, both lyrically and musically. The superscript chord notations differ from the piano driven album version, perhaps reflecting an earlier acoustic arrangement. Lyrically, Springsteen refers to an older version throughout, reflecting that it is very much a work in progress. The first verse aligns closely with the recorded version, including "The screen door slams Anne [sic] dress sways | Like a vision she dances across the porch | As the radio plays | Roy Orbison singin' for the lonely." Elsewhere familiar lyrics are present in a fragmentary form: "When your blowin with nothing in your hands | Baby its your only chance" is here "nothing in your hands only chance | on thunder road". The manuscript also includes references to other songs on the album, including the famous lyric: "maybe we were born to run", and a 4 line working fragment of "Jungleland" that differs substantially from the recorded song: "beneath the city, 2 hearts beat | soul engines in tender silence | surrender of violence | tunnel machines | rages have grown ... | calls to bed | can not speak."

Throughout Springsteen's long and distinguished career, "Thunder Road" has remained one of the artist's most enduring anthems. In 2014, “Thunder Road” was named number three on Rolling Stone’s “100 Greatest Bruce Springsteen Songs of All Time.”