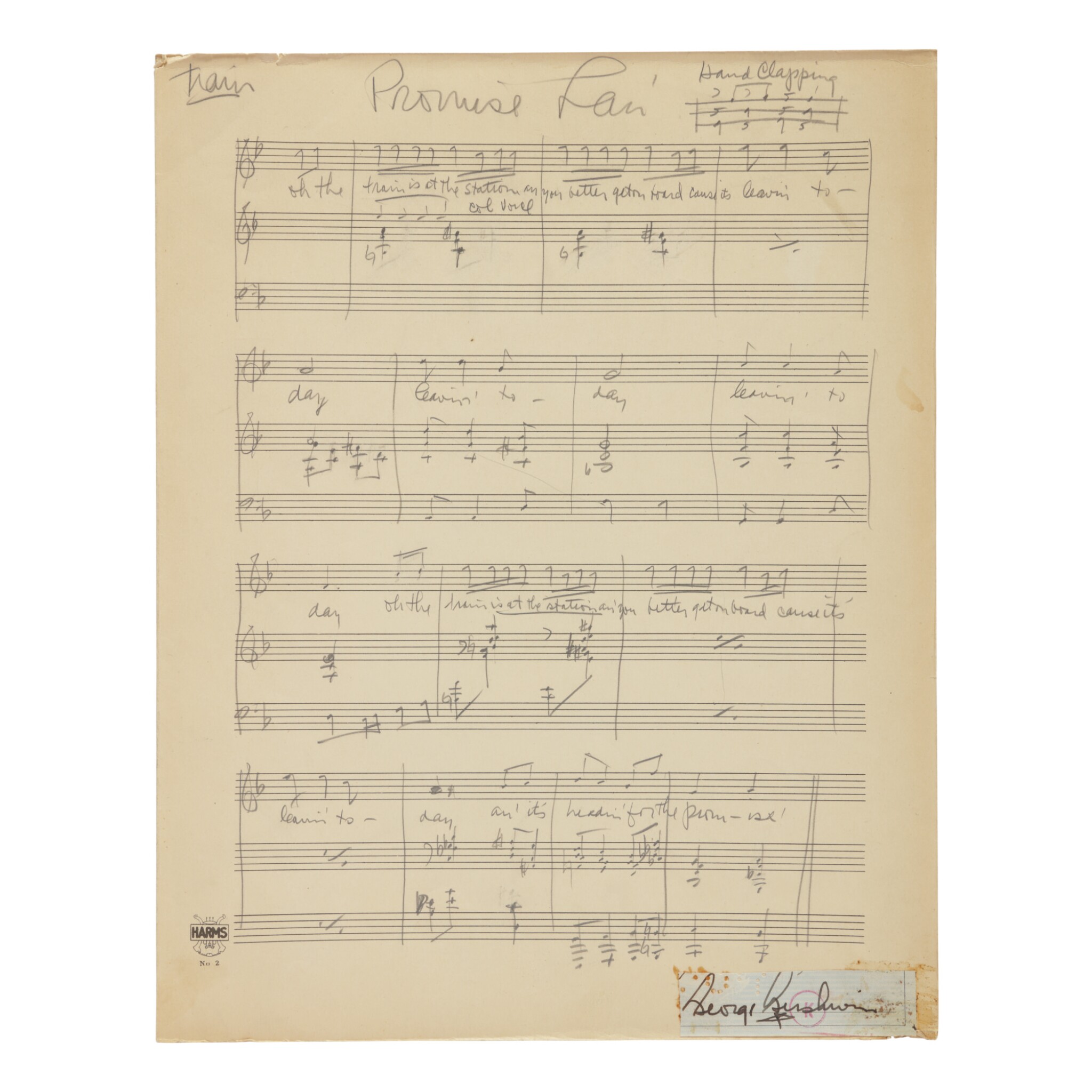 Autograph music manuscript of "Leavin’ for de Promise’ Lan’" from the opera Porgy and Bess, Act One Scene Two

The composition draft of the opening soprano solo [for Bess] with accompaniment, beginning "Oh the train is at the station", titled by Gershwin "Train" and "Promise Lan'" above the music, including a hitherto-unknown instruction for "Hand Clapping" (the rhythms written in the top margin on a hand-drawn 3-line stave); the music for Bess (with treble clef) and piano on up to four systems per page, each of three staves, comprising Bess's main solo, breaking off before the final ensemble to Act One, the rhythms notated in halved (occasionally quarter) note-values with respect to the published version of this scene, and other divergences, comprising some fifty-five bars of music in all, with a few alterations and a cue marked by Gershwin with an arrow, the brown wrapper bearing a presentation inscription by composer's brother Ira: "For Salka Viertel, Mms [Music manuscript] George Gershwin. Pencil sketch of 'Heading Fo' De Promise' Lan'' (Train Song) from the 1st Act Finale of 'Porgy and Bess' / Attached is an autograph which can be pasted on to mms. This autograph (signature rather) cut from a cancelled bank check. / I.G."

4 pages, folio (13 1/8 x 10 1/8 in.; 335 x 255 mm), a bifolium of 12-stave paper by Harms (No.2), page 2 containing 2 bars and a cue to page 3, Gershwin's signature clipped from a bank check pasted onto the first page (as directed by Ira Gershwin's presentation inscription); a few scattered stains and marginal chips and tears, not affecting the text, small glue-stain where the clipped signature has been affixed to the first page.

"Porgy and Bess" is the greatest American opera and Gershwin's masterpiece, to which he devoted two years of his life. This sketch contains music for one of the main protagonists, the beautiful but dissolute Bess (soprano). It is one of the most substantial known sketchleaves for Porgy and Bess: nearly all those that survive are only one or two pages long.

Bess's solo on this sketchleaf introduces the final part of Act One, Scene Two, following Serena's lament for her recently murdered husband Robbins. Bess was formerly the mistress of Crown, Robbins's murderer, but is now romantically entwined with Porgy. She jumps up and urges the denizens of Catfish Row to rise up and travel to the Promised Land: "Oh the train is at the station an' you better get on board."

Pages 1 and 2 contain the music at Rehearsal nos 209-212 (pp.166ff) of the published vocal score (1935), including the refrain on page 3 ("Keep that drivin' wheel arollin', rollin', rollin', rollin, rollin'..."), as far as two bars after Rehearsal no. 213. The call for "Hand-clapping" at the beginning is especially notable: no such marking is found in Gershwin's complete piano-vocal manuscript of this scene, nor in the published score. The music is relatively close to Gershwin's final score, although notated in halved note values (ie beginning with "sixteenth-notes" in 2/4 time). However, the final seven bars on page 3 diverge more radically from the known version. Page 4 contains an apparently earlier and more rudimentary sketch for the refrain on page 3, containing only the voice part, as far as five bars after Rehearsal no. 214: "...Let it roll until we meet our brudder in the Promise' Lan'" (page 169 of the 1935 score). It would appear that Gershwin got as far as the start of page 2 and then interrupted his composition draft, when he realized that he first needed to make a preliminary sketch of the refrain (see page 4), before continuing the draft on page 3.

Porgy and Bess is a substantial (and sometimes controversial) opera, replete with arias, duets and ensembles, and furnished with the sophisticated orchestral textures that set Gershwin apart from contemporary American songwriters. Gershwin's musical language is infused with the melodies and harmonies of blues and jazz, which had attracted him throughout his life, and which he here brings to a grand-scale operatic climax. Gershwin always intended the work to be sung by an all-black cast, which eventually led to it being premiered on Broadway rather than at the Metropolitan Opera House. The few minor white characters are accorded nothing to sing at all. The controversies surrounding the racial aspects, the portrayal of the Gullah community of South Carolina by a white Jewish New Yorker, some of the language in the original libretto, unauthorized performances in "black-face" and other such considerations have continued to affect the fortunes of Porgy and Bess over eight decades.  Although best known for songs such as "Summertime" and "Bess You Is My Woman Now," the work as a whole is generally regarded as a major contribution to opera rather than as a Broadway musical. In this light, the present number constitutes the heroine's introduction to a classic First Act Finale, which, as with so many Romantic operas, culminates in a general ensemble.

The "George and Ira Gershwin Collection" in the Library of Congress contains another four-page sketch for this number (in Box-Folder 132/5), which includes an earlier compositional stage of the music found here. The Library of Congress sketch is written out in the note values found in the final version and printed score (rather than halved values as here), but the music itself is still in a more primitive state than is achieved in the present manuscript. However, the two sources could well be close in date, since both form part of the same creative process.

Sotheby's is pleased to acknowledge the help and advice of Wayne Shirley, the editor of the forthcoming critical edition of Porgy and Bess, in preparing the catalogue description for this lot.

Presented by Ira Gershwin to Salka Viertel (1889–1978), the actress and screenwriter for Greta Garbo; Salka's famous soirées in Hollywood were attended by Gershwin, Schoenberg, Brecht, Thomas Mann, Chaplin, Eisenstein and others, as described in her book The Kindness of Strangers (1969) — Acquired from Viertel, evidently at an early date, by Joseph H. Hirshhorn (1899–1981), the financier, art collector, and benefactor of the Hirshhorn Museum and Sculpture Garden, Smithsonian Institution, Washington, D.C., and subsequently descended in the family to the present owner