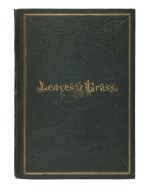 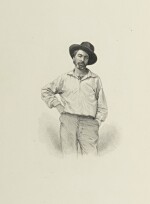 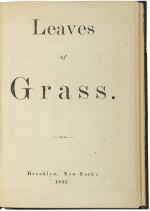 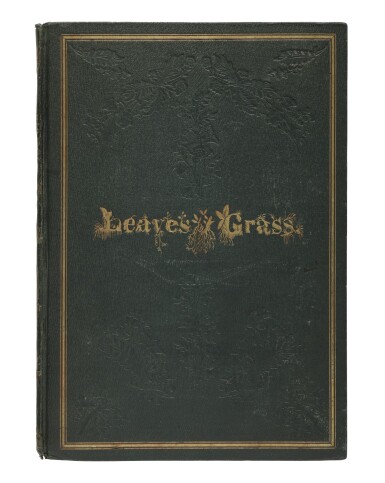 WHITMAN, WALT | Leaves of Grass. Brooklyn: [For the author by Andrew and James Rome,] 1855

WHITMAN, WALT | Leaves of Grass. Brooklyn: [For the author by Andrew and James Rome,] 1855

Leaves of Grass. Brooklyn: [For the author by Andrew and James Rome,] 1855

A fine copy of the first edition of Leaves of Grass; first issue, before the insertion of eight pages of press notices (largely the work of Whitman's own pen) and before the deletion of much of the gilt from the covers and page edges, evidently in an effort to lower production costs; second state of the copyright page (as in all but two recorded copies) and of p. iv, col. 2, l. 4 (adn corrected to and). Of the 795 copies comprising the first edition and printed on the small handpress of the Romes in Brooklyn, only 337 were bound in this, the most ornate of the original cloth bindings.

"The publication of Walt Whitman's Leaves of Grass in July 1855 was a landmark event in literary history. Ralph Waldo Emerson judged the book 'The most extraordinary piece of wit and wisdom America has yet contributed,' saying that it had 'the best merits, namely, of fortifying and encouraging.' … One need not discount his later poetry in order to recognize the specialness of the first edition. This was the original Whitman; this was Whitman at his freshest and, arguably, his most experimental. Nothing like the volume had ever appeared before. Everything about it—the unusual [binding] and title page, the exuberant preface, the twelve free-flowing, untitled poems embracing every ream of experience—was new" (Reynolds).