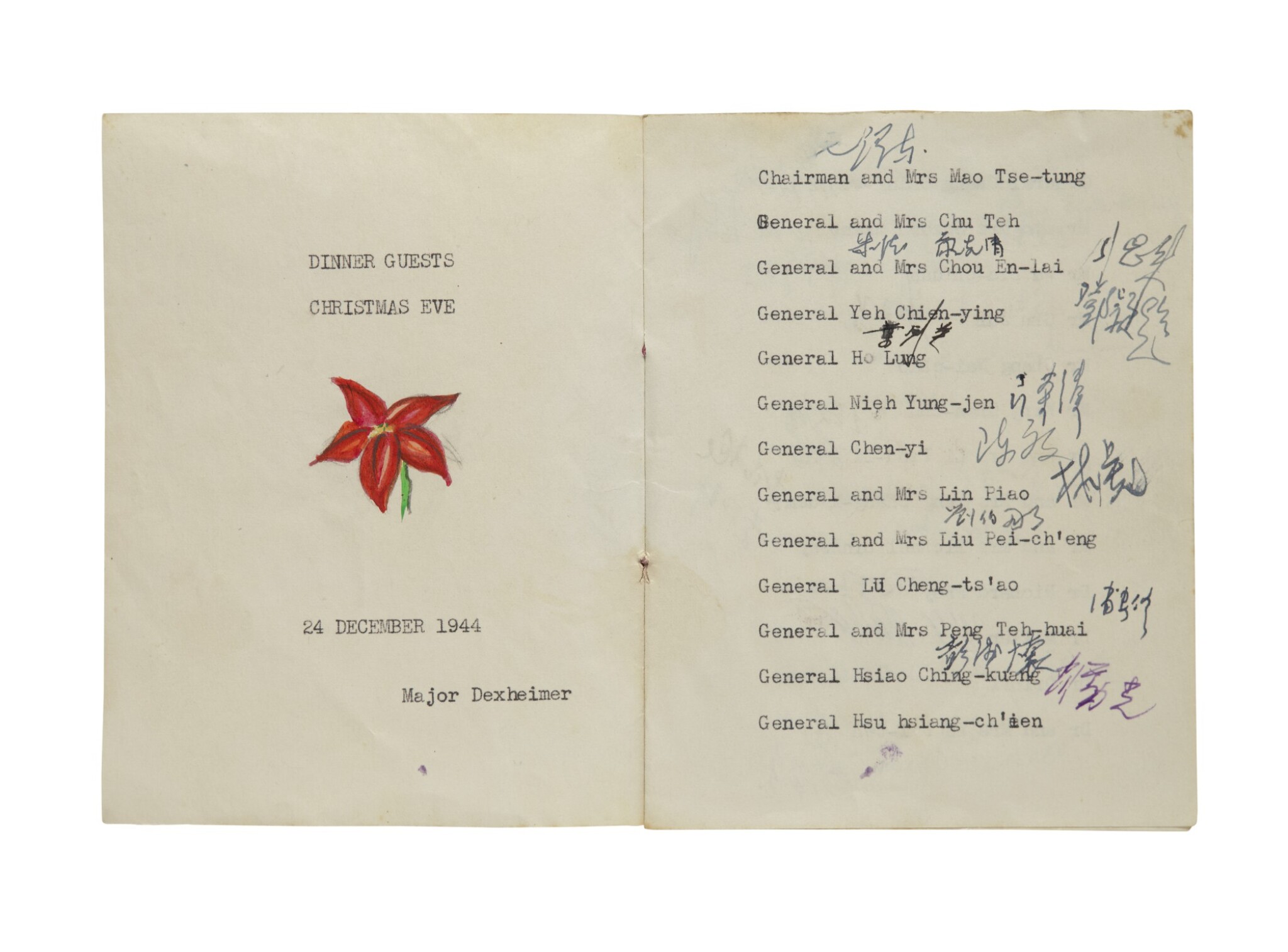 Handmade pamphlet belonging to Major Wilbur A. Dexheimer, signed by his Christmas Eve dinner guests at the American Base in Yan'an, China

Handmade Christmas Eve dinner guest book containing the signatures of almost every major member of the Chinese Communist Party, including Mao Zedong, Zhu De, Zhou Enlai, and others, as well as signatures of the United States army observation in Venan group. We can find record of only two other such pamphlets, one at The International Museum of World War II in Natick, MA, and the other in private hands; none, apparently, have ever before appeared at auction.

An intimate view of a historic moment in American-Chinese relations, when Mao's Red Army was still a guerrilla fighting force in Northern China vying for U.S. backing. This was the first Christmas the Americans spent in Chinese territory, and it was celebrated enthusiastically on both sides. This gathering was likely hosted by Major Dexheimer, with Chinese Generals, as well as several of their wives and supporters, in attendance as guests of the American contingent.

The guest book was handmade reportedly by T/4 Sho Nomura, and whether as a gesture of goodwill or respect, it lists Mao and his associates first in a semi hierarchical order. Mao and his wife, who was known to attend the American social functions, are listed first. Zhu De, who worked so closely with Mao that the duo became known collectively as “Zhu-Mao”, is listed second. Third, Zhou Enlai, the future First Premier of the People's Republic of China. Several of the signatures, for example Zhou Enlai and Ye Jianying, are signed in Traditional Chinese. It would not be until the 1950’s that character simplification would become a trademark of the Communist controlled People’s Republic of China.

Other associates of Mao from outside of the Party attended as guests of the Americans. This was a diverse cast of characters such as Michael Lindsay, a graduate of Oxford University who taught at Yenching University while smuggling supplies to the Chinese resistance, and later came to Yan’an to be a full-time radio technician for the Chinese Communist Party (CCP); Ma Haide, a Lebanese-American doctor living in Yan’an who personally saw to Mao’s health in 1936, and, after the Commnist victory in 1949, became the first foreigner granted citizenship to the People’s Republic of China; Sanzō Nosaka, here identified by his alias Susumu Okano, who lived in China secretly for three years and lead the Japaense People’s Emancipation League (JPEL) made up of POWs that were recruited voluntarily to fight on behalf of the CCP.