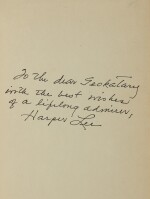 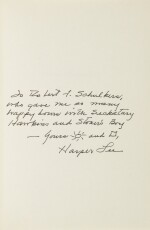 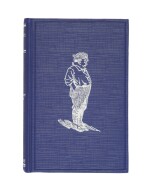 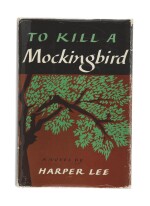 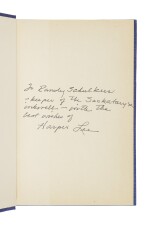 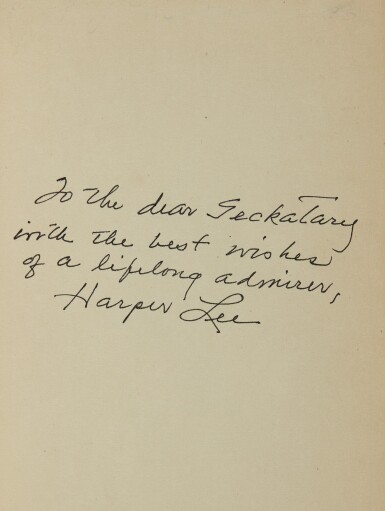 3 vols., 8vo. Pubisher's cloth and half cloth, all with dust-jackets. Gray Ghost quite worn and a bit shaken (see provenance). Mockingbird housed in brown cloth folding-case.

A remarkable group of books linking Harper Lee and her celebrated novel to the favorite books of her childhood. Seckatary Hawkins was the pseudonym for Robert F. Schulkers (1890–1972) was the author of eleven children's books published between 1921 and 1932. He wrote children's mystery-adventure books featuring a club house of boys led by Gregory "Seckatary" Hawkins and promoting the virtue of courage, friendship, decency, and honesty. The club's motto was "Fair and Square," which was adopted by the many Secketary Hawkins fan clubs that sprang up around the country—and which explains Lee's pictograph in her inscription to Schulkers in this copy of To Kill a Mockingbird.

Lee was introduced to the Hawkins series by her older brother, Edwin, and the present copy of The Gray Ghost was his copy and bears his ownership note on the front pastedown, "E.Ls book." Most significantly, Lee alludes to Schulker's Seckatary Hawkins books several times in To Kill a Mockingbird, and the concluding scene of her novel actually features Atticus Finch reading The Gray Ghost to Scout. Scout, who has fallen asleep, wakes up and begins to defend the supposed villain of the adventure, Stoner's Boy, to her father, thus underscoring a central theme of her own work:

"'Yeah, an' they all thought it was Stoner's Boy messin' up their clubhouse … An' they chased him 'n' never could catch him 'cause they didn't know what he looked like, an' Atticus, when they finally saw him, why he hadn't done any of those things … Atticus, he was real nice. …'

"His hands were under my chin, pulling up the cover, tucking it around me.

“'Most people are, Scout, when you finally see them.'”

The copy of Stoner's Boy included here was inscribed to Robert F. Schulkers's grandson, who struck up a correspondence with Lee (see following lot) and who now runs the Seckatary Hawkins Fair & Square Club. The Gray Ghost  is also mentioned in the 1962 film adaptation of Lee's novel. The University Press of Kentucky has recently published new editions of The Gray Ghost and Stoner's Boy.

The Gray Ghost belonged to Harper Lee's older brother, Edwin Lee, and is inscribed by him on the front pastedown "E Ls book." When he became a teenager, Edwin gave this book and many other similar works to Harper (see following lot)