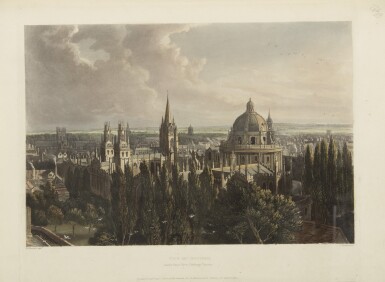 A History of the University of Oxford, Its Colleges, Halls, and Public Buildings. London: R. Ackermann, 1814. 2 volumes, 4to (14 5/8 x 11 3/5 in.; 365 x 290 mm). Half-titles, list of subscribers, 114 handcolored aquatint plates (including 33 of the founders), mixed first and second states according to Abbey, plain engraved portrait of Lord Grenville; some offsetting, some scattered foxing to preliminary leaves. Half brown calf, printed covers taken from the parts issue, spine with raised bands in six compartments, second and fourth with red morocco labels, gilt lettered, others with gilt fleur de lis motif; rebacked, overall wear to extremities, some rubbing to boards. Abbey, Scenery 278; Tooley 5. Provenance: Hermann Marx (bookplate to front pastedowns) — Sotheby's London, 19 April 1948, lot 154 — Sotheby's London, 2006, 16 November, lot 113. [And:] The History of the Colleges of Winchester, Eton, and Westminster; with the Charter-House, the Schools Of St. Paul's, Merchant Taylors, Harrow, and Rugby, and The Free-School of Christ's Hospital. London: R. Ackermann, 1816 [Watermarked 1812].