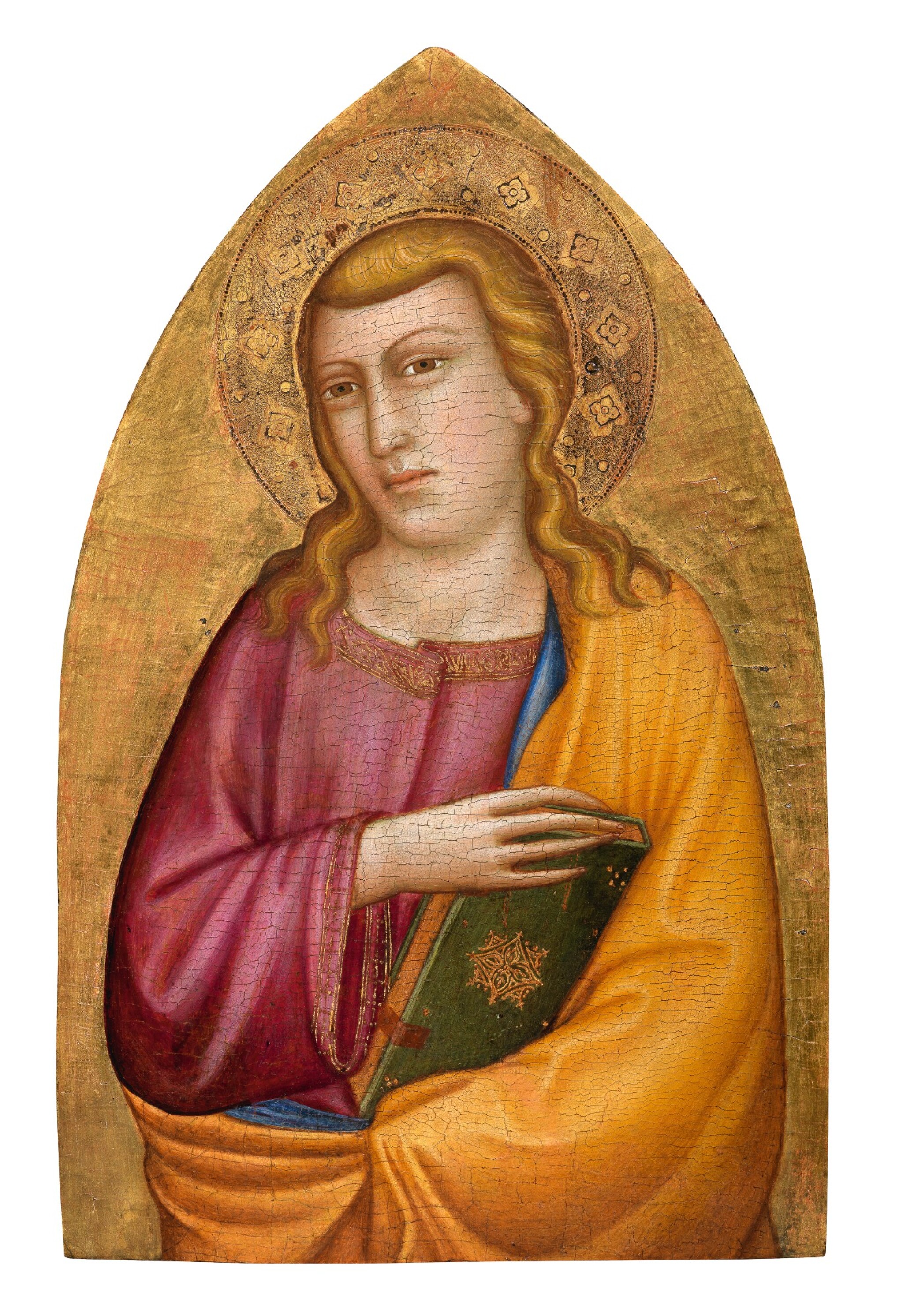 Overall this painting is in very good condition, with a recent and beautifully carried out restoration. The gold background, not including the halo, has been reinforced with gold leaf but retains an appropriate appearance of age. Although the majority of the paint layer is nicely preserved, the bottom two inches of the image is reconstruction; this work is well executed and not obvious in normal light. Notable restored losses include a small round loss in the yellow sleeve, near the crook of the elbow, and a horizontal loss crossing the upper arm on the left into the chest. Retouching has been judiciously applied to suppresses visually intrusive aging cracks, to address a modest number of tiny losses and minor wear, and to solidify the contour of the figure against the gold ground. Minor fading in the red lakes, a typical aging defect, has been addressed with restoration glazes. The varnish is clear with an even gloss. The vertically grained wood panel support, comprised of two boards is in sound condition. This painting shows no need of intervention and can be enjoyed in its current state.

This elegant depiction of Saint John is a recent addition to the oeuvre of Silvestro dei Gherarducci, one of the most influential artists in the second half of the 14th century in Florence. His artistic identity was unknown until 1957 when Mirella Levi d'Ancona recognized that the group of works formerly attributed to the Master of the Cionesque Humility were actually by Gherarducci.

Gherarducci was a monk at the Santa Maria degli Angeli, Florence, where he became its Prior in 1398 and led the scriptorium, the workshop devoted to the illumination of manuscripts. He was the eldest of a triumvirate of painters that included Simone Camaldolese and Lorenzo Monaco. All three lived and worked in the monastery, and they constituted the most important late medieval school of painters in Florence. In addition to his importance as an illuminator, Gherarducci achieved renown for his highly refined paintings on panel, as seen here.

Saint John the Evangelist gazes left, suggesting that this panel might have once been the right-side wing of a larger altarpiece. The punched decorations on the halo include a flower squared by four circles, an element repeated in Gherarducci's Madonna of the Humility from 1366-75 in the Galleria dell'Accademia, Florence.1 The physiognomy of the Saint's face is also consistent with that of the Madonna in the Accademia, as they both tilt their heads ever so slightly left, their almond-shaped eyes firmly gazing at the viewer. In light of the similarities between both works, this gold ground can also be dated to circa 1370.

The format and shape of this panel relate to a painting by Gherarducci of the Madonna and Child that Sotheby's sold in 2001.2 Both works show a figure against an empty gold ground, and while the Madonna holds the child, Saint John holds a book. Further similarities between both works can be appreciated in the elongated fingers of the proper right hand of each figure and the punched decoration of their halos.

We are grateful to Dr. Angelo Tartuferi for endorsing the attribution to Silvestro dei Gherarducci on the basis of photographs and for his assistance with the cataloguing of the present lot.