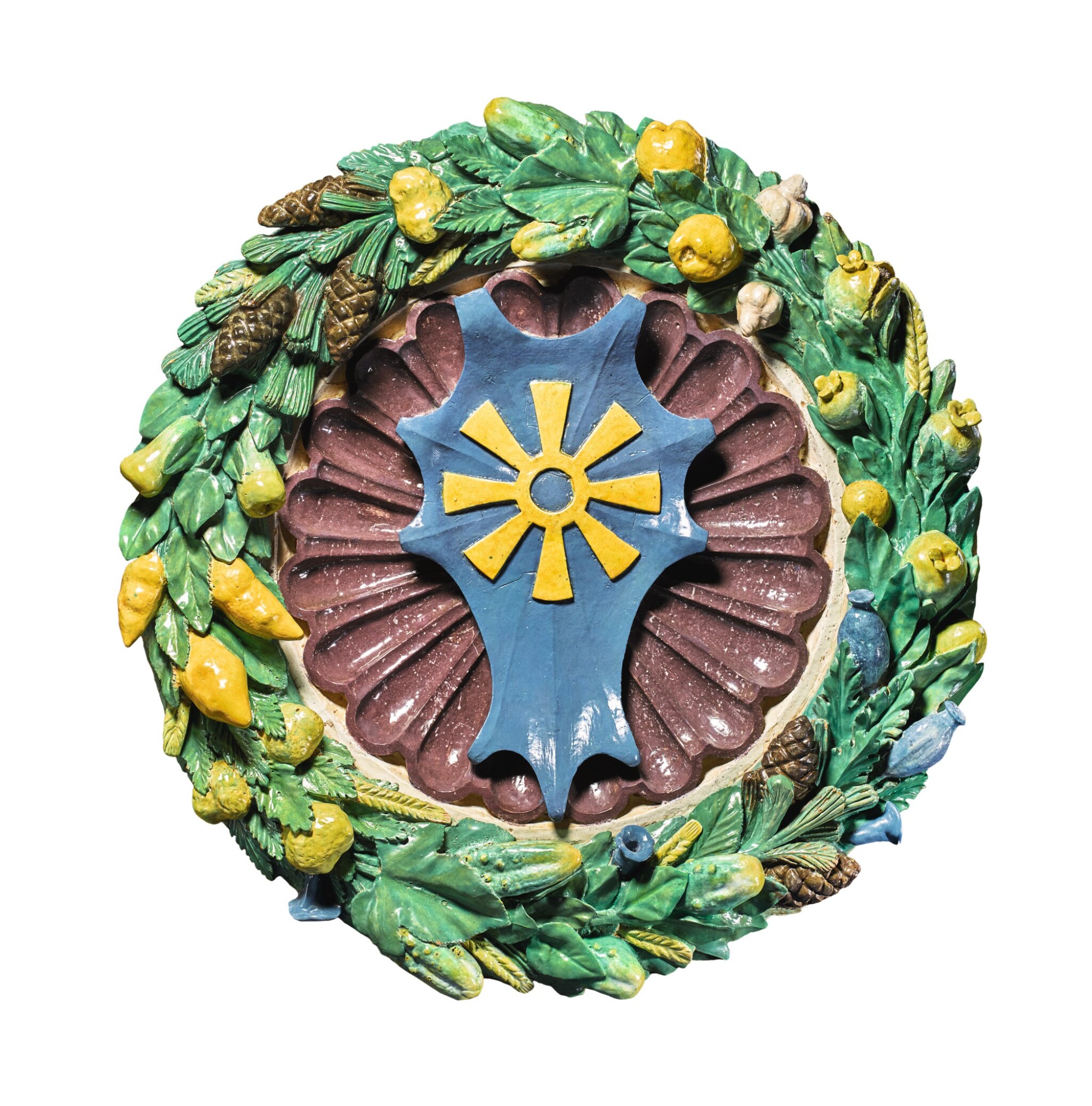 COAT OF ARMS OF THE BONSI DELLA RUOTA FAMILY

Please contact randy.reynolds@sothebys.com for a condition report on this lot.

The coat of arms are those of the Florentine Bonsi della Ruota family; Matteo di Giovanni di Tommaso Bonsi, was podestà (magistrate) of San Giovanni Valdarno between 7 May 1511 and 6 May 1512 (Stemmi robbiani 2014, op. cit., p. 163, no. 126). The device is set within a luxuriant vegetal garland of plants containing bunches of fruit and vegetables, their leaves are enlivened by field flowers. The roundel may have been destined for the façade a local palazzo podestarile, accompanied by a tablet with a glazed epigraph or scroll with the name of the office-holder or it may have been an independent work, marking one of the Bonsi family residences, placed above a portal or in the vault of a porch or large chamber.

The medallion was presented at a Della Robbia exhibition held in Arezzo (I Della Robbia 2009), in one of the venues of the Itinerari in Valdarno, in the Museo di Santa Maria delle Grazie in San Giovanni Valdarno (Fornasari 2009, pp. 393-395), and more recently as part of a weighty volume on Della Robbia heraldry, always with an attribution to Giovanni della Robbia (Stemmi robbiani 2014, p. 163, no. 126). Further research carried out for Sotheby’s Glazed exhibition in 2016 has enabled us to trace its prestigious provenance from the remarkable collections of the Florentine collector and dealer Count Alessandro Contini Bonacossi (Ancona 1878 - Florence 1955), displayed in 1931-1932 and until 1955 in his magnificent Florentine residence, the Villa Vittoria, now the site of the Palazzo dei Congressi (Villa Vittoria 1995). This is documented in several photographs, probably taken as part of the extensive campaign of the early 1930s by the Jacquier workshop (Tamassia 1995, pp. 14, 62). One of these (in the photo archive of the Kunsthistorisches Institut in Florence) is centred on the medallion, while in others (G. Gentilini archive, from the heirs of the Contini Bonacossi family), that were intended to document the interiors of the Villa Vittoria, the Bonsi stemma is shown appearing over a door of the first-floor gallery, flanked by a similar work with the Strozzi arms. Apart from its celebrated paintings, sculpture and important furnishings from the Italian Renaissance, the Contini Bonacossi collection was also rich in Della Robbia terracottas, including a substantial number of medallions with heraldic shields including: those of the Della Stufa family, given to the workshop of Luca and Andrea della Robbia, the Pazzi and Del Monte arms attributed to Giovanni, and the Caiani da Diacceto ascribed to Luca the Younger (Gentilini 1992, pp. 137, 307, 356). These still form an invaluable core of the collection donated by the family after 1955 to the City of Florence, and now housed in the Uffizi Gallery (Stemmi robbiani 2014, pp. 166-171). Similarly, our medallion has retained its own moulded and gilded wooden frame, sober and elegant, which we may imagine was made by the well-known architect Giò Ponti, who was responsible for the sophisticated Art Deco furnishings of the Villa Vittoria in 1931-1932 (Il mobile déco 1988, pp. 209-223, especially p. 214).

Here, even if the numerous sons of the industrious master were capable of working independently, they continued to be active alongside their father until his death in 1525. They produced works of every kind, and even used collaborators (such as Giovanni’s three sons, Marco, Lucantonio and Simone, mentioned by Vasari) to satisfy the needs of a huge number of ecclesiastical and private patrons (Marquand 1920; idem 1928; Gentilini 1992). In fact, in the perfection of its beautiful lobed bowl, this medallion seems more in line with the artistry of Andrea. Yet, the refined naturalism of the vegetal garland, which does not have the older master’s special plastic brilliance and sober compositional conception, evinces greater affinities with the imaginative, decorative and narrative vein of Giovanni, well-documented in the numerous heraldic medallions executed in his shop during the 1510s and 1520s (for example: the coats of arms of Giannozzo Gianfigliazzi, Cutigliano, 1514; of Francesco Altoviti Lari, 1524; and of the Squarcialupi family, New York, Metropolitan Museum of Art, c. 1520: see Stemmi robbiani 2014, pp. 204, 227).

However, what differs from the style of Andrea and Giovanni, apart from the shape of the shield, is the denser, less lively glazing, and the unusual dynamism of the garland. The fruits and vegetables here are arranged in a more casual manner, which lends the wreath an almost rotating rhythm. These aspects would suggest the author to be Giovanni’s brother Marco della Robbia (known as 'Fra Mattia' after he took Dominican vows in 1496 at the Convent of San Marco in Florence). He was the first to follow the teachings of Andrea while maintaining similar style and composition to that of his famous brother (and frequent collaborator) Giovanni. Marco’s was a popular idiom, marked by occasionally rougher modelling, and a linear and restless graphic approach, consistent with the production of devotional works principally destined for Dominican convents (Gentilini 1992, pp. 372-375).

The work discussed here bears eloquent witness to the artistic interaction between the members of the Della Robbia family during the first decades of the 16th century, and represents further evidence of the success of this type of work between the 1470s and the first four decades of the 16th century. In fact, it is to Andrea’s shop, followed by those of his sons, that deserves credit for having made glazed terracotta coats of arms and heraldic ornaments among the most appreciated elements of civic and residential buildings in the Renaissance. They were distinctive works, typical of the Della Robbia studio, and their vivid, colorful glazes, made for particularly beautiful and popular expressions of heraldry. The genre has long been treasured by collectors on an international scale – the Contini Bonacossi are an excellent example – but it has also garnered the interest of scholars; and now, nearly a century after Allan Marquand’s fundamental repertoire, Robbia Heraldry (1919), we have seen the publication of the monumental illustrated catalogue Stemmi robbiani in Italia e nel mondo (2014).