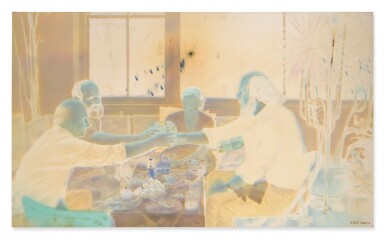 CHEERS! FROM THE NEGATIVES CYCLE

signed with initials in Cyrillic and dated 90 l.r.; further signed, titled and inscribed in Latin and dated on the reverse

Original canvas. There are several surface scratches with minor associated paint loss to the lower left as well as minor scratches and abrasions elsewhere. Some cracks to the paint surface are visible in places, most notably along the top edge above the plant on the far right. There is a small fleck of paint loss to the wall to the left of the window. There is a light layer of surface dirt with some staining in places, most notably a few drip marks along the left edge. Inspection under UV light does not reveal any obvious signs of retouching. Unframed

After graduating from the Moscow Architectural Institute in 1972, Semyon Faibisovich started his official career as an architect, allowing him to discretely pursue his own artistic projects on the side. In 1976 he began showing his work at an underground exhibition space on Malaya Gruzinskaya street, where in autumn 1985 he caught the eye of art dealers from New York. Since 1987 his paintings have been exhibited widely in the USA, Western Europe and Russia. This year the State Tretyakov Gallery held the first major retrospective of Faibisovich's work, timed to coincide with the artist's 70th birthday.

The present lot belongs to a series of works executed during the artist's stay in New York between 1988 and 1990. Based on the principle of the photographic negative, this series is a metaphorical reference to the strange, through-the-looking-glass quality of Faibisovich's experience of America.