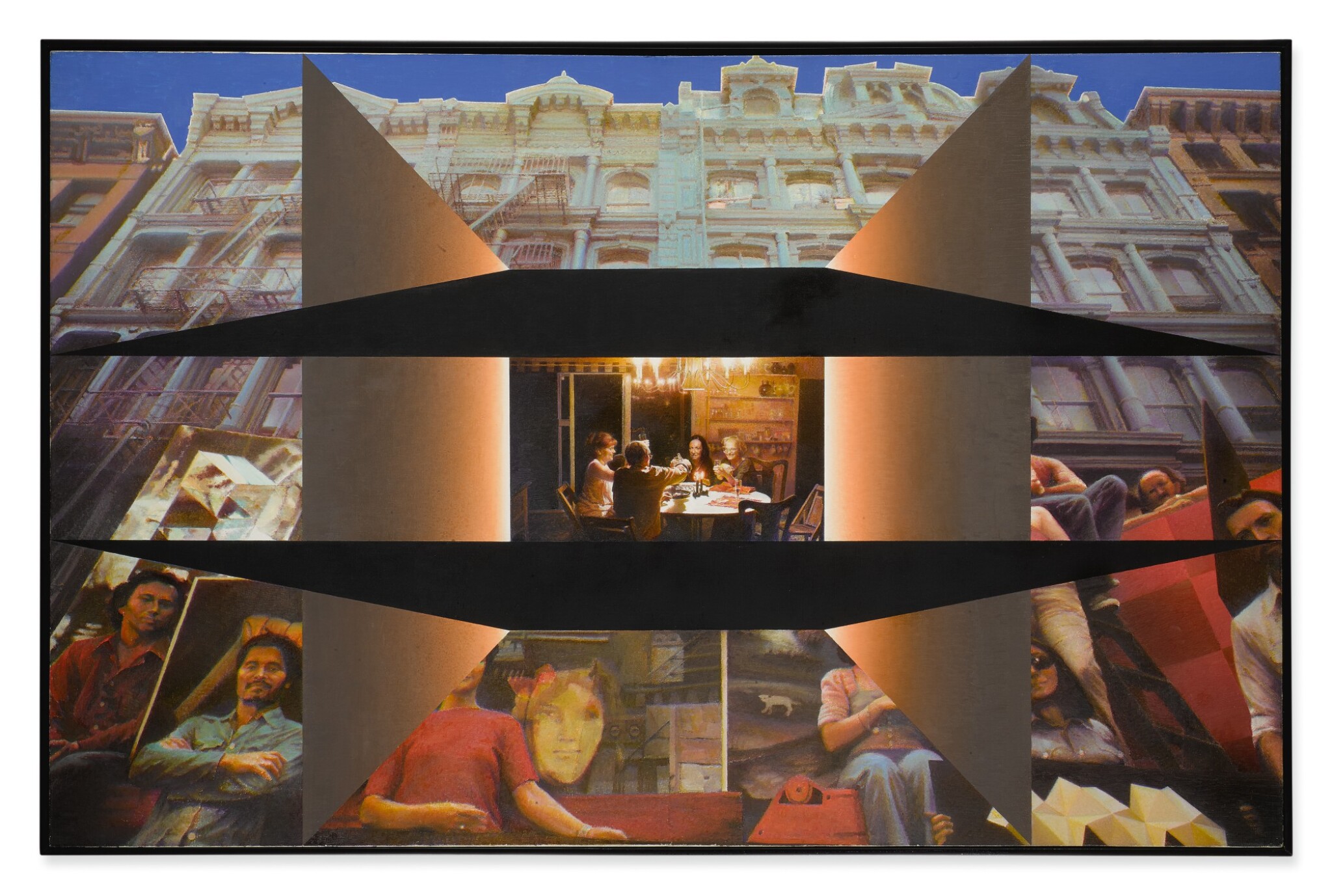 Original canvas. There are minor frame abrasions along the edges. Fine cracks in the blue of the sky are visible in the center of the upper edge and in the black wedge in the upper left. Faint staining is visible in the areas of black and there is a light layer of surface dirt. There are a few minor scuffs to the surface, otherwise in very good condition. Inspection under UV light reveals no obvious signs of restoration. Held in a simple black tray frame.

Acquired from the above by Morten H. Kielland, Geneva

Oleg Vassiliev never considered himself a political artist. Nevertheless, his work was essentially suppressed in the Soviet Union where ‘even this pursuing of one's own work was criminal, according to the principle 'He who is not with us is against us’ (O.Vassiliev, How I Became an Artist, Cologne, 1997). His first and last solo exhibition in the USSR was a one-night show at the underground Blue Bird Café on Chekhov Street in Moscow in 1968. Following the dissolution of the Soviet Union in 1991, the artist moved to the United States, where he was finally able to work and exhibit freely alongside his friends and fellow artists, Erik Bulatov and Ilya Kabakov.

Artists in New York is one of Vassiliev’s most important post-emigration works. Capturing the artist’s experience of living in the United States for the first time, the painting is a major crossover piece, linking East and West. In his 1991 interview prior to a personal exhibition at Phyllis Kind Gallery in New York, the artist commented ‘Life in New York is strikingly diverse and heterogeneous, it has room for everything, and everyone sees it in his or her own way. The construction I used allows me to juxtapose these diverse aspects of life, opening up different spaces. In the construction itself, I tried to convey the summarized image of this space’.

The central section of this work is based on a photograph taken by Erik Bulatov at Phyllis Kind’s out-of-town house, depicting the artist himself, his wife Kira Vassilieva, Natasha Bulatova and Phyllis Kind - the New York gallerist with whom Vassiliev had a contract in the late 1980s-early 1990s. According to the artist’s son Alexei, the characters arranged around the panels are the workers, electricians and carpenters responsible for the hanging of the 1991 exhibition, whereas the architectural setting is a view of Phyllis Kind Gallery in Greenwich Village.