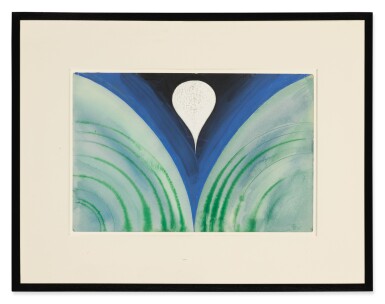 Property from the Family of the Artist

Property from the Family of the Artist

signed with initials and dated 75 l.r.; further signed in Latin, inscribed Glamorous and dated on the reverse

gouache and watercolor over pencil on paper

The sheet is undulating slightly. There are pinholes to the lower corners. The corners are slightly worn and there are nicks to the edges. Some minor surface scratches are visible in places and there is a light layer of surface dirt. Some minor cracks are visible in the area of white impasto. The remnants of an old adhesive are visible in places on the reverse. The sheet is hinged to the mount in the corners and along the edges. Held in a simple black wooden frame behind glass.

Durham, Duke University Museum of Art, Birth of an Image, 1998

Lamm originally studied architecture at the Construction Institute of the Moscow City Council where he was taught by the constructivist architect and leading exponent of architectural futurism Yakov Chernikhov. Through Chernikhov, Lamm was fortunate enough to be exposed to the work of Vladimir Tatlin and Kazimir Malevich whose artistic legacy had otherwise been erased from the pages of art history by the Soviet censor. This early training was to have a significant influence on his understanding of form and volume, indeed he was one of the first in post-war Russia artists to turn to abstraction: in 1954.

That same year he graduated in fine art at the Moscow Polygraphic Institute, Lamm pursued a career as an illustrator which enabled him to discretely work on his own projects. After submitting documents for emigration Lamm was arrested (1973-1976), however his work, as previously, was exhibited in the USSR and in the West. In 1982, realizing the impossibility of implementing his projects, the artist immigrated to New York. There he successfully continued his creative career until the end of his life.

Many of his works are in the permanent collections of museums such as Solomon Guggenheim and The Metropolitan Museums, New York, The Stedelijk Museum, Amsterdam, The Centre Pompidou, Paris, The State Russian Museum, St Petersburg, The State Tretyakov Gallery, Moscow and many others.