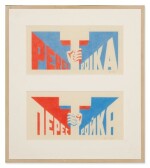 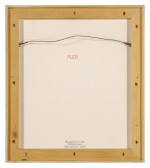 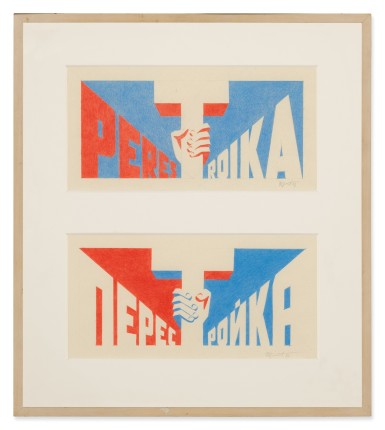 each signed in Cyrillic and dated 89 l.r.

colored pencil over pencil on paper

The works are executed on two separate sheets which show minor creasing throughout. The right edges of both sheets are slightly undulating. The sheets have discolored and there is faint mount staining along all the edges. There is some incipient foxing in places, most notably to the 'T' of the top work. The sheets are hinged to the mount in the corners and are held together in a simple wooden frame behind Perspex.

After graduating from the Surikov Art Institute in Moscow in 1958, Bulatov pursued a successful career as a children’s books illustrator, discretely working on his own projects. His involvement in the Sots-art movement in the late 1980s earned him the moniker the ‘artist of perestroika’, whose work symbolized the advent of a new era in Russian art.

Executed in 1989, the present lot belongs to a series of works dedicated to the subject of perestroika – the political and economic reforms implemented by Mikhail Gorbachev and meant to kickstart the stagnant economy of the Soviet Union. Bulatov’s painting is simultaneously a tribute to perestroika and a definitive statement of perestroika’s inescapably Communist nature. Although associated with great expectations for radical changes in the society, the movement remained fundamentally Soviet in its methods and vocabulary.

One of the eminent features of Bulatov’s art is the superimposition of text on illusionistic space and realistic scenes, as can be seen in Perestroika. The presence of text in this work evokes immediate associations with Soviet propaganda posters and banners and alludes to the government’s oppressive power over society. As Bulatov has explained, ‘Soviet ideology completely distorted our whole life. And this distorted space, full of ideology, became ordinary, customary and normal… Therefore, in my pictures, I tried to show that this kind of normality is not normal’.