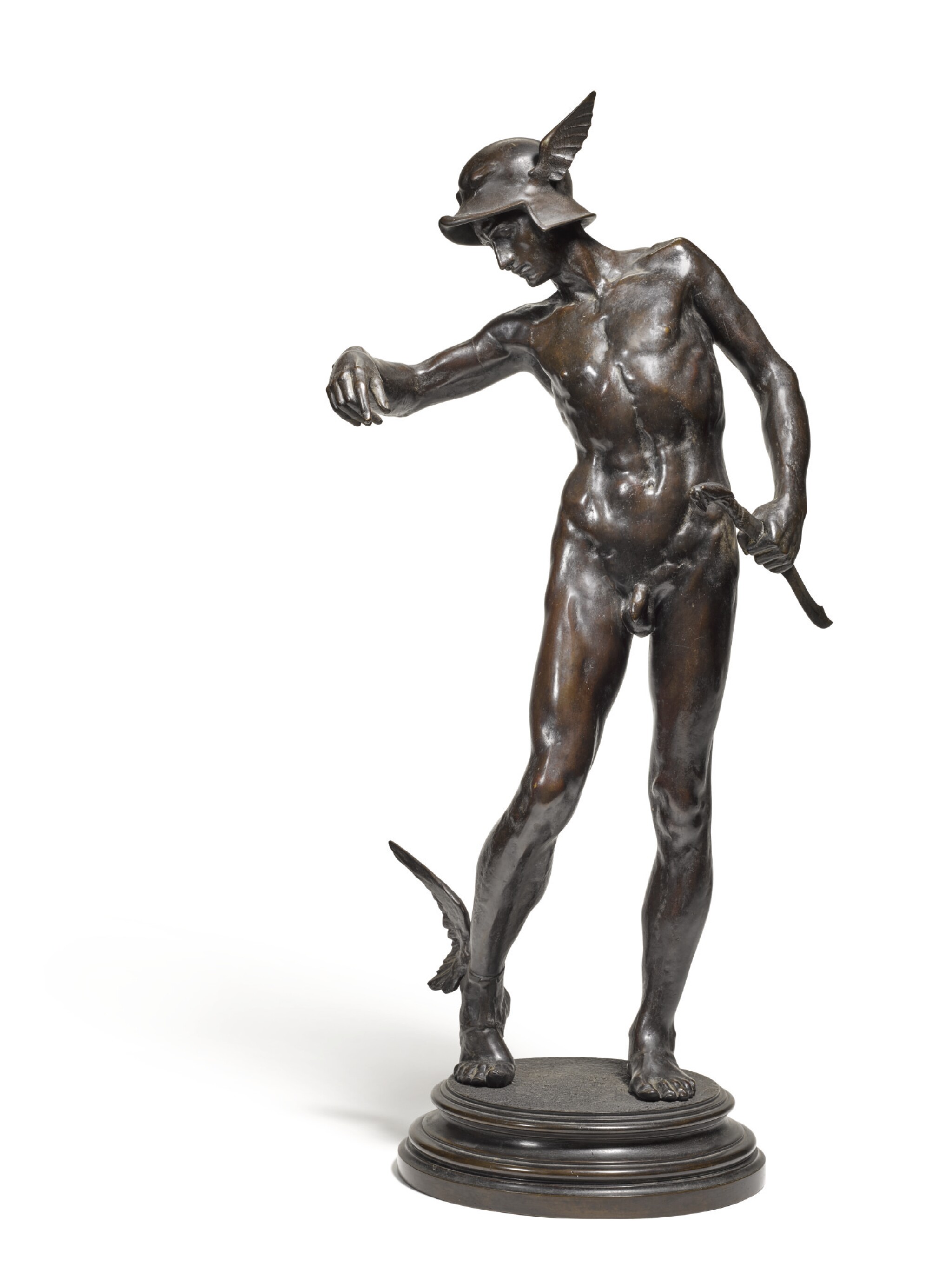 Overall the condition of the bronze is very good with minor dirt and wear to the surface consistent with age. There are original stable casting joints at the tops of both arms and legs. There are also a few slightly visible original plugs. There are some minor scratches and abrasions to the patina. The proper left helmet wing detaches and there are traces of metal solder restoration. The patina is a little dry and would benefit from a wax. Minor pitting to the bronze.

The Perseus comprises one of Gilbert's three ‘autobiographical’ bronzes, the others being Icarus and Comedy and Tragedy. These three models represent Gilbert during his most creative decade from 1881 to 1892, from his mid-twenties to his maturity in his late thirties. The idea was, as Gilbert described it, to take ‘an old fable’ and move on from the literal text to ‘that which is implied'. Perseus and Icarus have direct mythological reference, whilst Comedy and Tragedy is an original subject with a clear Grecian reference in the mask of Tragedy. As a group their potency is created by Gilbert’s reinterpretation of classical subjects and artistic references, which whilst being timeless themes, we perceive through Gilbert's eyes, thereby making us see them afresh. So, in Perseus' attributes – the winged helmet and sandal –we clearly identify the mythological character, but the moment in which he is represented has no iconographic reference. Here he is shown in a moment of introspection, of vulnerability, of natural unselfconscious eloquence. It is a view of the mythological character which we have never seen before.

Gilbert made his plaster model of Perseus Arming in Rome in the winter of 1880-1 and exhibited the lost-wax bronze cast at the Grosvenor Gallery in 1882. It was received with critical acclaim both in London and at the Paris Salon the following year, where it earned Gilbert an honourable mention and secured his international recognition as the foremost British sculptor of his generation.

Commenting on his success in Paris, Gilbert wrote that it ‘gave me great encouragement to continue the task I had set myself- that was, to go on writing my own history by symbol’. Gilbert’s description of Perseus Arming continues: ‘I conceived the idea that Perseus before becoming a hero was a mere mortal, and that he had to look to his equipment’ and so Gilbert quite literally depicts Perseus looking over his shoulder to inspect his winged sandal: ‘a youth vulnerable, untested, but equipping himself for the trials of life’.