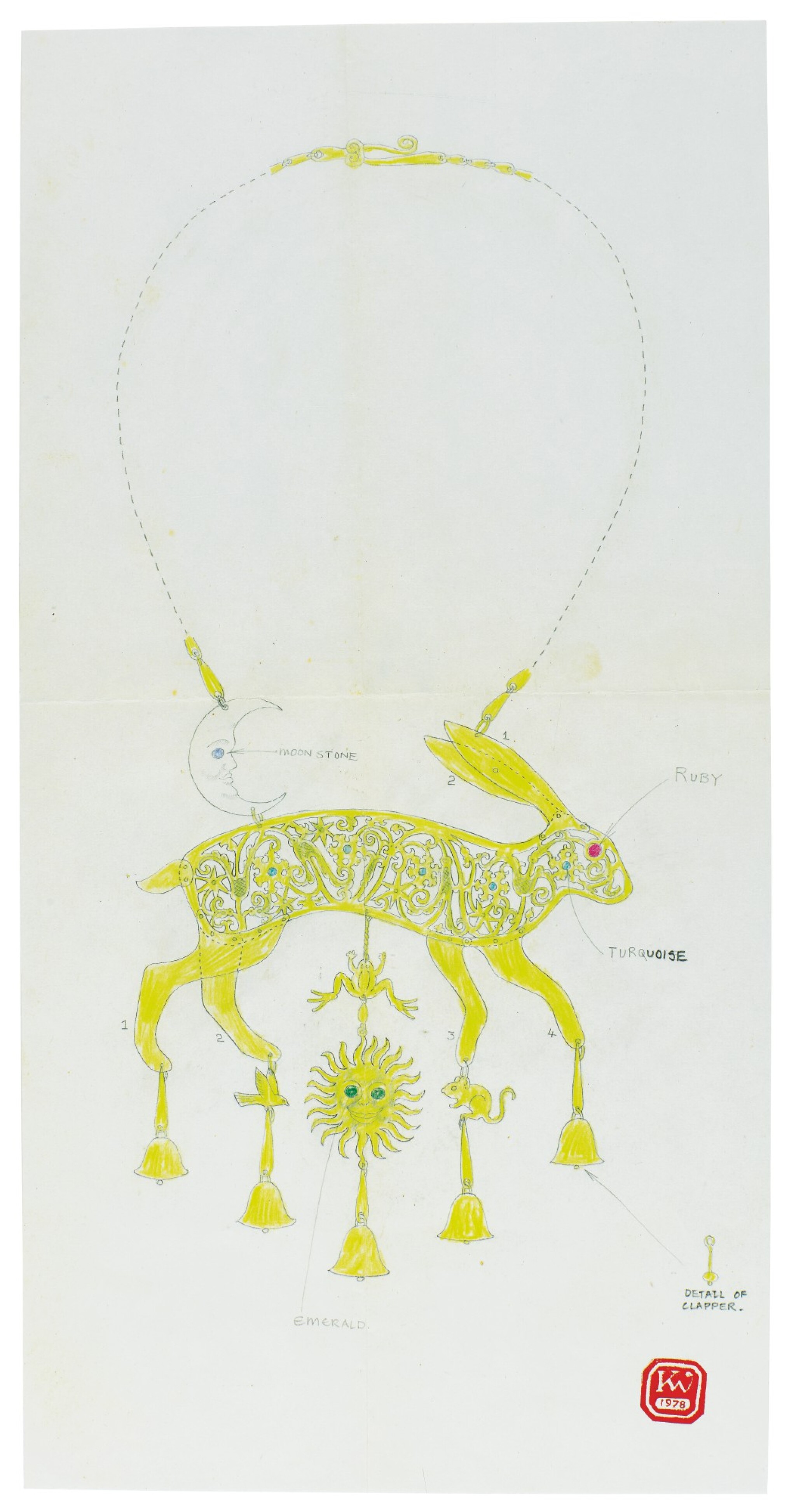 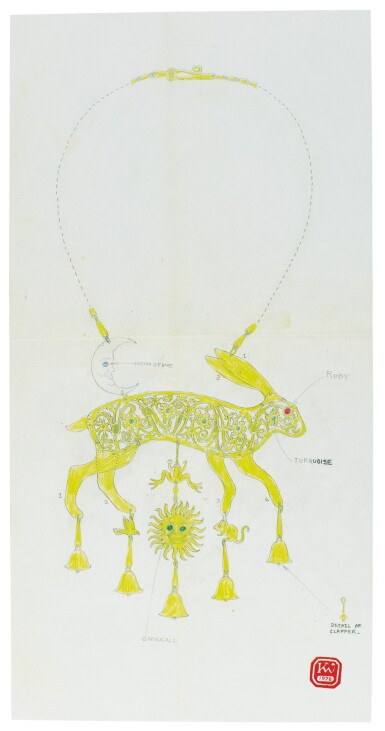 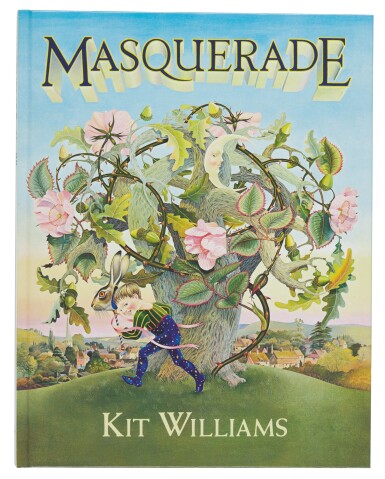 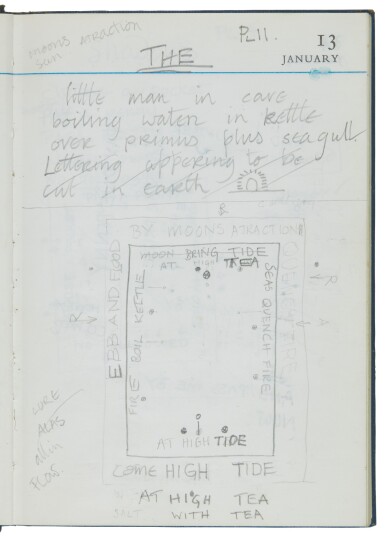 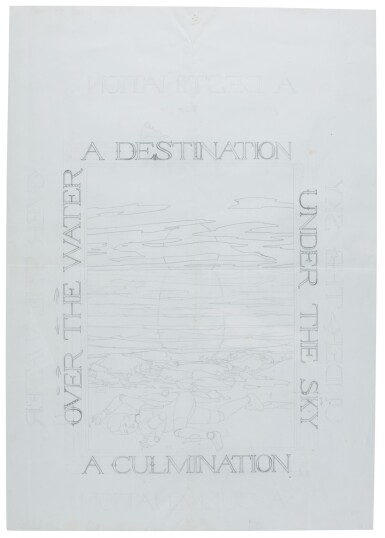 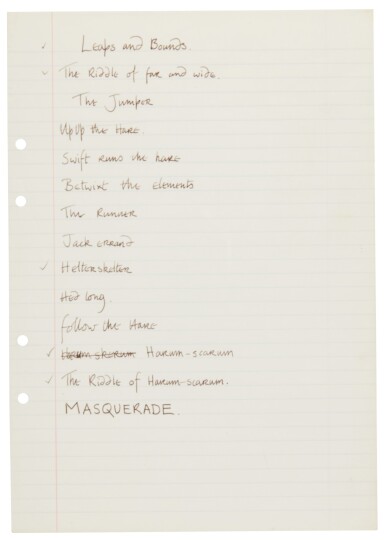 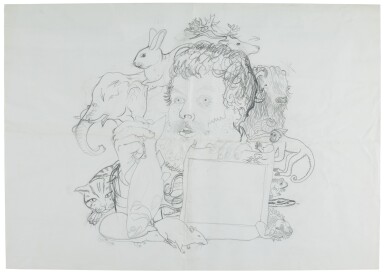 An archive of material relating to Masquerade, comprising:

i) The Artist's notebook, comprising Collins Any Year Diary (Collins, 1971) with 112 pages of notes, diagrams and sketches relating to the planning of Masquerade with preliminary drafts of text, detailed notes on creation of the book’s riddles and codes, plans on use of lettering, drafts of letters to the publisher, diagrams on physical manufacture of the book and diagrams showing location of treasure

i) 2 typed letters signed from the publisher Tom Maschler to Kit Williams, 17 December 1976 and 2 November 1979

iv) 54 sheets of pencil preliminary drawings on both paper and tracing paper for 14 (of 15) of the published illustrations, several with additional tracing paper additions secured by adhesive tape and some marked up with grids

vi) 5 sheets of pencil preliminary drawings on both paper and tracing paper for abandoned illustrations, one marked up with grids

i) 2 black and white publicity photographs of Kit Williams

ii) Black and white publicity photograph of the Golden Hare

"Never before have so many people looked so intently at such rich but random material (sixteen paintings and some four thousand words) hoping to discern within them a hidden truth."

Kit Williams has stated that he "wanted to retain the format of a book but then do something different... I thought I would... make a real treasure from gold, bury it in the ground, and use riddles to lead people to it." The resulting book, Masquerade, became the start of "international lagomania" [the morbid and insatiable craving for a hare]. As Gascoigne notes "...this undoubtedly infectious condition was to spread from its initial outbreak in September 1979 in Britain and the Commonwealth (400,000 copies) to France that same autumn (5,000 copies) and then to Germany (30,000 copies), to the United Stated (400,000 copies), to the Netherlands (10,000 copies) and to Italy (20,000 copies). The final outbreak was in Japan..." At one point Laker Airways offered ten-day "Masquerade Tours" to the U.K., including a free spade.

The hare was discovered in February 1982 by Ken Thomas, although the book's riddle was solved at the same time by Mike Barker and John Rousseau. The 1982 edition of Masquerade included a solution to the book and Gascoigne's Quest for the Golden Hare provides "the perfect solution" submitted by Barber and Rousseau. The hare itself was sold in these rooms, 5 December 1988, for £29,000 (against an estimate of £3000/5000). In Quest for the Golden Hare Gascoigne notes that among Williams' "...papers there is a most evocative item for anyone interested in Masquerade. It is the battered blue notebook in which he worked out all the mechanics of the puzzle".

It is that "evocative item" together with the artist's extant preliminary drawings and other archival material that is now offered for sale, on the fortieth anniversary of Masquerade. They reveal for the first time the artist’s conception of this worldwide phenomenon.