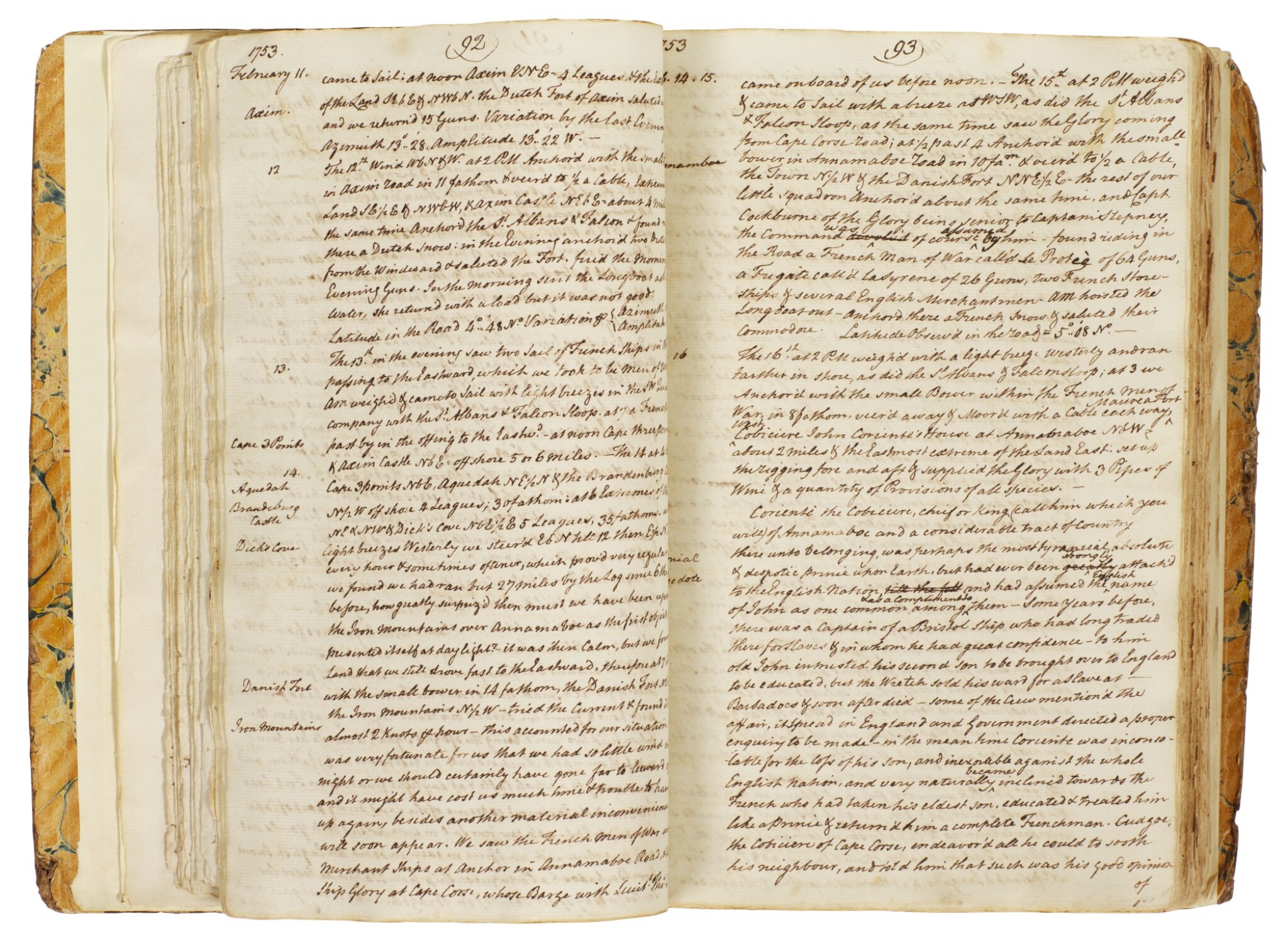 recalling, in vivid and detailed prose, his early years in the Royal Navy, especially his service in India, from 1750 to 1761, a working manuscript with scattered corrections and revisions, some passages crossed through (probably for reasons of indecency) drawing on his contemporary logs and therefore carefully dated throughout, as well as memories and also other sources, 1770s, 591 numbered pages, folio, contemporary marbled boards, some leaves frayed at edges, occasional leaching of ink, covers worn and rebacked with new endpapers

A LIVELY AND UNPUBLISHED MEMOIR OF A YOUNG NAVAL OFFICER’S ADVENTURES IN INDIA.

William Owen (1735-?78) obtained a position as a midshipman on HMS Sphinx in April 1750 and was soon in service around the Mediterranean, the North Sea, and the Atlantic as far as the Caribbean. His first years at sea were full of incident: he narrowly escaped assassination when transporting treasure to Amsterdam, observed first-hand the slave factories of West Africa, and survived epidemic disease that laid waste to the crew of his ship in the Caribbean.

For most of the period covered by this journal, however, he was in the East Indies, where he took part in events of great historical significance. He spent seven years (1754-61) in the sub-continent, mostly in Bengal, Madras (Chennai) and the wider Carnatic region, or on the island of Sri Lanka. These were pivotal years during which a series of regional wars transformed the British East India Company from a trading company to a colonial power, and Owen provides a vivid first-hand account of a period of near-constant warfare. He took part in the suppression of the Maratha Tuloji Angre, who preyed on European shipping from his base in Geriah (Vijayadurg) - this was the first of several actions in which he was commanded by Robert Clive. He was in Madras when Clive heard that Calcutta had been captured by the Nawab of Bengal and took part in the campaign that retook the city. He was present at the capture of Chandannagar and the Battle of Plassey in 1757, which secured Bengal for the British, and also at later naval actions further south in the Bay of Bengal that culminated in the capture of Pondicherry from the French. He describes pirate hide-outs, humiliated European traders ruined by reversals in war, tensions between the Dutch and the kingdom of Kandy in Sri Lanka, drunken escapades in Madras, the stupendous rewards for those involved in the Bengal campaign (Owen’s share, as a mere master’s mate, was over £800), the ruinous storm that annihilated much of the British fleet near Pondicherry, and the rituals that accompanied a meeting between his commander and Mahomed-Ally Nabob of Arcot (“…The Nabob ordered a rich perfume of what is called the Otta of Roses to be brought him, a few drops of which he put into his hand, and having himself opened the bosom of Mr. Watson’s shirt, he rubbed the same over his breast; he afterwards did the same to Mr. Pocock, and his Buckshy or Treasurer performed the like ceremony on the rest of the officers & gentlemen. Beetel-nut & chunam were then most plentifully distributed & showers of rose-water fell upon all…”). He was shot in the arm in Bengal, and later at Pondicherry had the entire arm blown off by a French cannonball (“…It was somewhat strange, that my hand, though severed from my body, still grasped a silver half basket hilted scymitar, the present of my good friend Captain Latham, and that the shot neither stunned, staggered, nor even moved me…”). On one particularly foolhardy hunting trip in Trincomalee (Sri Lanka) in 1759, Owen and his companions had a close encounter with a tiger, escaped from homicidal bandits, lost themselves in the jungle, avoided being eaten by a crocodile (it was sated from a large and prickly meal of porcupine), and nearly died of thirst on their return – all in the space of 48 hours. Owen’s adventures are retold in clear and lively prose, of which his account of the “Calcutta Gauntlet” in February 1757, when Clive marched his forces right through his enemy’s camp, provides a good example:

“…About seven o’clock the fog cleared up, and to our inexpressible concern, we perceived our mistake when too late to rectify it, for the enemy were posted to all possible advantage & security behind an entrenchment made some years ago before by the English, for the defence of Calcutta against the Maharattas, where they had likewise planted forty pieces of cannon, many of them of 32 & 24 pounders & designed as battering cannon against Fort William: indeed had they known the proper use of these, few of us would have been left to relate the story.

“About half past eight o’clock a large body of cavalry moved round by our left with the apparent view of surrounding us, orders were now given to prepare for forming the hollow square and not a shot to be fired till the enemy were advanced within point-blank; but Captain Pershow of the Company’s Artillery, (the best marksman I ever saw with a field piece) desiring leave to fire one shot, only, and the colonel indulging him, in what he thought a folly, he fired and brought down their Standard bearer, horse and all to the ground, upon which the whole body faced about & galloped off with the utmost precipitation.

“Keeping on our march & sustaining a constant cannonade from the Enemy, with some vollies of small arms & arrows from behind hedges & ditches, a little past nine we gained the Pass at the Bungelo Redoubt, at the end of great avenue leading to Calcutta, and got up the two van field pieces just in time to maintain that pass against the enemy, who were advancing up very fast up the great avenue leading from the Bungelo to Omichand’s Garden in order to dispute that pass with us.

“A very warm cannonade now began & on our part the most successful one I ever saw; the enemy stood it for near an hour, then began to retreat with, as we could easily perceive, some of their elephants dropped & their ranks much thinned…”

This portion of Owen's narrative of his life ends with his return to Britain via the Cape, but his later life was no less full of incident. He travelled to Canada in 1766, lost an eye in an election fight in 1768, and in 1770 established the settlement of Campobello in New Brunswick. He wrote to his friend Sir Thomas Rich in 1775 that "I am busily employed in writing my voyages and travels in all parts of the world", and mentions his memoirs in a codicil of his will dated 9 August 1778. A second volume of his narrative, covering his North American adventures, is held by the National Maritime Museum. This second volume has been published as Narrative of the American Voyages and Travels of Captain William Owen, ed. V.H. Paltsits (New York, 1942) but THE CURRENT MANUSCRIPT IS UNPUBLISHED AND IS A REMARKABLE NEW HISTORICAL SOURCE.