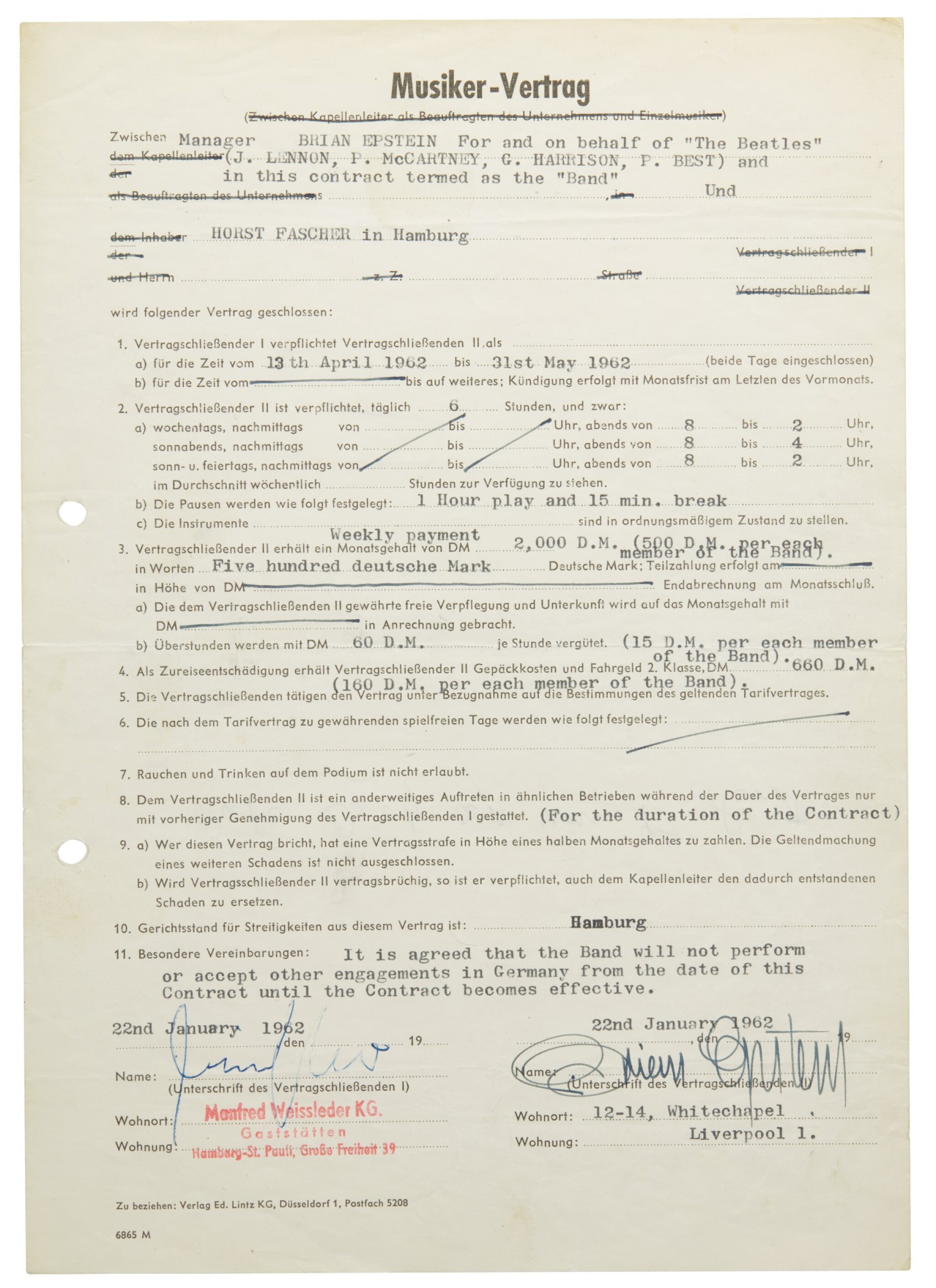 A collection of material relating to their Star Club, comprising:

(i) Brian Epstein, document signed, performance contract for The Beatles with Horst Fascher in Hamburg, signed by Manfred Weissleder, confirming their employment from 13 April to 31 May 1962 for a weekly payment of 500 DM each, 1 page, folio, 22 January 1962; (ii) Horst Fascher, typed letter, to Brian Epstein, making arrangements for The Beatles's forthcoming visit to Hamburg, in German, with typed English translation, altogether 2 pages, folio, 22 February 1962; (iii) Four Arbeitserlaubnis [Work permits], one each for John Lennon, Paul McCartney, George Harrison and Peter Best, "Musiker" employed at "Star-Club Hamburg Gr. Freiheit 39" from 13 April to 31 May 1962, each with official stamp and signature and dated 14 May 1962

OFFICIAL DOCUMENTS RELATING TO THE BEATLES'S PENULTIMATE STINT IN HAMBURG. They had been booked as opening act for a new club just off the Reeperbahn, The Star-Club, which immediately became the city's leading rock venue. This was the first Hamburg tour arranged by Brian Epstein, and they were paid more than on previous visits despite performing for fewer hours; nevertheless the four musicians still shared a single room (above a strip club) and kept themselves going through a combination of Preludine and booze. The contract is signed by the owner of the Star-Club, but the named counterpart is the club's colourful manager, Horst Fascher.

The trip was overshadowed by the death of Stuart Sutcliffe just three days before their first gig. George flew to Hamburg with Stu's mother and it was only when they went to meet him at Hamburg airport that the rest of the band - who had flown earlier - learnt of the death of their friend. The response of the band, and especially John, was to throw themselves into the hedonism of Hamburg's red-light district even more wildly than on previous visits. Fortunately, Horst Fascher was responsible for the band's welfare: he was a former boxer who had found his way to Hamburg's music scene after his release from prison for killing a sailor in a street fight and had known The Beatles since their first trip to Germany in 1960. He could usually bring the Beatles under control (even John) but this trip is still the occasion of many of their wildest antics - which are almost always of disputed authenticity - from introducing innocent friends to transvestite clubs to urinating on a group of passing nuns.