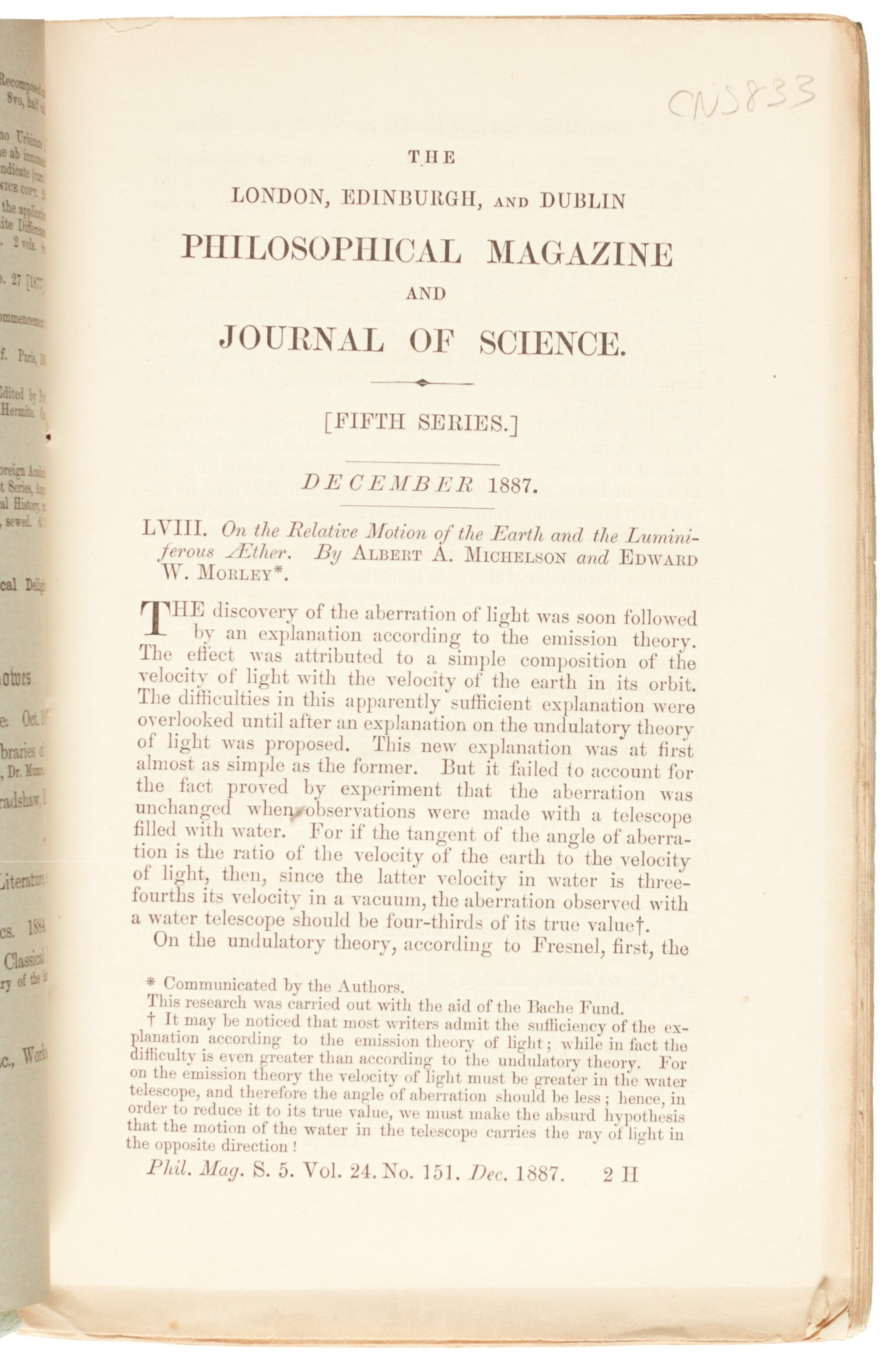 "On the Relative Motion of the Earth and the Luminiferous Aether", [pp.449-63 in] The London, Edinburgh, and Dublin Philosophical Magazine, and Journal of Science....Fifth Series. No.151...Taylor and Francis, December 1887

RARE. THE FIRST EUROPEAN PRINTING OF THE ACCOUNT OF THE CELEBRATED MICHELSON-MORLEY EXPERIMENT, WHICH LED DIRECTLY TO EINSTEIN'S THEORY OF RELATIVITY. The first American printing occurred a few weeks earlier in The American Journal of Science.

Michelson and Morley record the famous experiment -- which has been said to be the starting point for the theory of relativity -- they undertook in 1887 at Case Western Reserve University. The experiment is generally considered to be the first strong evidence against the theory of a universal luminiferous ether (a medium for the propagation of light). It was a fundamental principle of Newtonian theories of the universe that such an ether existed and that it surrounded the earth (just as water waves required a medium to move across, and audible sound waves required a medium to move through, so, it had been thought, light waves needed a medium of their own.) Because the speed of light is so great, designing an experiment to detect the presence and properties of this ether took considerable ingenuity. To perform the experiment Michelson designed an interferometer, for which he subsequently won the 1907 Nobel Prize in Physics. This device enabled the scientific pair to measure the speed of light in different directions, in order to measure speed of the ether relative to Earth, and thereby establish its existence. Although Michelson and Morley were expecting to measure different speeds of light in each direction, they found no noticeable difference in any orientation or at any position of the Earth in its annual orbit around the Sun. "This negative result held revolutionary implications which led directly through Lorentz and Einstein to the acceptance of new standards of time and space from geometry and cosmometry" (Dibner Heralds of Science 161). In 1905 Einstein was able to argue convincingly that in fact the speed of light is a universal constant.