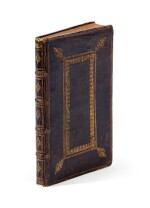 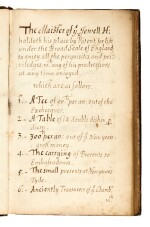 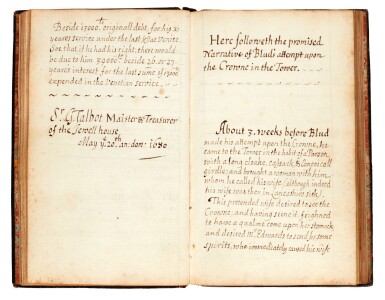 TALBOT | "Of the Jewell House", with "Blud''s attempt upon the Crowne in the Tower", manuscript, late 17th century

TALBOT | "Of the Jewell House", with "Blud''s attempt upon the Crowne in the Tower", manuscript, late 17th century

Of The Jewell House. With The Ancient Rights Belonging to The Maister and Treasurer Thereof [with] the promised Narrative of Blud's attempt upon The Crowne In The Tower.

Scribal manuscript in a single attractive hand, with corrections and revisions, in two parts, the first detailing the perquisites of the office with reference to Talbot's own biography, complaining of his ill-use and moneys owed to him, dated 20 May 1680 (30 pages), the second part on the Colonel Blood affair (32 pages), altogether 62 pages plus blanks, 12mo (152 x 95mm), contemporary panelled calf, spine gilt in compartments, edges gilt, marbled endpapers

[with:] George Younghusband, autograph letter signed, to Mrs Lowndes, returning the manuscript and discussing its importance, 4 pages, 8vo, Tower of London, 13 April 1919; loosely inserted in a copy of Younghusband, The Jewel House. 1921. 8vo, dust-jacket; housed together in a collector's folding box with manuscript

A DETAILED CONTEMPORARY MANUSCRIPT ACCOUNT OF COLONEL BLOOD'S AUDACIOUS ATTEMPT TO STEAL THE CROWN JEWELS. Blood, in the guise of a clergyman, tricked himself into the confidence of the Keeper of the Regalia, the elderly Talbot Edwards, then overpowered him and made off with the crown and other jewels. The alarm was raised before Blood had even escaped the Tower and he was caught almost immediately. Rather than facing trial, Charles II pardoned him and gave him a pension of £500. This narrative, which fulminates against such leniency, is by Edwards's superior, Gilbert Talbot, a loyal royalist who had been appointed Master of the Jewel House after new regalia was commissioned following the Restoration, and held the post until his death in 1691. This manuscript is one of a small number of scribal copies of Talbot's texts. Another manuscript containing both tracts, together with two others, is BL Harley 6859 ("signed at the end by the author"). Another copy of the Jewel House MS is held by The British Library (Add. MS 34359). The Blood narrative was published in Strype's edition of Stow's Survey of London (1720), pp.92-96, from a manuscript "which I had from the favour of Mr Edwards himself, the late Keeper of the Regalia".