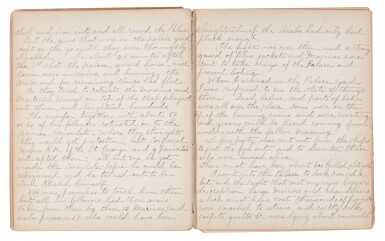 KING | Manuscript memoir of his military service in African wars, 1895-97

KING | Manuscript memoir of his military service in African wars, 1895-97

Manuscript memoir of his service in Africa as a Marine

providing a vivid first-hand account of several colonial wars, notably the Brass River expedition against King Koko including the taking of Sacrifice Island ("...well deserving of its name ... as we found human limbs &c hanging on the trees in every direction....") and the assault on the city of Nembe; skirmishes with Arab slave traders in East Africa; the looting of the sultan's palace during the Anglo-Zanzibar War of 1896; and the Benin Punitive Expedition of 1897; 76 pages, plus blanks, in a ruled exercise book, 4to, marbled boards, c.1897; loss at spine and upper cover detached

[with:] a manuscript volume of transcriptions of poetry by Kipling and other authors, c.50 pages, plus blanks, marbled boards, labelled "3" on upper cover, c.1914

Arthur Grey King (1871-1915) was a naval marine, who in this volume records his service on HMS St George, the flagship of the Cape and West African Station. He took part in a number of brief conflicts (the Anglo-Zanzibar War of 27 August 1896 is said to be the shortest in recorded history) characterised by barbaric violence on both sides. On the march to Benin City, for example, King describes attempts to scare the invaders by leaving the headless bodies of native carriers on the roadside, and others - said to be the victims of human sacrifice - disembowelled "with a live goat tied to them", whilst Benin City was the site of "hundreds of dead bodies, and skulls innumerable". The British response to such atrocities was to devastate entire communities, burn towns, and engage in wholesale looting (including, of course, the famed Benin Bronzes).