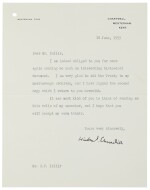 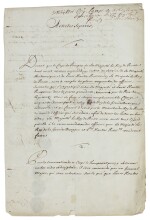 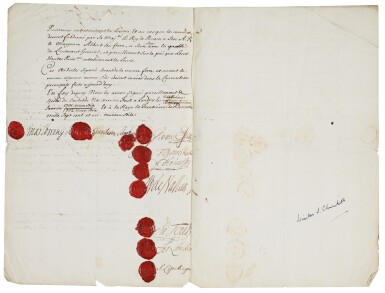 Articles of a military Treaty between Great Britain and Prussia,

at the time of the latter’s entry into the War of the Spanish Succession, relating to the command structure of the allied armies especially the deployment of officers under British command, in French, signed at the foot by the Duke of Marlborough and nine others, each with red wax seal impression, 2 pages, folio, January 1702, docketed at the head, additionally signed on the integral blank by Winston Churchill

[with:] four letters relating to Churchill’s signing of the document, May-June 1959, including: copy letter by R.F. Kallir, to Churchill, sending two copies of the signed treaty by Marlborough, one as a gift to Churchill and asking that the other be signed by Churchill and returned to Kallir, 6 May 1959; typed letter signed by Churchill, to Kallir (“...I am very glad to add the Treaty to my Marlborough archives, and I have signed the second copy which I return to you herewith...”), 1 page, Chartwell headed stationery, 10 June 1959

Rudolph Franz Kallir (1895-1987) was a Jewish refugee from Nazi Germany who fled to Britain and later settled in the US. He was a noted antiquarian who specialised in musical manuscripts. He not only built up an important collection but advised institutions including Harvard and the Library of Congress on musical acquisitions.