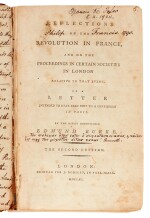 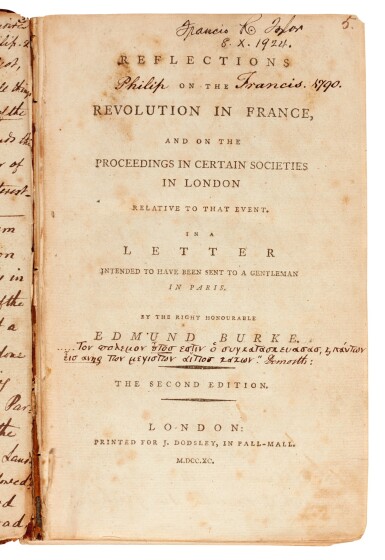 Reflections on the Revolution in France … the second edition. J. Dodsley, 1790

[bound with two other works:] La Constitution Français. Paris: de Baudouin, 1791; [Burke.] An Appeal from the New to the Old Whigs. J. Dodsley, 1791; 8vo, PHILIP FRANCIS’S COPIES WITH EXTENSIVE ANNOTATIONS IN INK TO SOME 35 PAGES, including endpapers and margins, comparing Revolutionary France to Cromwellian England (“…All violent popular revolutions seem to be attended with great Irreligion & Impiety…”), with observations on subjects including the nature of sovereignty and the meaning of equality, quoting such philosophers as Cesare Beccaria and Jean-Louis de Lolme, also with additional marginalia in pencil and a few corrections in ink, half blue morocco on marbled boards, extensive loss at spine, covers loose, text-block split

AN IMPORTANT ANNOTATED COPY OF BURKE'S GREAT WORK. Sir Philip Francis (1740-1818), best remembered as the probable author of the Junius letters, had been a friend and political ally of fellow Irishman Edmund Burke but they split apart when Burke wrote his denunciation of the French revolution. Burke showed his manuscript to Francis, who remained loyal to the radical Whig tradition and disdained Burke's sympathetic view of the ancien regime, and they exchanged heated letters on the book's publication. This extensively annotated book reveals Francis's continued engagement with Burke on the great political questions of the day.

Philip Francis, ownership inscriptions, (including to the second item "bought by me at Rouen in the August of the year 1792"); catalogue slip dated by hand 31 October 1916; Lawrences of Crewkerne, 10 October 1996, lot 611