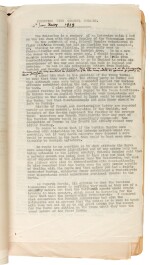 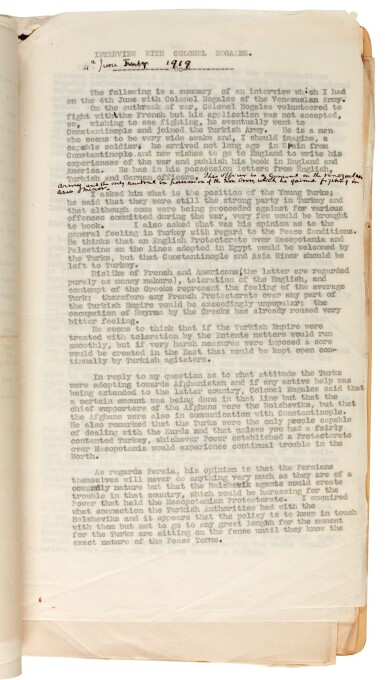 Eight files containing correspondence, memoranda, and reports, some labelled "Confidential" or "Secret", mostly typescript (many carbon copies) but some manuscript material, subjects including German espionage and propaganda, intelligence on the collapse of the Central Powers in the second half of 1918, the threat of Communism in Spain and the Spanish government's response to the end of the war, the German spy and anti-Communist agitator Manuel Bravo Portillo, record of an "Interview with Colonel [Rafael de] Nogales [Mendez]", a list of persons of interest to British intelligence (9 pages), post-war memoranda on the army in Spanish Morocco, extensive correspondence and memoranda on British industrial interests and the sale of armaments to Spain, and two copies of a Report on the Spanish Army (one with a few manuscript corrections, each 129 pages, 1919), correspondence relating to Badger's appointment, his frustration at the activities of the Ambassador, and his recall, chiefly 1918-19; also a file of personal correspondence including Christmas cards, postcard and an autograph letter signed, by King Alfonso XIII of Spain (the last on the death of his mother, 1929), cards by Jacobo, 17th Duke of Alba ("J"), and photographic postcards, c.19 items, 1912-41; also a commemorative album of Moratalla Polo Week, March 1914; all housed in Badger's attaché case stamped with the royal monogram of George V

PERSONALLY RETAINED FILES REVEALING BRITISH VIEWS ON SPAIN AT THE END OF WORLD WAR I. Reggie Badger (1882-1957), OBE, was a career soldier who had made the acquaintance of the young Spanish king and other members of high society at polo matches before the outbreak of war. He was appointed military attaché to Spain on 4 April 1918, probably as a result of these social connections, but was recalled as a result of ill health in July 1919.