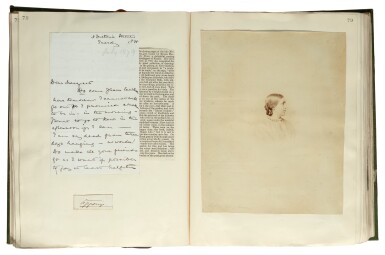 A substantial collection of autograph letters signed, signatures, and photographs, comprising in excess of 1500 items

[with:] an Index volume listing contents of all three albums together with the autograph album of Sir Richard Temple (see previous lot); nicks and tears, some items loose in the albums

This rich and varied collection, which includes significant highlights from a document signed by the father of London insurance to a letter by Millais referring to 'Ophelia', his most famous painting, was largely assembled by Captain Peter Johnston-Saint, who worked for many years as an agent collecting on behalf of Sir Henry Wellcome.

Please note that this lot includes letters by bishops from the 18th century on, not the 16th century as stated in the printed catalogue.