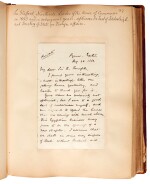 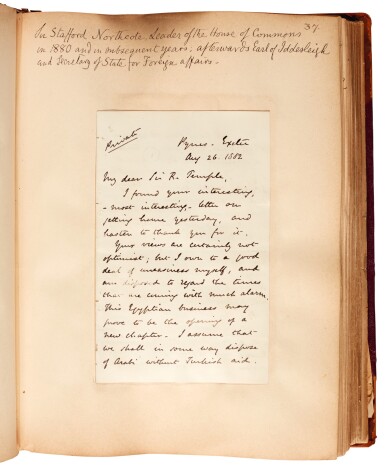 "Crown" (letters by courtiers); "Church" including Archbishop Benson (2); "State", including Salisbury on policy in Egypt ("...The highway to our Indian Empire is at stake...", 4 pages, 28 June 1882), Sir Stafford Northcote on the same subject ("...I assume that we shall in some way dispose of Arabi without Turkish aid...", 26 August 1882), Lord Randolph Churchill (2, "...I cannot admit that I am in favour of female suffrage...", 17 April 1884), Curzon, Charles Beresford, Joseph Chamberlain, Rosebery, Asquith, Edward Grey, and T.H. Ismay; "Diplomacy"; "War", including Lord Roberts (2, one discussing "the closing of the Jama Masjid, the great mosque in Delhi", 11 January 1895), Sir Geroge White of Ladysmith, and Kitchener; "Law"; "Science", including Joseph Lister, John Lubbock (2); "Philanphropy"; "Literature", including Walter Besant (2), Alfred Austin, 'Ouida', and Marie Corelli; "Art", including Leighton, George du Maurier, and Alma Tadema; "Drama"; "Colonies", including George Taubman Goldie and Charles Tupper; all mounted in an album with captions, 196 numbered pages, folio, half leather labelled ("Autographs | Volume I"), some browning to album and adhesive staining to some items, a few items loose, spine splitting and worn

Sir Richard Temple (1826-1902) was an administrator in India who rose to be Governor of Bombay before returning to Britain in 1880, becoming a Tory politician and author. Given his long experience in India it is natural that many of these letters discuss Eastern affairs, especially the 1882 war that established British influence over Egypt.