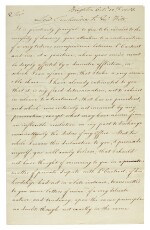 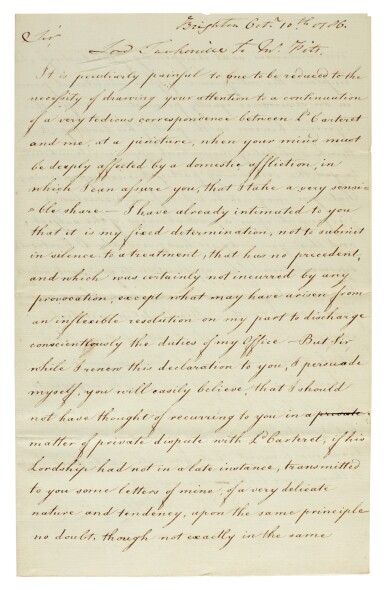 4th EARL OF TANKERVILLE | Correspondence on corruption in the Post Office, 1786, and other family papers

4th EARL OF TANKERVILLE | Correspondence on corruption in the Post Office, 1786, and other family papers

Correspondence relating to corruption in the Post Office and other family papers, comprising:

i) a bundle of c.40 letters relating to the 4th Earl of Tankerville's accusations of Lord Carteret's complicity in "a notorious system of corrupt management and influence which are grown inveterate in the Post office", ultimately resulting in Tankerville's forced resignation at Postmaster General, including letters by Pitt, Carteret (5), the 1st Earl of Clarendon (5), and the postal reformer John Palmer, with copies of further letters and retained draft letters by Tankerville, June-December 1786

ii) Charles, 3rd Earl of Tankerville (1716-67), bundle of c.22 letters to him, including one by the 4th Earl of Sandwich, on an ambassadorial appointment (1765), otherwise chiefly Chillingham estate correspondence, 1760s

iii) Henry Bennett, brother of the 4th Earl, commission as Captain in the First Regiment of Foot, signed by George III (1791); a third person letter by the Duke of Gloucester relating to "the dismissal of Major General Bennett from his family"; and a series of copy letters by various parties concerning this dismissal, 1798-99

Charles, 4th Earl of Tankerville (1743-1822) was joint Postmaster General with Henry, Lord Carteret, until they fell out over claims of illicit payments. Tankerville's intemperate attacks on other members of the administration made his resignation inevitable, but the subsequent public enquiry eventually led to attempts to tackle endemic corruption in the post office.