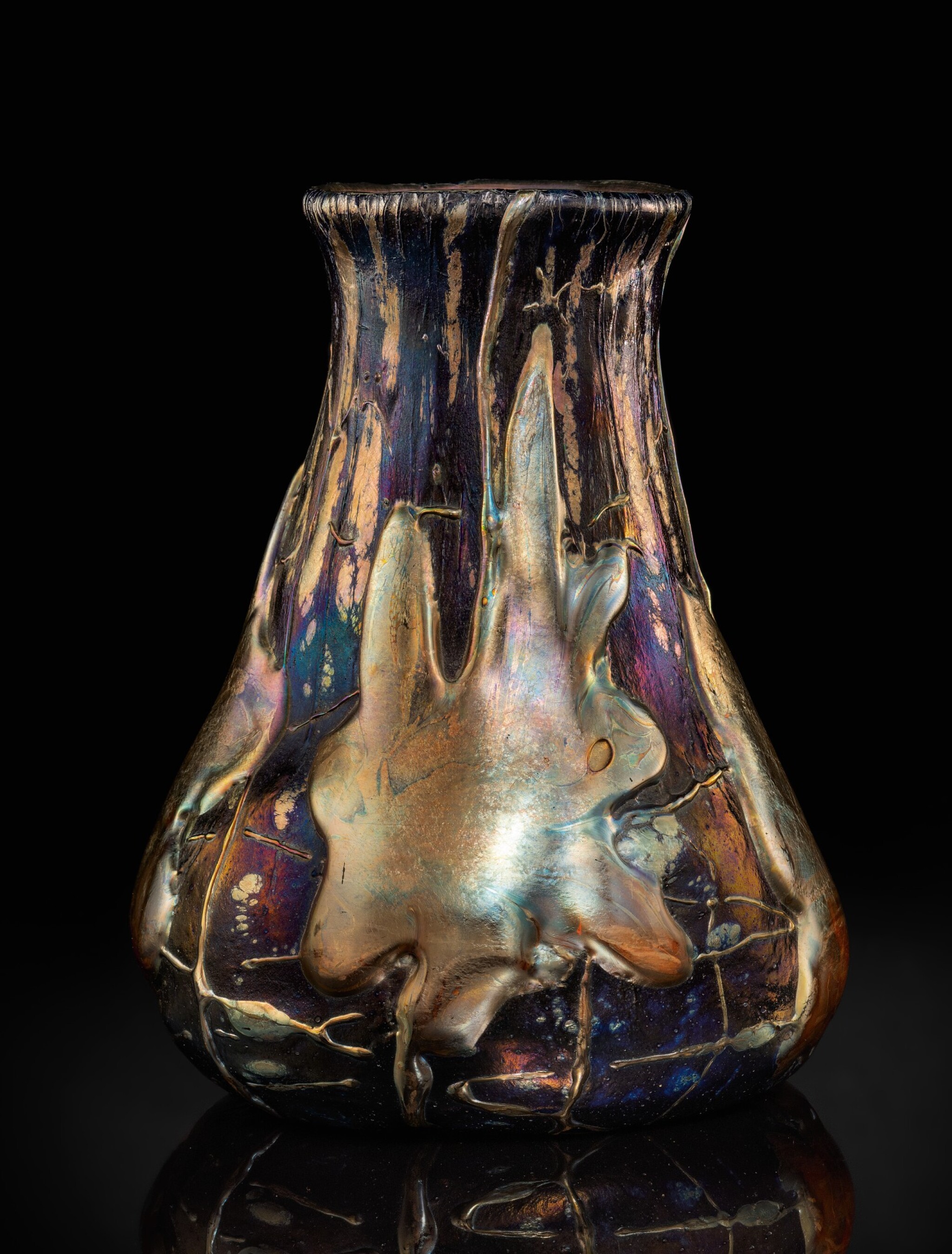 "LAVA" VASE FROM THE ALASKA-YUKON-PACIFIC EXPOSITION

Overall in very good condition. When viewed firsthand, this impressively-scaled vase displays superb visual impact and sculptural presence. The vase presents with a rich ground of indigo and navy with masterfully applied "flowers" or "leaves" of golden-lavender lava decoration. The exterior is brilliantly iridized displaying vivid tones of turquoise, seafoam green, and magenta. The favrile glass surface with some scattered extremely fine surface scratches consistent with age and gentle handling. The glass with scattered air bubbles and surface irregularities throughout, which appear to be inherent in the Lava technique and intentional to promote the naturalism of the design. There is a small linear irregularity on the right edge of one of the lava flowers on the interior of the vase that appears to be inherent in the making or annealing process. Two of the applied leaves with vertical annealing cracks inherent in the making. The interior of the vase with some traces of light surface soiling and calcification. The superlative quality of this vase is underscored by its inclusion in the Alaska-Yukon-Pacific Exposition in 1909, as indicated by the inscription to its underbase.

There is a legend that Louis Tiffany was inspired to create "Lava" vases after visiting Sicily and seeing Mount Etna erupt. This story is most likely apocryphal as none of the volcano’s eruptions coincide with any of his many trips to Europe. It is far more likely that Tiffany was influenced by 17th Century Japanese raku-fired ceramic tea bowls. He was an avid collector of Japanese objects, and it is no surprise that some of the earliest pieces of blown Favrile glass were compared to “those freakish little things made nowadays in Japan of a rough-textured, strong pottery…that strike one far more as grotesque than beautiful.”

Lava vases are intriguing as they were perhaps the only type of blown Favrile glass that required an extended period of development until the glassmakers were able to perfect the style and achieve the necessary technical skills to produce them. Unlike flower forms and paperweight-technique vases that took the glasshouse only a year or two to perfect, Lavas evolved over a ten to twelve-year period. Considering the length of time required to achieve the desired decorative effect, it is surprising that Lava vases, featuring heavy irregular iridescent gold drippings over a textured dark navy ground, were produced by Tiffany Furnaces for only two brief periods: circa 1906-1907 (the first known example was displayed at the 1906 Paris Salon) and again around 1916.

The exceptional piece offered here is similar to two known Lava vases, one in the permanent collection of the Chrysler Museum of Art (Norfolk, VA), numbered 2584C, and the other last being offered in these salesrooms on December 13, 2017 (lot 227) and inscribed 4056C. The shape and decoration of this piece, however, is superior to both of those examples. The slightly balustered body, of transparent yellow glass, has an irregular textured navy overlay. This is beautifully contrasted by the irregular applied drippings and trailings, as well as the openings to the overlay, that received a bright gold iridescence. The iridescent gold “flowers” are also highly unusual and visually striking. Normally comprised of the same transparent yellow glass as the body, these applied sections have subtle translucent internal swirls that adds to the three-dimensionality of the flowers.

It is significant that this vase was selected to be exhibited at the 1909 Alaska-Yukon-Pacific Exposition held in Seattle, Washington. Tiffany’s exhibition was valued at $75,000 at the time, the equivalent of over $2 million today, and was intended to visibly demonstrate to the world why Favrile “glass is regarded as the highest development of the glassblowers’ art, excelling in richness of coloring.”1 This vase, truly worthy of being seen and admired by the exposition’s international audience, clearly reflects the incredible mastery the glassworkers worked so tirelessly to achieve. Lava vases perhaps best typify the experimental decorative “accidents” Tiffany inspired, and expected, his men to attempt. Vases such as this one convincingly support Louis Tiffany’s claim that his blown glass objects were unique and beautiful works of art, equal to any painting or sculpture.