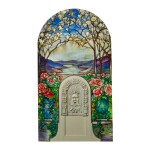 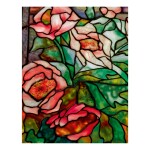 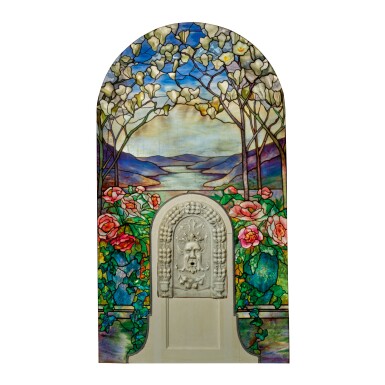 Overall very good condition. When viewed in person, the window has incredible visual presence. Its impressive scale, artistic glass selection and dynamic perspective impart the window with a spacious, airy quality, that is grounded by the pots of lush peony blossoms in the foreground and central marble fountain. The window is executed with a diverse selection of mottled, striated, and drapery glass (used for the magnolia blossoms), and select tiles have been enhanced with acid-etching and silver-stain to add further dimensionality and atmosphere. The window is selectively plated (layered with glass) on the reverse up to three layers of glass to heighten the visual depth of the landscape composition. The window with 20-25 scattered hairline cracks throughout the first layer of glass. All of the hairlines throughout appear stable. The window with some light surface soiling to the adjacent contours of the leading. The original wood frame is in good condition and has been repainted at some point in the history of the piece. The interior of the wood frame has been lined around the perimeter with aluminum foil by the previous owner in order to reflect the light; the foil can be easily removed. The central marble fountain is inset within the original wood panel and would benefit from stabilization within its setting in a more permanent manner. The marble carving in very good condition with fine and crisp detailing, some light surface soiling to the recessed areas of the design, and some scattered minor discolorations. The bottom left corner of the marble panel with a chip measuring approximately 2 x 1 inch. The edges of the marble with some expected minor chips consistent with age and handling. The bottom right corner with a small chip on the lower horizontal and vertical edges, each measuring approximately 1 inch. An exceptional window design displaying a stunning composition and highly artistic glass selection. The window presents beautifully in person and the central fountain is well integrated within the overall composition and subject.

Mr. and Mrs. Christian and Marie Feigenspan, Newark, circa 1905

Red Cross, by acquisition of the Feigenspan Mansion, circa 1977

Acquired from the above by the present owner, circa late 1970s

In 1905, architect Warrington G. Lawrence (1861-1938) built a thirty-seven room mansion on High Street in Newark, New Jersey, for the city’s premier brewer, Christian Feigenspan (1876-1939) and his mother, Marie Louise. (Feigenspan Brewery, one of the world’s largest at the time, produced a draft called “Pride of Newark,” affectionately known as PON beer.) Feigenspan commissioned Lawrence to create his three-story brownstone house in Second Renaissance Revival style in a neighborhood of newly prosperous, mostly German immigrants, around the corner from the home of John Ballantine, another brewer. (Ballantine’s house is now part of the Newark Museum and home of a window designed by painter Elihu Vedder for Tiffany Studios). Marie Feigenspan was confined to a wheel-chair, and the house, which still stands, is noted for its accommodation of her handicap. It was a declared a National Landmark in 1977, when it served as the headquarters for the American Red Cross in New Jersey. This stunning Tiffany window was a principal feature of the residence.

Lawrence, best known at the time for his pivotal role as chief draftsman and right-hand man for Richard Morris Hunt during the building of George W. Vanderbilt’s massive estate, Biltmore, in 1894-1895 in Asheville, North Carolina, was in great demand as a designer of homes for the wealthy in New Jersey in such affluent towns as Elberon, Red Bank, and Rumson. He studied at MIT, and also worked with McKim, Mead & White. Although it is not known whether he had a relationship with Tiffany Studios, he undoubtedly would have been familiar with their work as a New York City-based architect and through his connections with Hunt and McKim, Mead & White, both of whose offices worked with the decorating company.

The unusual window, which surrounds a marble fountain, was originally located in the conservatory on the first floor at the back of the house (sometimes called the sun room or the palm room). The fountain is integral to the window’s design and may have been supplied by Tiffany Studios. In the overall composition, a fictive wall with a low parapet extends behind it, executed in limestone-colored glass to match the marble, as if the fountain and wall are one.

Two large vases rest on the parapet, holding a riot of large pink and salmon peonies. Striated and streaky glass represents the petals. Confetti glass forms the myriad stamens at the centers of the flowers. Peony leaves are created in both mottled glass and by acid-etching, which gives them a dimensional quality. Ivy fashioned with mottled glass spills down the front of the vases and over the edge of the parapet. Roundness and fullness of the vases is suggested by the careful selection and treatment of the spectacular teal, cobalt, and violet-colored glass.

Above and behind the wall stretches a sylvan landscape framed by magnolia trees in bloom. The petals are modeled in creamy white drapery glass with a silken surface, with touches of brilliant yellow silver stain to depict stamens. Tiffany often presented magnolias this way, starting as early as the mid-1880s when he created a window for his own home on 72nd Street in Manhattan that he later moved to Laurelton Hall, his estate on Long Island. (The window is now in the Charles Hosmer Morse Museum in Winter Park, Florida.) Beyond the trees is a distant vista of blue and lavender mountains framing a lake. Acid-etching on several layers of glass produces the effects of cloud shadows on the land. Mottled blue glass fades to wispy white-and-clear glass, evoking cirrus clouds in a peaceful sky. Faint rays of light at the edges of the magnolias that ring the sky suggest that the sun has only just set, or is about to appear above the horizon. The surface of the water captures the glow of the sky as it does at the end of the day, or just before dawn, drawing light into its depths.