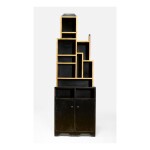 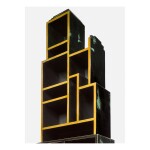 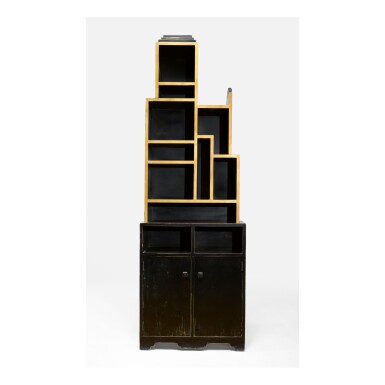 Overall in good condition. The surfaces present with scattered scuffs, scratches, rubbing, fading, instances of spotting and residue, and some wear, cracking, and losses to the lacquer throughout, all consistent with age and use. The outer and inner sides were originally painted with green lacquer and later painted over with black lacquer at some point in the piece’s history. This black lacquer with scattered areas of wear throughout that at times reveals the original green lacquer, these areas are concentrated mainly to the left and right sides, and in other instances reveals the original wood beneath both layers, these instances mainly located to the edges of the cabinet. The proper left and right sides respectively with about five and three more prominently isolated instances of the revealed original green lacquer, the largest on the left side measuring approximately 6 ½ x 2 ½ inches and the largest on the right side measuring approximately 7 ½ x 1 ½ inch. The bottom of the cabinet doors and of the proper left side with streaks of wear revealing the green lacquer and original wood radiating from the base. Some of the instances where the original wood surface is revealed with additionally later added black ink or paint, visible on close inspection, particularly to the aforementioned areas of radiating streaks. The gold paint to the front edges and cap are very likely original and present with some runs, fading and discoloration, and instances of wear and loss throughout, consistent with age and use. The cabinet knobs are loose and rotate on their hardware but are stable. The interior of the cabinets present entirely with the original green lacquer and with some surface soiling throughout. The lacquered surfaces would likely benefit from conservation. One corner of the proper right side of the middle shelving unit with a dent measuring approximately 7/8 x ¾ in., stable. The rear proper right corner of the topmost tier of the cap also with a dent measuring approximately 3/8 x 1 ¼ in. The rearmost corner of the proper left side of the middle shelving unit with a small dent measuring approximately ½ x ¼ in. An extraordinary early example of this geometric form emblematic of American Modernism that marks a transitional period early in Frankl’s artistic career.

Acquired from the above by the present owner, circa 1995

Paul T. Frankl designed his first Skyscraper bookcase in the summer of 1925, while staying at his cabin in Woodstock, New York. It took him until the following year, however, to begin to develop what would become his characteristic style: tall, slender “towers” frequently set on broader bases, with sundry compartments and doors, and surmounted by stair-stepped caps. This piece is a very rare example of his early Skyscraper aesthetic. It almost certainly dates from 1926, his first full year of production. Frankl would continue to make Skyscraper bookcases, along with desks, chairs, and other furnishings until the end of the decade. Throughout this period, he experimented with different versions of his basic concept, often altering their dimensions, forms, and detailing. What is especially notable in this design is the ziggurat-like detail at the top of its right-hand side. He tried out this same form on some of his other furnishings from this time, especially chairs and tables, usually as details on the underside, in the guise of aprons. Here it is echoed in the detail of the feet, a feature that one can also find in some of his other Skyscraper bookcases. But its application to the upper portion of this piece—and positioned upward—was perhaps a one-off for him, or, at the very least, limited only to a few examples.

It is possible that this was a custom design—Frankl had only a small number of pieces on display in his gallery at 4 East 48th Street, in Manhattan—and he not infrequently made specific designs for his clients, according to their wishes and needs. These designs he then had made by different cabinetmakers—he had no production facilities of his own—and the quality thus varied somewhat, depending on the maker, and, also, the client’s budget. The relatively crude joinery, hinges, and pulls on this piece, and its decreased dimensions suggest that it was not only early but also for a client of more moderate means and with a smallish apartment. The very largest, most elaborate pieces, accordingly, went to clients with large rooms and very high ceilings.

Frankl’s Skyscraper bookcases from this period did not have metal labels; he only began affixing them later, probably in the second half of 1927, after myriad “copies” began appearing in the marketplace. Before this time, he sometimes employed paper labels, but the very earliest pieces, like this one, are almost always without labels.

Like the great majority of Frankl’s Skyscraper pieces, this one is lacquered. He often specified inexpensive woods to increase his profit margin and painted then to conceal the fact. The underlying green lacquer in this case is the earliest surface; the traces of gold paint on the front edges and cap are very likely also original but atypical for Frankl. He habitually specified silver gilt for his Skyscraper pieces, and the use of gold in this case once more highlights the uncommon qualities of the design.

Taken together, these features are evidence that this piece was a transitional design for Frankl, and made quite early. They highlight the extent to which he was still investigating the possibilities of the form in 1926. It was only later, in 1927, that he would develop his signature look.

University of Texas at Austin