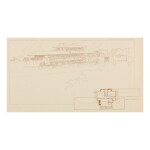 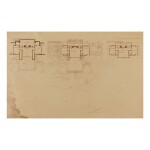 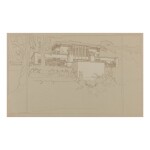 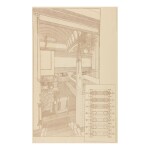 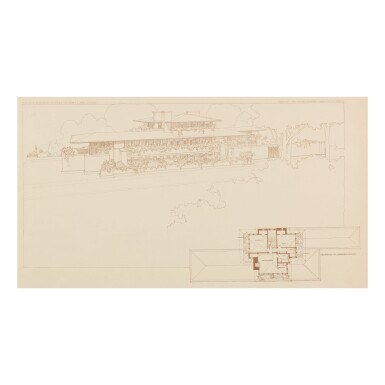 72 plates on cream and gray paper, 28 plates on brown tissue

each plate with title and artist's embossed blindstamp

Overall in good condition. Original portfolio covers present, and show some minor damp staining splitting at spine, and some loose threads, consistent with age and use. Covers retain their original ribbons, with some ribbons missing, and ribbons display wear, consistent with the natural aging process of the material over time. Plates display some browning, slight folding, chipping, and minor tears, concentrated to the margins and not affecting the images. Many images retain original tissue covers. A fine and complete example of Wright’s famed portfolio.

In October 1909, Frank Lloyd Wright left his life and family behind in Oak Park, Illinois and set sail across the Atlantic with his lover, Mamah Borthwick. Their scandalous flight to Europe was sensationalized in the media (she was the wife of one of Wright’s clients, Edwin Cheney), and so the couple eventually settled in Fiesole, a small village outside of Florence, Italy, where they would be sheltered from the public eye. There, with the assistance of two draftsmen, Wright compiled Ausgeführte Bauten und Entwürfe von Frank Lloyd Wright (“Studies and Executed Buildings of Frank Lloyd Wright”), an oversized, two-volume portfolio comprised of 100 lithographs of the architect’s most celebrated buildings, both executed and unrealized. Once complete, it would come to be considered one of the most important and influential architectural publications of the century and, at the age of 44, would further augment Wright’s reputation as one of the leading modern architects internationally.

The project was a massive undertaking, requiring existing plans, elevations, and presentation drawings be retraced with quill and ink into a standardized format for publication. The drawings were then printed by Ernst Wasmuth Verlag, Wright’s publisher in Berlin, on the largest lithographic stones they had. A wide variety of Wright’s buildings were represented—public and private, urban and rural—demonstrating the incredible depth and breadth of his ingenuity. Many of Wright’s most seminal works are represented, such as the Frederic Robie House, Susan Lawrence Dana House, Ward Willets House, Darwin Martin House, Avery Coonley House, the Larkin Building, and Unity Temple.

To accompany the plates, Wright authored an introduction that was printed both in English and German. His writing was the product of months of contemplation over the project, which lasted even longer than the process of compiling the portfolio itself. In it he appraised his own work, commented on education, historicism, and the importance of organic architecture. The essay was so dense and poetic, in fact, that Wasmuth had great difficulty translating it into German. Its inclusion with the portfolio underscores Wright’s regard for Ausgeführte Bauten und Entwürfe von Frank Lloyd Wright as his magnum opus.