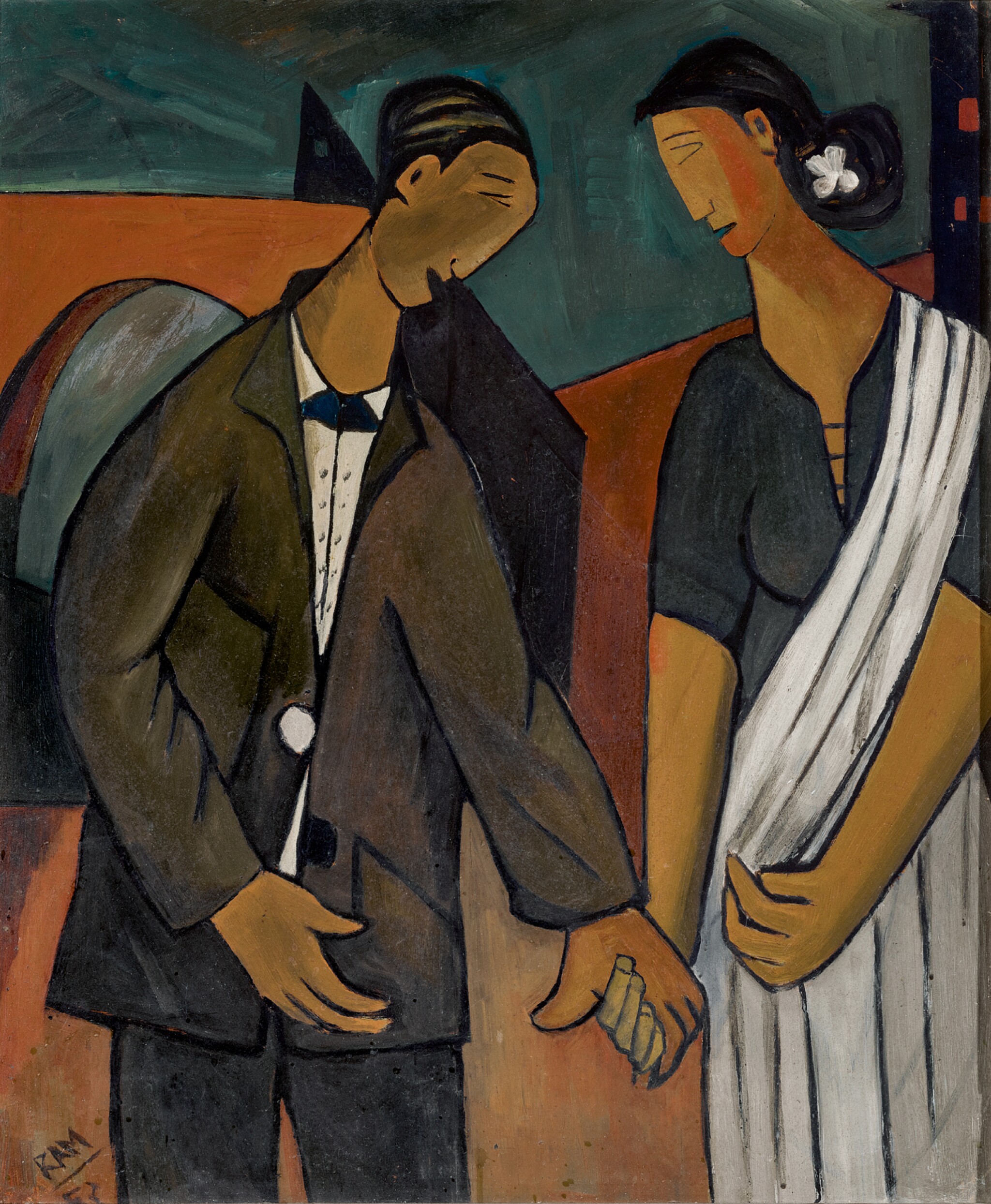 Acquired directly from the artist, New Delhi, circa 1985-6

Ram Kumar developed a friendship with Guy and Helen Barbier, eventually sending his son Utpal to stay with the Barbiers in Switzerland for a few months. This painting was meant to be a gift from Ram Kumar to his wife but because of the Barbiers' hospitality and generosity, Ram Kumar sold them this painting which was hanging on the wall of his home.

The Art of Ram Kumar: Between the Pen and the Brush

“I think, perhaps every artist starts with the figurative, because when we go to an art school, there is a model there, and we have to do drawings, learning anatomy…, and so perhaps [it is] a very natural thing, along with landscape, at least for me. The reason I made those sort of paintings, was that I was a bit inspired by the left politics at that time, there was an inclination towards the tragic side of life… It started here, becoming more mature in Paris. And even if I had not been inspired by politics, perhaps I would have made the same kind of paintings, because that is part of my nature… some sort of sadness, misery of whatever it is. Also in my short stories, it is always towards people who have suffered…". (R. Kumar in interview with N. Tuli, ‘Ram Kumar’, The Flamed Mosaic, Indian Contemporary Painting, Mapin Publishing Pvt. Ltd., Ahmedabad, p. 364)

Ram Kumar first came to prominence as a short story writer before a painter. In 1943, while studying at the St. Stephen’s College in Delhi, Kumar chanced upon an advertisement of the Sarada Ukil School of Art and on an impulse, decided to enrol there. On being asked why he ventured towards painting, he cited both creative and financial reasons, “… somehow I was fascinated by this new world of colours in a sort of romantic way. I never thought that I would become a professional painter. But in no time I realised that it was a medium eminently suited to me… In those days one could sell a painting for ₹300 whereas it was difficult to get even ₹25 for a short story.” (R. Kumar quoted in 'An Accidental Painter', The Hindu, 20 April 2018, https://www.thehindu.com/books/books-authors/an-accidental-painter/article23604681.ece)

Ram Kumar pursued painting and writing simultaneously for several decades and his early works of the 50s are amongst the finest examples where he oscillates between the two. This time was also marked by his return from Paris where he lived from 1949 - 1952. As a writer he remains focused on social concerns whilst as a painter he expressed a more personal vision of the world. Nonetheless, the two art forms continued to share certain common characteristics and in the current example his concerns of both art forms once again coincide. Untitled (Man and Woman Holding Hands) was painted in 1953, a momentous year for Kumar as he also penned down his first fictional work, Ghar Bane Ghar Toote, which dealt with the struggle of the educated unemployed, in the refugee colony in the Karol Bagh area of Delhi.

On his return, Ram Kumar’s years in Delhi were spent observing and drawing the people around him. His works from this period not only reflect his disillusionment with the monotony and anonymity of urban existence but are also part of a larger commentary on the unrealised promises of Independence, which had held hope for a better life for millions of Indians but failed to deliver for most. As he had just returned from Europe, one could draw direct parallels with post-war Europe. '[...] in Ram Kumar's paintings of the 1950s one recognized the dramatis personae as city people in a city environment circumscribed by the constrictions of urban society and motivated by conflicts which ensue from dense population, unemployment, and artificial relationships [...] Somewhat marionette-like and angularly stanced with half-gestures that seem to clutch at something precious, the boldly but starkly portrayed people [...are...] related to one another because of the pervading quality of introspection, of a searching for meaning, purpose, release which is written large on their countenances.' (R. Bartholomew, 'Attitudes to the Social Condition: Notes on Ram Kumar', Lalit Kala Contemporary 24-25, New Delhi, 1981, p. 31)

The current lot is a wonderfully elegant and poignant composition that powerfully synthesises all the characteristic traits that Ram Kumar developed in these early works. We see the recognisable characters; distinctive, emotive facial features; costume elements – the man garbed in a suit while the woman in what appears to be a sari but could also be a western blouse with a stole; urban and landscape backdrops all rendered in a muted earth-tone colour palette. There is a preciousness to their pose – leaning bodies with down turned faces, kind eyes, perhaps a hint of a smile and à l’artiste haircuts – all of this tempered by the precision of the colours: the black of the jacket and the blouse, the pallor of their skins, further emphasized by the white of his shirt and her sari/stole and the flower in her hair bun.

There are two distinct components here – the two figures who dominate the composition leaning heavily on each other and the urban landscape divided into angular flat planes of colour. Kumar has thoughtfully linked the figures to the landscape with his use of angles and colours, further heightening the sense of desolation. Classic of other examples from this period, the figures occupy the entire space of the painting and are not specific individuals but rather they represent the state of human condition. Speaking of Ram Kumar's 50s works, Bartholomew has stated, ‘In the paintings of that period we see Ram Kumar’s theatre sense growing. The décor became abstract, convoluted, and the locale symbolic. The faces were more eloquent, the stances more intimate and tender. There was passion and there was prayer, and though sorrow was a large theme, hope was not entirely absent.” (R. Bartholomew, ‘The Early Years,’ Ram Kumar: A Journey Within, Vadehra Publishing, New Delhi, 1996, p. 43)

Over the course of his career, Ram Kumar bore witness to a number of pivotal movements in art history, which were to have a profound effect on his painting. In this work, the artist seems to draw inspiration from Amedeo Modigliani -- the geometric simplification of the human form, the S-shaped curve of the body inscribed by a flowing melodic line, the elongated neck and face with almond, vacant eyes that render the sitters with an enigmatic and impenetrable mood, and the stylised, accentuated line of the nose and the pursed, small mouths. Modigliani also painted common men and women. Both artists utilised a soft tone, gracefully captured in hushed colours. The background emanates a geometric abstraction, the individual elements are demarcated by both colour and spatial planes, revealing the influence of the artist’s training under André Lhote and Fernand Léger. The individual elements of the composition are analysed, re-ordered from multiple perspectives and synthesised into a composite structure.

This work is of immense historical significance as it exemplifies the best of Ram Kumar, created in a hallmark year for him both as an artist and a writer. 'There is a visionary link between his paintings and his stories. Both are characterized by an asceticism of form. If there are no extravagant lines in his drawings, there are no melodramatic gestures in his stories. The melancholic stillness that settles over his city landscape is analogous to the arid silence that separates the characters he creates. The severe beauty of colours in his sketchbooks finds its equivalent in the sad cadence of sentence in his writing. His landscapes are remote, alien, threatening; his stories are sad, troubled and brooding.' (Alok Bhalla, Introductory Essay, The Sea and Other Stories by Ram Kumar, Shimla, 1997, p. ix)