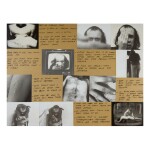 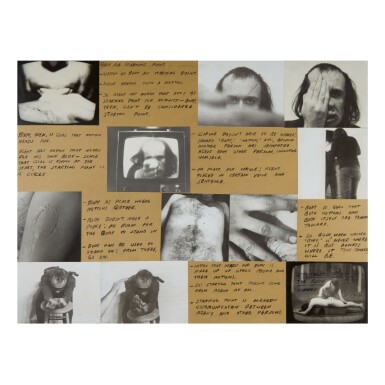 VITO ACCONCI | 'NOTE-SHEET FOR POINT OF THE BODY'

VITO ACCONCI | 'NOTE-SHEET FOR POINT OF THE BODY'

'NOTE-SHEET FOR POINT OF THE BODY'

a unique object, a collage comprised of 11 gelatin silver prints, mounted together to cardboard, signed, titled, and dated in ink on the lower right photograph and extensively captioned in grease pencil on the mount, framed, 1971 (Vito Acconci, pp. 111 and 113)

This unique collage is in overall very good condition. As is expected with Acconci's hand-constructed 'notesheets,' there is soiling, scattered adhesive remnants, smudged text and worn edges, with small losses to the photographs. The tonalities range from prints that exhibit very low contrast to those with saturated, inky blacks. When viewed under raking light, the print surfaces appear mottled and somewhat metallic, and there are several shiny scuffs, possibly glass off-setting. Several prints are unevenly yellowed, particularly the image at the center-right.

The reverse of the mount is soiled and there are adhesive remains and abrasions along each edge.

Vito Acconci’s unique photo/text panels complement the artist’s film, sound, and video recordings documenting his intense performances, videotaped actions, installations, and interventions that explore the self in space. These artworks not only provide didactic explanation of a performance, but also further expand Acconci’s practice. In Vito Acconci: Writings, Works, Projects, Gloria Moure classifies several performances from 1969-71 under the heading ‘Bodies I: The Body in Space.’ These body-conscious works often feature Acconci nude as he performs actions that cause physical harm or discomfort to himself, undertakes strenuous exercises, or warps and bends his own body. A graduate of the Iowa Writers Workshop, Acconci also suffused his performative artwork with textual instructions that read like poetry: ‘Body as place where notions gather. / Body doesn’t need a place: no room for the body to stand in. / Body can be used to stand on: from there, go on.’

This 1971 ‘note-sheet’ includes images from Acconci’s actions during the period. The print of a bite-mark is from the photographed activity Trademarks (September 1970). Acconci’s instructions for the piece read: ‘Sitting naked on the floor, and biting myself: Biting as many parst [sic] of my body as my mouth can reach. Printers’ [sic] ink is applied to each bite; bite-prints are stamped, like finger-prints.’ Two photographs are from Passes (1971), a videotaped action wherein Acconci extends his arm forward, passing his hand up and down, back and forth, in front of his face. He gradually reduces the space between his hand and face, until his hand pushes into his skin.

Similar collaged works, such as Following Piece (1969) and Notes on Movement (1972), are both in the collection of The Museum of Modern Art, New York. Both are arranged in similar configurations to the present work, with gelatin silver prints mounted to heavy board and black ink inscriptions.