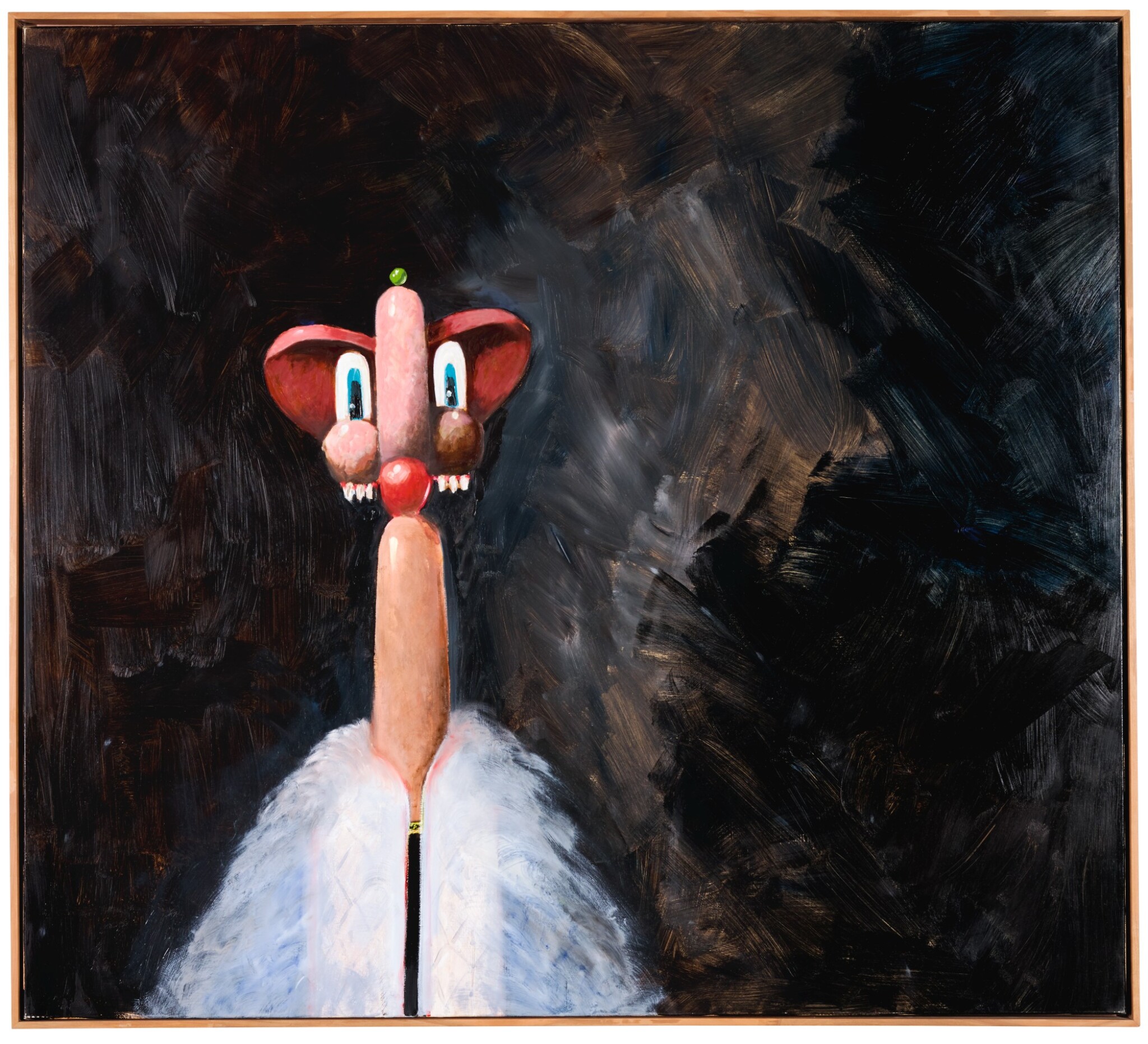 “Its about dismantling one reality and constructing another from the same parts, and that various concrete objects are not attached to their parts alone” George Condo in conversation with Ralph Rugoff, cited in: George Condo: Existential Portraits, New York 2006, p. 8.

At once endearing and monstrous, the meticulously rendered features of the cartoonish Butcher’s Wife perfectly encapsulate George Condo’s concept of Artificial Realism. Defined as the realistic representation of that which is artificial, the principals of Artificial Realism guide Condo’s construction of a motley crew of fictional characters whose imagined lives provide a fanciful recreation of our contemporary world. Condo’s inimitable figures serve as a mirror for human nature – their embellished features contorting into expressions of pain, anger, and loss which are at once sympathetic and revolting and encourage the viewer to wonder at their own contradictory nature. Rendered in hurried, expressive brushstrokes reminiscent of those of Impressionist master Claude Monet, Butcher’s Wife presents one such character, staring wide-eyed at the viewer. Her pupils are at different dilations, accentuating the varied size of her eyes and contributing to an overall mood of anxiety and stress emphasised by the moody grey of the background. Condo disclosed that: “I wanted to capture the characters of these paintings at the extreme height of whatever moment they’re on – in that static moment of chaos – and to picture them as abstract compositions that are set in destitute places and isolated rooms” (George Condo cited in: Exh. Cat., New York, Luhring Augustine, George Condo: Existential Portraits: Sculpture, Drawings and Paintings 2005/2006, 2006, p. 8). Condo is not just interested in representing the raw realities of the human psyche but the effect that viewing these representations has on the mental state of his audience.

Often referred to as portraits, Condo complicates such a straightforward classification noting that traditionally, portraiture aimed to capture the essential character of the individual through a faithful reproduction of the sitter’s likeness. The exaggerated and clownish features of Condo’s eclectic cast of characters so clearly evidenced in Butcher’s Wife seem to disguise their identity, while simultaneously revealing a compelling psychological presence. Nonetheless, Condo often uses the tropes of traditional portraiture, conducting a symphony of artistic references to Rembrandt, Caravaggio, and Picasso only to disrupt and subvert them. The Madonna, one of Condo’s first mature works which launched his career in the early 1980s, imitates the style of the Old Master’s will simultaneously distorting it. “I felt that my offering [to painting] would be an artificial, simulated American view of what European painting looks like” stated the artist. “I thought of this as being a realist, in a strange way…I think creating hybrids is a characteristic of American thinking” (George Condo cited in: Stacey Schmidt, ‘George Condo Meets George Washington’, in: Thomas Kellein, Ed., George Condo: One Hundred Women, Ostfildern-Ruit 2005, p. 11). It is important to note that this hybridity which characterises Condo’s works is not, in his mind, appropriation. Having worked in Andy Warhol’s legendary Factory for a brief period in the 1980s, Condo witnessed Warhol’s reinvention of familiar images and tropes to create new and original works. Condo took away other lessons from his time at the Factory including his seamless blending of high art techniques and kitsch aesthetics.

Condo’s amalgamation of older and more modern painting styles offers a sense of untimeliness which boldly contrasts with the populist work of contemporaries Keith Haring and Jean-Michel Basquiat. Like them, however, Condo work was engaged in a new kind of stylistically blended figurative painting. The resulting dynamic collection of ‘portraits’ both psychologically and aesthetically rich, of which Butcher’s Wife is an excellent example, have solidified Condo as a pioneer of contemporary art.