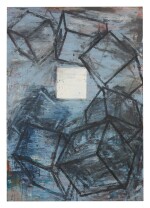 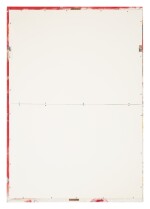 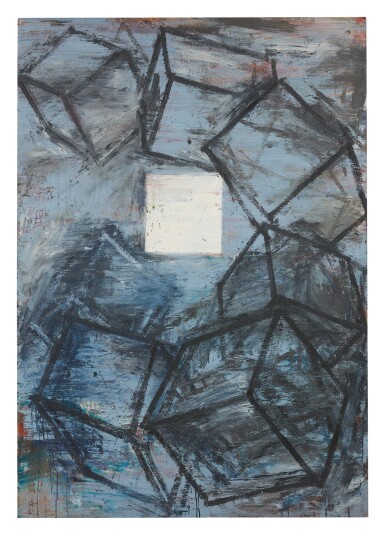 signed, titled and dated 1987 on the reverse

This work is in very good condition overall. There are textural shifts throughout due to the artist's working method. There is minor pigment separation to some of the black linear passages in the lower left quadrant, inherent to the artist's chosen media, visible upon close inspection. Under ultraviolet light, there is no evidence of restoration. Unframed.

Art of the second half of the twentieth century was just as revolutionary and bold as the times. In all cultural, social and political realms, there was a questioning of traditions, definitions and boundaries. Young artists departed from past techniques, genres and subjects, even beyond the radical developments and towering achievements of the Abstract Expressionists of the 1940s-1950s. By the 1960s, the drive for creative discovery led to the birth of Pop Art, Minimalism, Conceptual Art and Process Art. While the art of these disparate movements does not look the same, all of it addressed a pursuit of the power of the idea behind art, rather than the object produced. Warhol’s expansion of the Dadaist principles about form and content were just as conceptual as the art of Minimalism, and as Sol LeWitt succinctly declared, “Conceptual art became the liberating idea that gave art of the next 40 years its real impetus.” (the artist quoted in Saul Ostrow, “Sol LeWitt”, Bomb Magazine, Issue 85, Fall 2003, n.p.).

Few far-sighted collectors responded as passionately to the new Minimalist forms and ideas in the visual arts as this anonymous American private collector. Undaunted by challenging art, this collector embraced provocative works and formed one of the most insightful collections to emerge in the last 30 years. Non-representational art by American artists is at the core of the collection, the product of a unique and elegant eye, and an independent and contemplative spirit. As do many cutting-edge collections, it includes works acquired close to their date of execution and in-depth compilations of works that follow the arc of an artist’s career. Paintings and drawings were selected based on personal instinct and visceral pleasure, inspired by the desire to live with art and continue the dialogue between artist and viewer that was the goal of most contemporary artists. The love of collecting often grows with an appreciation of the role of art in a democratic and nurturing society, and this was a guiding principle for the private collector who formed this cohesive and thoughtful group of works. The collector supported major local museums through personal leadership, financial giving and donations of works of art. Having frequented museums to form aesthetic tastes and judgment, this collector was keenly aware of the importance of art museums to the local community.

This collection has a refined focus on color, line and shape, all hallmarks of Minimalism’s goal to redefine the basic elements of art. Ellsworth Kelly’s powerfully graphic 1958 White Black (Petit Dolmen), sold from the collection at Sotheby’s this past May, distilled visual experience down to the purest sense of form, light and space. Kelly’s oeuvre was central to this collection, as was the work of Sol LeWitt, whose famous quote serves as a touchstone: “I want to emphasize the primacy of the idea in making art” (the artist quoted in Saul Ostrow, “Sol LeWitt”, Bomb Magazine, Issue 85, Fall 2003, n.p.). The influence of Kelly and LeWitt highlights this collection’s emphasis on the intuitive nature of Conceptual Art, not just the mathematical and intellectual elements. At one time, the collection also included works by Carl Andre, Donald Judd, Jasper Johns, Brice Marden, Bruce Nauman, Fred Sandback and Robert Smithson.

This September, Sotheby’s has the honor to present a further selection of works from this collection by artists such as Mel Bochner, Yayoi Kusama, Sol LeWitt, Barry LeVa, Sherrie Levine, Richard Long, Robert Mangold, John McLaughlin and Joel Shapiro. The most diverse group of works are by Mel Bochner, and they span his career from the late eighties to 2010. Bochner’s focus on systematic methods and subjects – from his geometric compositions to the text-based art of recent decades – is a perfect example of the wide-ranging sense of adventure exhibited by this private collection. As a critic and an artist, Bochner questioned all systems of representation, both visual and verbal, and analyzed mathematics, conventions, codes, processes, and language as the basis of how we process the world around us. The more geometric abstractions of the 1980s explore cognitive concepts such as stacking, counting, composing, and measuring, while the later works from the 2000s interrogate the fundamentals of language such as grammar, words and logic. The artist’s initial work of the early 1960s was more figurative and expressionistic, but his writings reveal a growing affinity with the dawn of Minimalism and Jasper Johns’ use of letters and signs that prompted a dramatic shift in his artistic practice.

Bochner wrote an insightful review for Arts Magazine of the Jewish Museum’s 1966 exhibition, Primary Structures, which is regarded as a pivotal moment in the emergence of the reductive practices of Minimalism and Conceptualism. “What these artists …. hold in common is the attitude that Art – from the root artificial – is unreal, constructed, invented, pre-determined, intellectual, make-believe, objective, …Old Art attempted to make the non-visible (energy, feelings) visual (marks). The New Art is attempting to make the non-visible (mathematics) visible (concrete).” (Exh. Cat., New Haven, Yale University Art Gallery, Mel Bochner: Thought Made Visible 1966-1973, 1995, p. 17). A breakthrough in Bochner’s own work soon followed, as cubic structures and notational systems entered his work, and the artist would serve as an influential example of art as a cognitive endeavor for many years to come. The title of Bochner’s 1995 retrospective at the Yale University Art Gallery encapsulates both his artistic practice and this collection’s guiding principle: “thought made visible.”