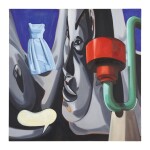 This work is in excellent condition overall. Under ultraviolet light, there is no evidence of restoration.

David Salle is a multimedia artist best known for his paintings, though he also produces prints and photographs. Gaining attention in the early 1980s, Salle’s neo-expressionist works stress a return to figuration prominent also among his contemporaries Julian Schnabel, Jean-Michel Basquiat and Francesco Clemente. Using various sources, the artist produces collage-like large-scale canvases combining a Pop Art vocabulary with surrealistic metaphor to lay out colorful compositions in an uncomplicated style. Mixing themes and images that are attributed meaning by way of the larger structure Salle constructs to tie them together, his work can be seen as representative of the onslaught of media culture in our modern world.

David Salle’s work is featured in the permanent collections of distinguished museums including the Whitney Museum of American Art, the Solomon R. Guggenheim Museum, the Tate Modern and The Art Institute of Chicago, amongst others.