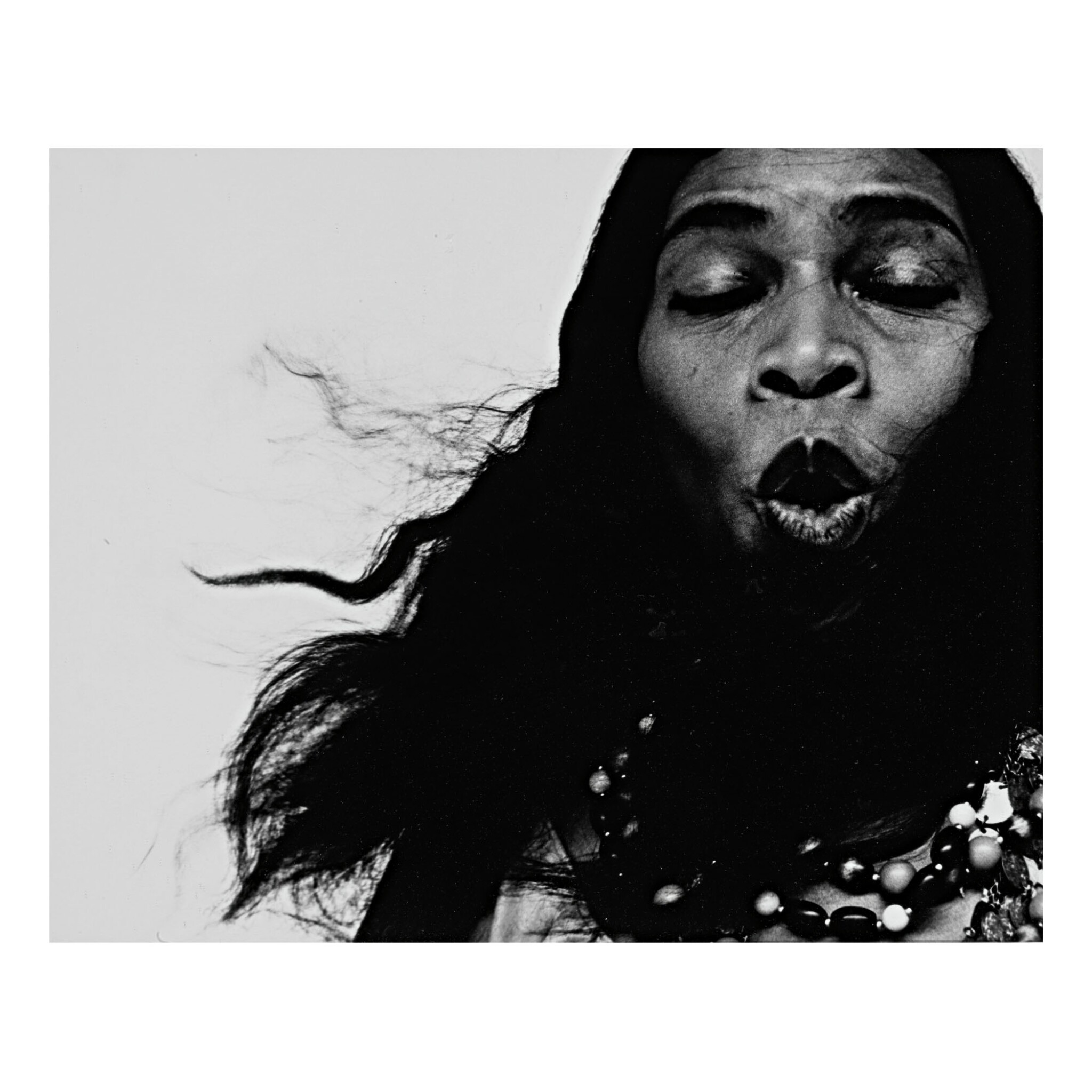 flush-mounted, signed and inscribed 'For Herman with gratitude and admiration Dick' in ink, and with the photographer's '110 East 58th Street, New York 22, N.Y.' studio stamps, with title in ink, on the reverse, 1955

This rare early print is in overall very good condition. The highlights are pleasingly creamy and bright, and the darks are saturated and inky. There are several sharp creases at the upper right corner, some of which appear to break the emulsion, which likely occurred prior to or as a result of mounting. There are scattered scratches that do not break the emulsion, visible only in raking light, and small deposits of original retouching.

The print is flush-mounted to heavy board. It is recessed in a sink-mat, which is overmatted so that the edges of the print and reverse of the mount are not fully visible.

Gift of the photographer to Hermann Landshoff, circa 1955

By descent to his wife, Ursula Landshoff

Richard Avedon photographed the singer Marian Anderson (1897-1993) in his New York studio in June 1955 while she performed for him the role of Ulrico, the fortuneteller in Giuseppe Verdi’s opera Un Ballo in Maschera. With her hair swinging wildly and a tangle of beads around her neck, she embodied the mercurial, charismatic character. More significantly, Anderson was the first African American to sing with the New York Metropolitan Opera. ‘It was far more than just a debut. The American contralto is the first Negro singer to become a member of the company,’ noted The Los Angeles Times in 1955. '. . . For her it was the culmination of a brilliant international career as a concert performer, and for other Negro singers it was the opening of a new and major door to opportunity.’ Behind these celebratory words hung shameful prejudice of the recent past. In 1939, the Daughters of the American Revolution prohibited the black singer from performing at Constitution Hall. Eleanor Roosevelt intervened, denouncing her own membership to the DAR, and Anderson instead sang to a mesmerized crowd of 75,000 people at the Lincoln Memorial.

Avedon’s portrait of Anderson was first published in the November 1955 issue of Harper’s Bazaar. It subsequently became a prominent two-page spread in Observations, Avedon’s first monograph, published in 1959. The photographer reminisced in 1963 about this sitting: ‘I once made a portrait of Marian Anderson singing. After looking at the print of the entire negative I decided to crop it. I made the head much larger in relationship to the entire picture area and placed it high and off center. This created a more dynamic composition that emphasizes the power and vitality of the subject.’

Richard Avedon’s kinetic style of fashion photography took a direct cue from his mentor Hermann Landshoff, who often directed his models to perform in non-studio environments (see Lot 199). The two men had met in Alexey Brodovitch’s darkroom around 1945, where they both printed the art director’s negatives of the Ballet Russes. Avedon once stated, ‘I owe everything to Landshoff.’ He gifted the photograph offered here to Landshoff shortly after the sitting and inscribed the reverse: ‘For Herman, with gratitude and admiration, Dick.’ Landshoff hung this portrait in his home and lived with it for the rest of his life.

Prints of this seminal image are rare. Avedon made two small editions from this negative during his lifetime, and prints are in the collections of the Smithsonian’s National Museum of American History, Washington, D. C.; The Museum of Modern Art, New York; The Metropolitan Museum of Art, New York; Center for Creative Photography, Tucson; and the Museum of Fine Arts, St. Petersburg. At the time of this writing, it is believed that no other signed print of this image has been offered at auction.