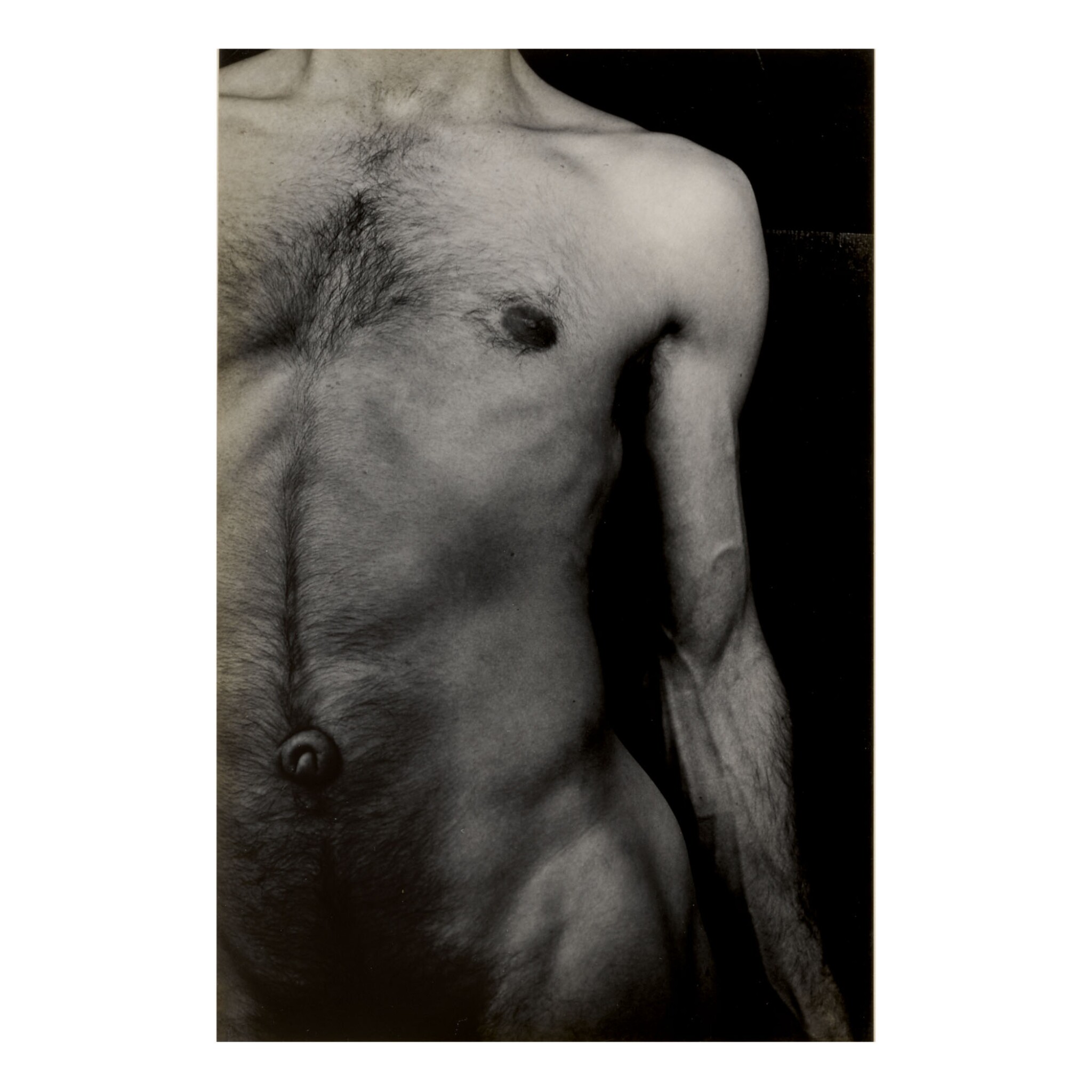 This early print is in generally excellent condition. A fine patina of age-appropriate silvering along the edges is visible in raking light.

The photograph is mounted off-center to thick board. There are 5 small yellowed areas from old adhesive. The mount corners are bumped and there is some age-darkening at the edges.

The model for this photograph was Tom Murphy, with whom Minor White worked extensively in the late 1940s while living in San Francisco and teaching at the California School of Fine Arts. With his sinewy musculature evocative of Michelangelo’s David, Murphy played a key role in White’s examination of the male nude form and the photographer’s struggle with his own sexuality. White carefully sequenced and hand-bound 32 images of Murphy’s hands, feet, and explicitly naked body in 1948 for The Temptation of Saint Anthony is Mirrors, among the most emotionally raw projects in the photographer’s oeuvre. A print of the full negative of this image, with Murphy in contrapposto and his genitals exposed, is included as the twenty-first image in The Temptation of St. Anthony is Mirrors. A love letter to his sitter, composed through the lens, it was neither exhibited nor reproduced during White’s lifetime, and only the photographer and sitter possessed copies. The Temptation of Saint Anthony is Mirrors remained largely unseen until the 2014 Getty Museum retrospective Minor White: Manifestations of the Spirit and the 2015 publication The Time Between: The Sequences of Minor White, which faithfully reproduced this sensitive body of work.

It is likely that this early print was used by Minor White in preparation for his 1959 exhibition at the George Eastman House, Sequence 13/Return to the Bud, an ambitious 115-print sequence of photographs and text. Before the final exhibition prints for Sequence 13/Return to the Bud were to be mounted to aluminum, White first worked with a set of prints mounted to board to lay out and order the exhibition. It is believed that the print offered here is one of these. The off-center mounting and series of faint adhesive remnants on the mount above and to the left of the photograph suggest a sheet of text was previously affixed to it. The careful combination of photographs and lyrical text was central to White’s philosophy and practice of photography.

Sequence 13/Return to the Bud served as a prototype for White’s seminal 1969 volume Mirrors Messages Manifestations, which includes a wider cropping of the present image in the Amputations sequence (1947), accompanied by lines drawn from verses composed by White himself during his World War II military service: ‘If battle gives me time/It is my will/To cut away all dear insanities/I get in war/Or if I live/To amputate the pain/I’ve seen endured’ (Mirrors Messages Manifestations, p. 33).