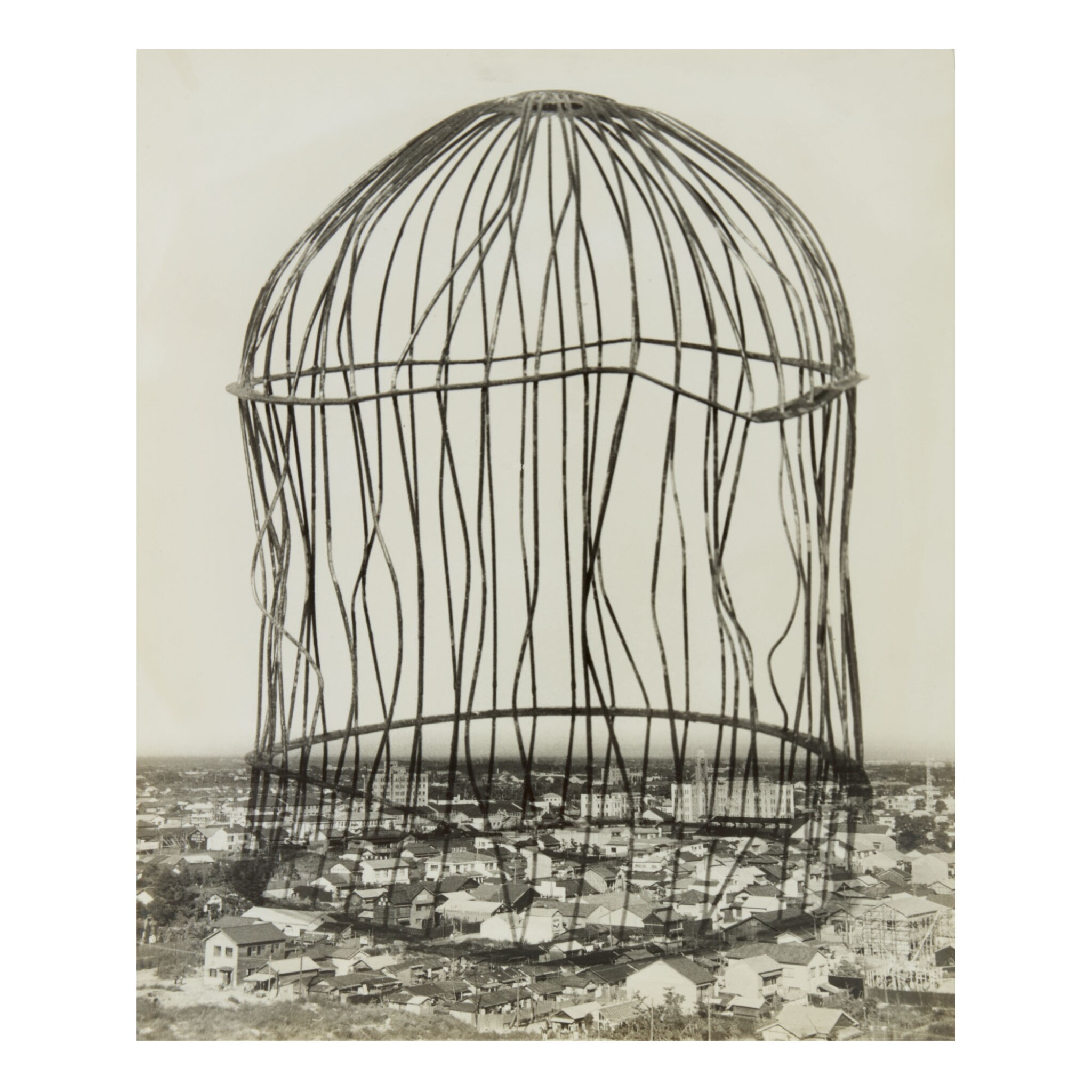 This early print is in generally excellent condition. When examined in high raking light, minor pitting and hairline scratches are visible overall indicating that the surface may be ferrotyped. Upon close inspection in raking light, the following are visible: a sharp crease at the center-right; a few soft creases, mostly in the upper portion; a one-3/4-inch scratch in the lower portion of the image which does not appear to break the emulsion; and very minor silvering in the darkest areas near the edges. There is a tiny deposit of original retouching at the upper center, on the birdcage.

There is some minor soiling on the reverse.

Legend of a Buddhist Temple (by Kansuke Yamamoto)

a birdcage without a bird and

from a garden without a birdcage with a bird

along the line of the white Coliseum

shaking the even more grotesque Colossus

leaning a cheek on the fingers of a heathen

Attentive to international developments in artistic practices of his time, Yamamoto incorporated Surrealism and photocollage into his work from the early 1930s. It is important to note, however, that ‘. . . Yamamoto did not cavalierly adopt the expressive technique of collage from the European avant-garde; he did not use collage for merely its aesthetic and stylistic elements. Rather, he was able to show that this technique was well suited for sharp social criticism, and he used it in the specific context of Japan’ (Japan's Modern Divide, Ryuichi Kaneko, p. 164). He conveyed his political views and critique of contemporary Japanese society through his creative output, which included photographs, poems, newspaper articles, translations and his teaching, and strongly believed in Surrealism as a powerful political weapon.

The birdcage is a recurring motif in Yamamoto’s photography and poetry. He thought of the bird as the most advanced of all beings because it has the ability and freedom to fly. The present image of the cage, its rusty bars mangled and burned, is overlaid on a Japanese city to create an image evocative of the devastating aftermath of the atomic bomb. As ‘housing’ for an animal, the cage is connected to the human houses underneath, alluding to the entrapment of the unseen population of the city below. In this work and many of his other Surrealist photocollages, Yamamoto communicates his frustration with the Japanese state of mind, regulations of freedom and free expression, and the postwar occupation of U. S. military forces. Despite its often somber implications, Yamamoto’s bird/birdcage symbolism perhaps carries some hopeful undertones. The cage in the photocollage as well as in the poem above, is decidedly empty; no bird is caught inside, suggesting that there is hope for Japan and its people. ‘Yamamoto was trying to wake up Japan in order to encourage it to dream’ (Ibid., Amanda Maddox, p. 202).