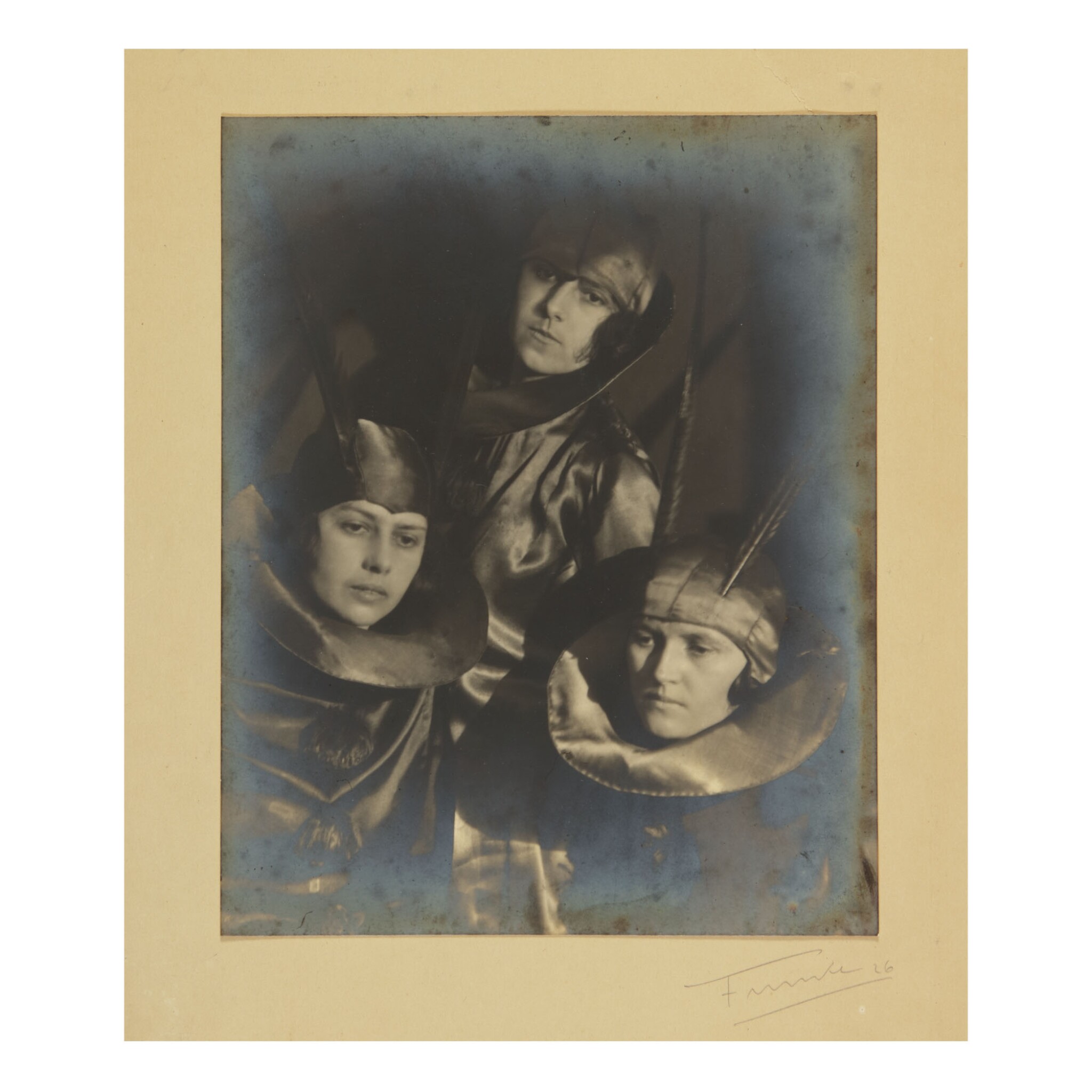 AFTER THE CARNIVAL (PO KARNEVALU)

This early, rare photograph, on a large buff mount, exhibits a striking amount of detail, from the sitters' facial features to the various textures of the fabrics in their costumes. As is visible in the catalogue illustration, there is a patina of age-appropriate silvering. Upon close examination, scattered tiny matte deposits, possibly foxing, are visible throughout, although most noticeably near the edges of the print in the silvered areas. Also visible upon close inspection are scattered deposits of original retouching. There are a few fingerprints visible in the silvered areas near the extreme edges of the print.

There are losses to the tips of the upper corners of the buff paper mount. There are several creases and tears to the mount, which have been expertly reinforced on the reverse. There is minor soiling on the front and reverse of the mount.

The mount has recently undergone conservation. A treatment report is available upon request from the department.

From the same sitting:

Funke was enthralled by art from a very young age; although he studied medicine and completed his law studies, he never registered for the final exams and instead dedicated himself solely to photography. While his earliest photographic work aligns with the Pictorialist aesthetic, by 1923 he was already making very modern images and experimenting in ways that his peers would not until the late 1920s. Funke understood that abstraction can be achieved without suppressing reality. ‘Obviously, life itself offers the most varying situations and it is the responsibility of the photographer to become conscious of the possibilities reality brings to him, be it through selection, isolated in an expressive manner from undesirable elements, or be it through mutual confrontation’ (Jaromír Funke, ‘From the Photogram to Emotion,’ 1940, as quoted in Jaromír Funke, Rudolf Kicken Galerie, 1984, p. 29).

Funke’s avant-garde experimentation began with a series of still life and quickly expanded to encompass portraits and nudes, utilizing bold cropping, bird’s-eye views, unusual angles, and sharp diagonal compositional elements. His preoccupation with light and dark is already evident in this early group portrait, from the sitters’ glowing satiny garments, to the dramatic shadows across their faces as well as those cast onto the otherwise plain background. The photographer’s very deliberate positioning of the figures is evident; each sitter in the triangular arrangement gazes out of the frame yet remains integral to the composition.

A purist, Funke believed strictly in modern, straight photography: the sitters here are shown in sharp focus, revealing great details in their costumes and facial features. The present photograph, taken at a masquerade ball in Kolín, shows the Matucha sisters (top and lower right) along with a third person clad in the same large-collared cloak. These futuristic costumes, embellished with fuzzy pompom-buttons and impressively long feathers, were likely designed by modern painter Zdenek Rykr, who was instrumental in introducing Funke to Cubism during the early 1920s and acted as a conduit to connect him with the larger Czech artistic landscape.

The Estate of Jaromír Funke has three glass negatives from this sitting: the most well-known image features only the Matucha sisters, whereas the other two include three figures, as in the present lot. Images from this sitting have been variously dated in the Funke literature; while many have dated the two-person variant to 1924, recent scholarship has dated it to 1926, which matches the date on the mount of the present photograph (‘26’). At the time of this writing, no other prints of the present image have been located.