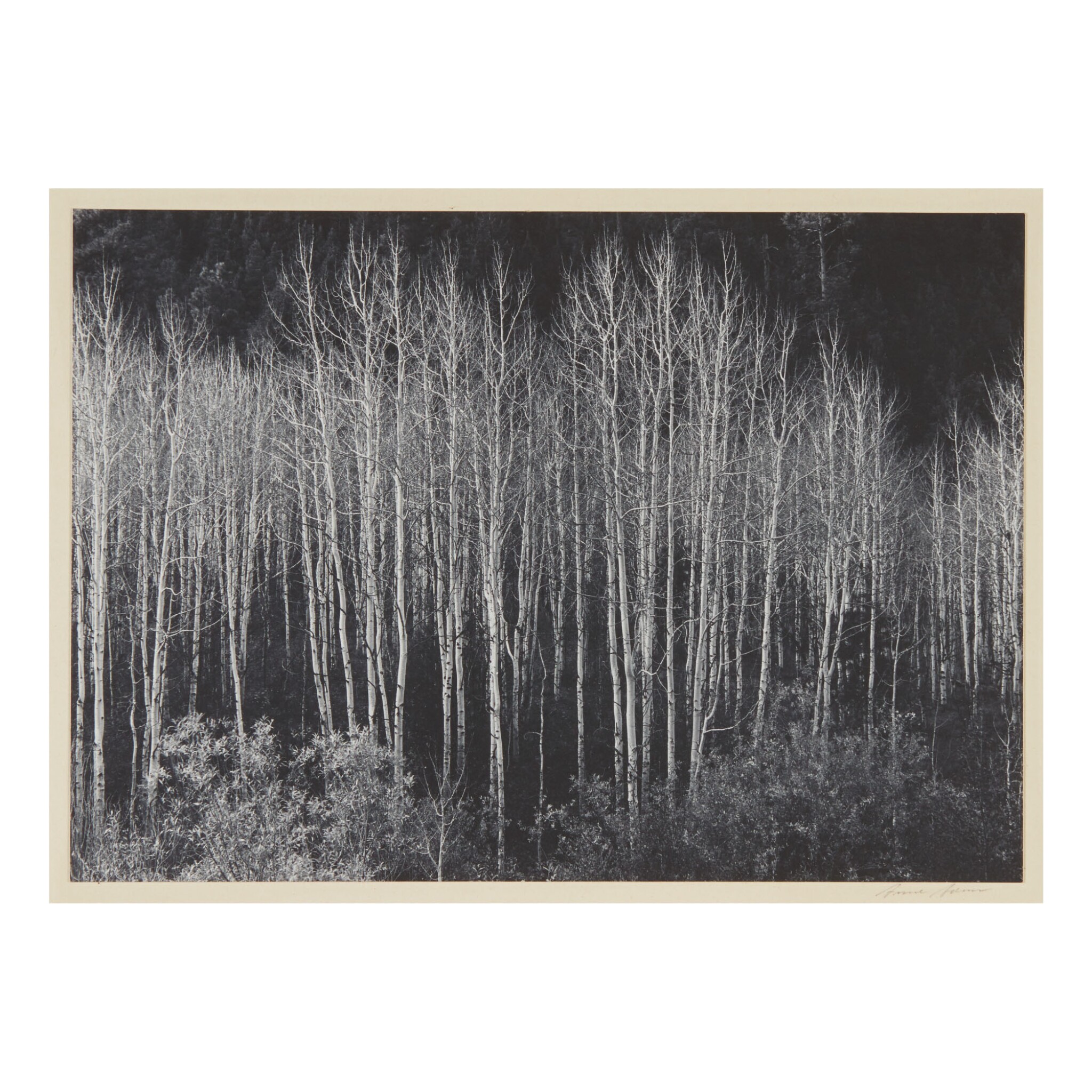 mounted, signed in pencil on the mount, inscribed 'For The Spencers, from Ansel Adams' in ink on the reverse, 1937, probably printed in the 1940s

This early print is in generally excellent condition. It is on matte paper with a lush velvety finish. The photograph is mounted to off-white matte-surface card. The mount is somewhat darker where it has been covered by the mat. 'ASPENS AUTUM [sic] - 1937 - THE ELOQUENT LIGHT. PLATE 148' is written in an unidentified hand in pencil on the mount. The reverse of the mount is slightly soiled and age-darkened, and there are two hinge remnants along the upper edge. 'ADA0-004101' is written in pencil in an unidentified hand.

In October 1937, Ansel Adams traveled to the American Southwest with patron David McAlpin to visit Georgia O’Keeffe, and together the group explored areas of New Mexico, Arizona, and Colorado, with Orville Cox as their guide. Winter had already arrived in Colorado’s Dolores River Canyon, where Adams happened upon a grove of Aspen trees, their skeletal branches rising and falling rhythmically as they receded from view. His time spent working alongside O’Keeffe encouraged him to disregard extraneous details and, training his lens on the undulating tree line, he snapped this image.

It was while on this trip that Adams wrote to Stieglitz, ‘I think I am getting some very good things—quite different, I believe. I like to think of my present stuff as more subtle, more lifting-up-the-lid, if you know what I mean. . .perhaps I am on the edge of making a really good photograph.’ Once described by John Szarkowski, director emeritus of photography at The Museum of Modern Art, as ‘a fugue of aspens,’ this ethereal image was the first photograph by Adams that caught the eye of Beaumont and Nancy Newhall, who displayed a print of it proudly in their living room for many years.

The Spencers to whom this photograph is inscribed are likely Eldridge Theodore (Ted) and Jeannette Dyer Spencer, lifelong friends of Adams. It was with the encouragement of Ted Spencer that Adams successfully inaugurated a Department of Photography at the California School of Fine Arts (now the San Francisco Art Institute) in 1945, and in 1962, it was Ted (an architect by trade) who built the Carmel home where Adams and his wife, Virginia, would live for the rest of their lives.

Early prints of this image are scarce. Comparable examples have been located in the Lane Collection at the Museum of Fine Arts, Boston, and in the Ansel Adams Archive at the Center for Creative Photography, Tucson.