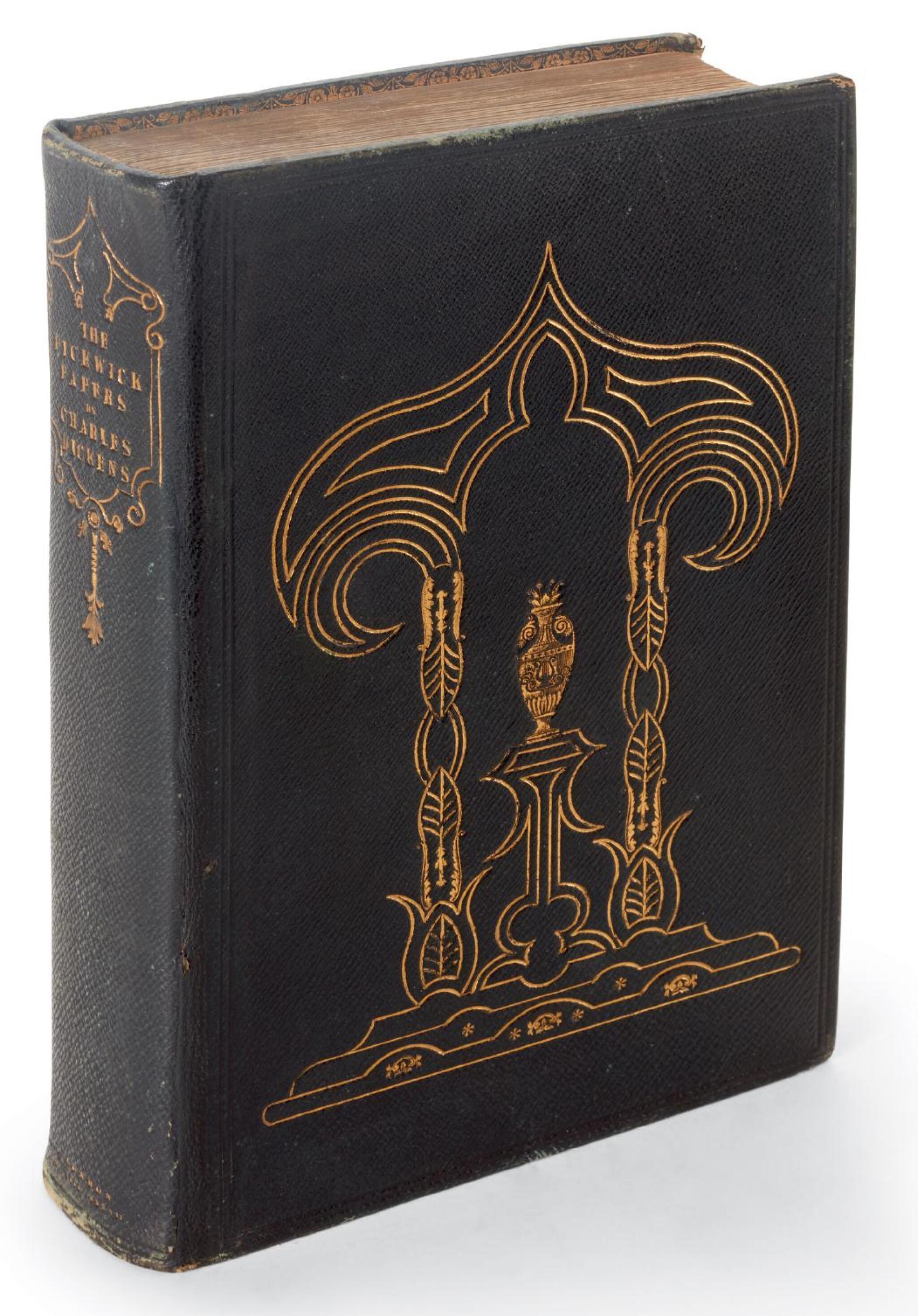 The Posthumous Papers of the Pickwick Club. London: Chapman and Hall, 1837

AN EXCEPTIONAL ASSOCIATION COPY OF THE AUTHOR'S FIRST NOVEL, IN ONE OF ONLY THREE KNOWN COPIES IN SUCH AN ELABORATE PRESENTATION BINDING.

This copy seems to be similar to that received by John Forster from Dickens on 11 December 1837, which he recorded as "in the most luxurious of Hayday's bindings, with a note [by Dickens]: 'Chapman and Hall have just sent me... these "extra-super" bound copies of Pickwick, as per specimen enclosed. The first I forward to you, the second I have presented to our good friend Ainsworth, and the third Kate has retained for herself. Accept your copy with one sincere and most comprehensive expression of my warmest friendship" (Forster, volume 1, pp.143-4). It seems therefore that Dickens subsequently presented his wife's copy to his new friend Elliotson. There are a few other presentation copies of Pickwick bound in a plainer format of pebble-grain green morocco (e.g. those given to Maclise and Landor). Similar "extra-super" bindings were made for some of the early novels: see, for instance, the copy of Oliver Twist presented to Willliam Harrison Ainsworth (the Self copy, sold at Christie's New York, 2 April 2008, lot 47).

John Elliotson (1791-1868), one of the founders of University College Hospital in London, was introduced to Dickens at the end of 1837 by William Macready, whose doctor he had been since November 1836. Considered a remarkable innovator in his methods, he was the first to use iodine in the treatment of goitre, the first to prove that glanders is communicable to humans, and the first to link atmospheric conditions with hay fever. Of more relevance and interest to Dickens Elliotson was a strong proponent of mesmerism (or magnetising), using trance methods to treat patients in 1837 and following up with public displays of the method, one of which (at UCH in January 1838) Dickens attended, together with Macready, Cruikshank and Ainsworth. Elliotson was subsequently denounced when it transpired some of the girls he was treating were exposed to be faking, and, though Elliotson denied the charge, he was forced to resign from the hospital. Dickens, however, stood by him, continued to employ him as his family doctor, became a firm friend, and was inspired to take up mesmerism himself three years later, when he mesmerised his wife Kate in Pittsburgh in March 1842 (see Tomalin, p.99, and other sources). The author also supported him financially when the doctor subsequently ran into difficulties. Elliotson retired from his Conduit Street practice in 1865, and settled in the Davies Street home of Dr Edmund Sheppard Symes, a former pupil, dying three years later. His godson John Elliotson Symes (1847-1921, the recipient of the second inscription) was a staunch Christian socialist who became professor of language and literature, and later principal, at the new Nottingham University College. There is a copy of Nicholas Nickleby similarly inscribed by Dickens to Elliotson and then by him to his godson in Princeton University Library.