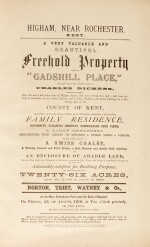 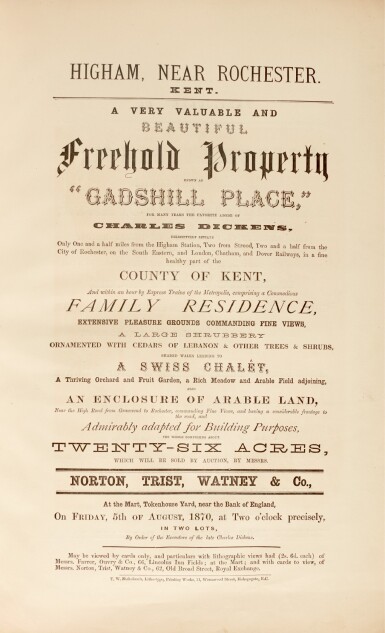 Higham, near Rochester. Kent. A Very Valuable and Beautiful Freehold Property known as "Gadshill Place", for many years the favourite abode of Charles Dickens...the whole comprising about Twenty-Six Acres, which will be sold by auction, by Messr. Norton, Trist, Watney & Co., at the Mart, Tokenhouse Yard, near the Bank Of England, on Friday, 5th Of August, 1870, at Two o'clock precisely, in Two Lots, by Order of the Executors of the late Charles Dickens... London: T.W. Nicholson for the auctioneers, 1870

EXTREMELY RARE: THE ORIGINAL AUCTION CATALOGUE OF GAD'S HILL PLACE, THE AUTHOR'S KENT HOME WHICH HE HAD FIRST SEEN AND YEARNED FOR AS A NINE YEAR OLD BOY. This appears to be the only example ever offered for sale at auction (acquired by Suzannet from Maggs in 1930, it was subsequently sold in 1971, 2008 and 2009: see provenance below).

"His father...pointed out, when they were walking together, the house set on the top of Gad's Hill, on the Rochester to Gravesend road, where Sir John Falstaff held up the travellers [in Shakespeare's Henry IV, Part I] and was commemorated by an inn named for him. Gad's Hill Place was a plain, solid brick house with wide views over the countryside stretching away below, and it immediately appealed to the child. He decided he would like to live in it, his father told him that if he worked very hard he might one day do so, and a version of this exchange was repeated whenever they passed it, as they did many times during the years in Kent. Years later he summed up what he liked about its situation to a friend: 'Cobham Woods and Park are behind the house; the distant Thames in front; the Medway, with Rochester, and its old castle and cathedral on one side. The whole stupdendous property is on the old Dover Road' " (Claire Tomalin. Charles Dickens: A Life, p.13, quoting letter by the author to Cerjat, July 1858).

It was in early 1855, when Dickens was beginning to develop his dark vision of contemporary England which became Little Dorrit, that after an all-male celebration of his birthday at a Gravesend Inn he walked to Rochester through the snow and noticed as he walked over Gad's Hill a sign advertising the sale of the freehold of the house. It was "the spot and the very house...literally 'a dream of my childhood' he told Wills, and instructed him to pursue the possibility of buying it..." (op.cit., p.258). By good chance the owner was the writer Eliza Lynn Linton, a contributor to Household Words, and he was able to buy it from her in March 1856 for £1,700. He subsequently lived there from 1860 until his death in June 1870.

In his will Dickens bequeathed his library to Charley, his manuscripts to Forster, and his private papers and jewellery to his sister in law Georgina Hogarth. The house and contents however were to be sold, and auctions took place almost immediately, beginning with the pictures (July, at Christie's), the furniture and wine (1st August) and the house itself (5th August). Charley himself made a successful bid for the house, acquiring it for £8,6000, much to the dismay of Georgina, who felt that his presence at the auction deterred others from bidding and kept the price artificially low. To finance the purchase Charley had to sell his father's library, as well as the chalet in which his father had worked. By 1879, falling ill, exhausted by the commute to London and having never succeeded as the businessman his father had tried so hard to make him, he was forced to sell up. Since 1924 Gad's Hill has been the site of an independent school.