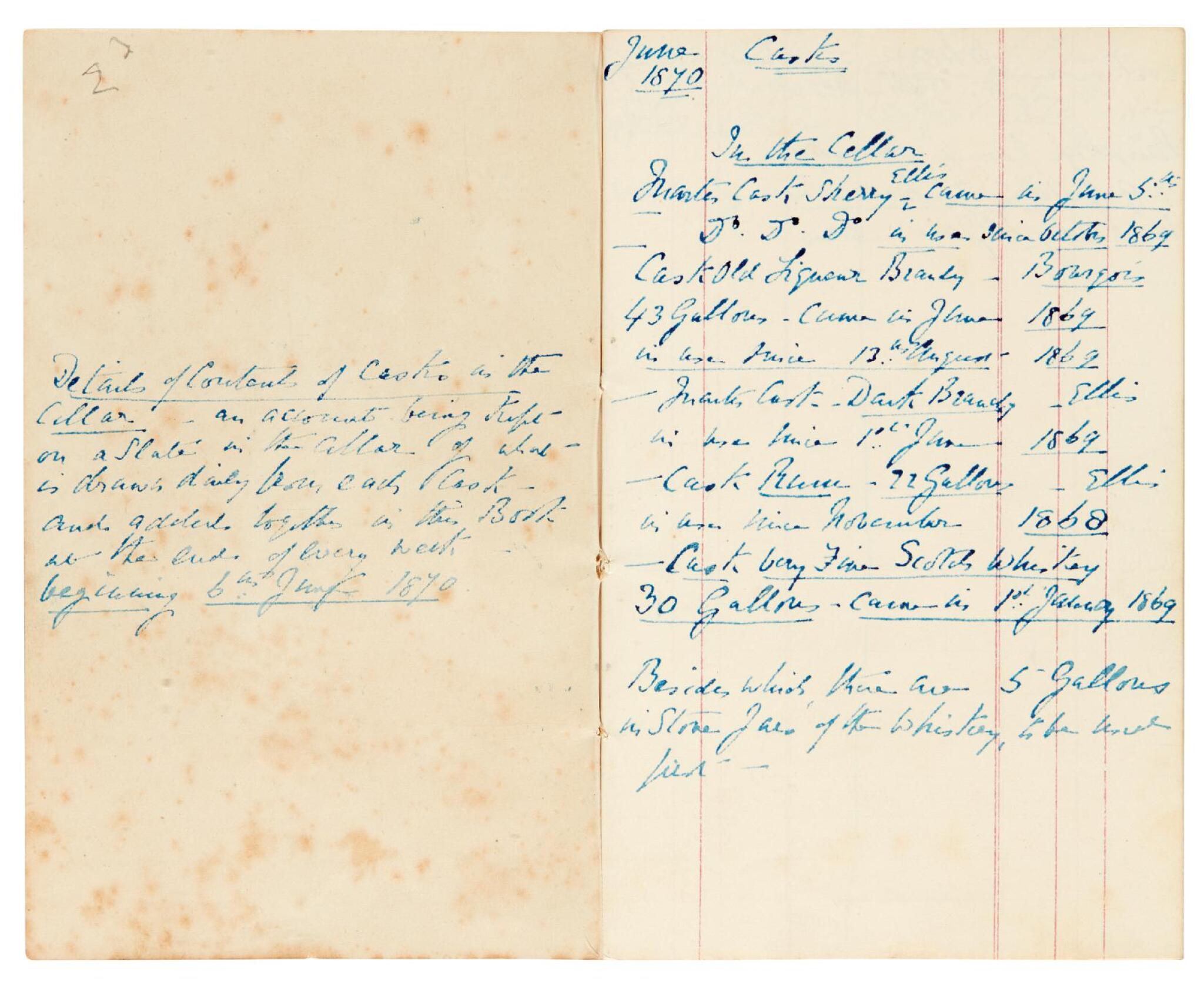 a household inventory produced by Dickens in the days before his death, listing casks of sherry, brandy, rum, and whisky present in the cellar ("...Besides which there are 5 Gallons in Stone Jars of the Whisky, to be used first"), with an explanatory note on the inside cover ("Details of Contents of Casks in the Cellar - an account being kept on a slate in the cellar of what is drawn daily from each cask - and added together in this Book at the end of every week beginning 6th June 1870"), subsequent entries recording usage for the week ending 6 June 1870 only, during which three quarts of sherry and one pint each of pale and dark brandy were consumed, 4 pages, 8vo, May-June 1870, printed paper wrappers, in a collector's box, light spotting to wrappers

Alcohol flows freely in Dickens's fictional world, from the gin-soaked Krook who spontaneously combusts in Bleak House to Scrooge's offer to toast Bob Cratchit with "a Christmas bowl of smoking bishop" (a lavish mulled wine) at the end of A Christmas Carol. Dickens himself was a moderate drinker by the standards of the time, but far from teetotal, and this autograph inventory shows that he kept an eye on the supplies at Gads Hill. It can be compared with an 1865 inventory of the cellar at Gad's Hill (on loan at Dickens House Museum); in the intervening years Dickens appears to have switched from gin to whisky.

This document is one of the last manuscripts that Dickens wrote, and it is poignant to think of the great novelist busying himself with domestic economy in the final days of his life. The day that he went down to the cellar to update the notebook was also the day that he spoke to his daughters Katey and Mamie for the last time. These final days were spent quietly in Kent with Georgina, working on Edwin Drood in the Swiss chalet in the gardens at Gad's Hill and attending to household matters. At 6pm on Wednesday 8 June he came into the dining room complaining that he felt unwell: he was suffering from a brain haemorrhage and soon collapsed into incoherence then unconsciousness, dying the following day.