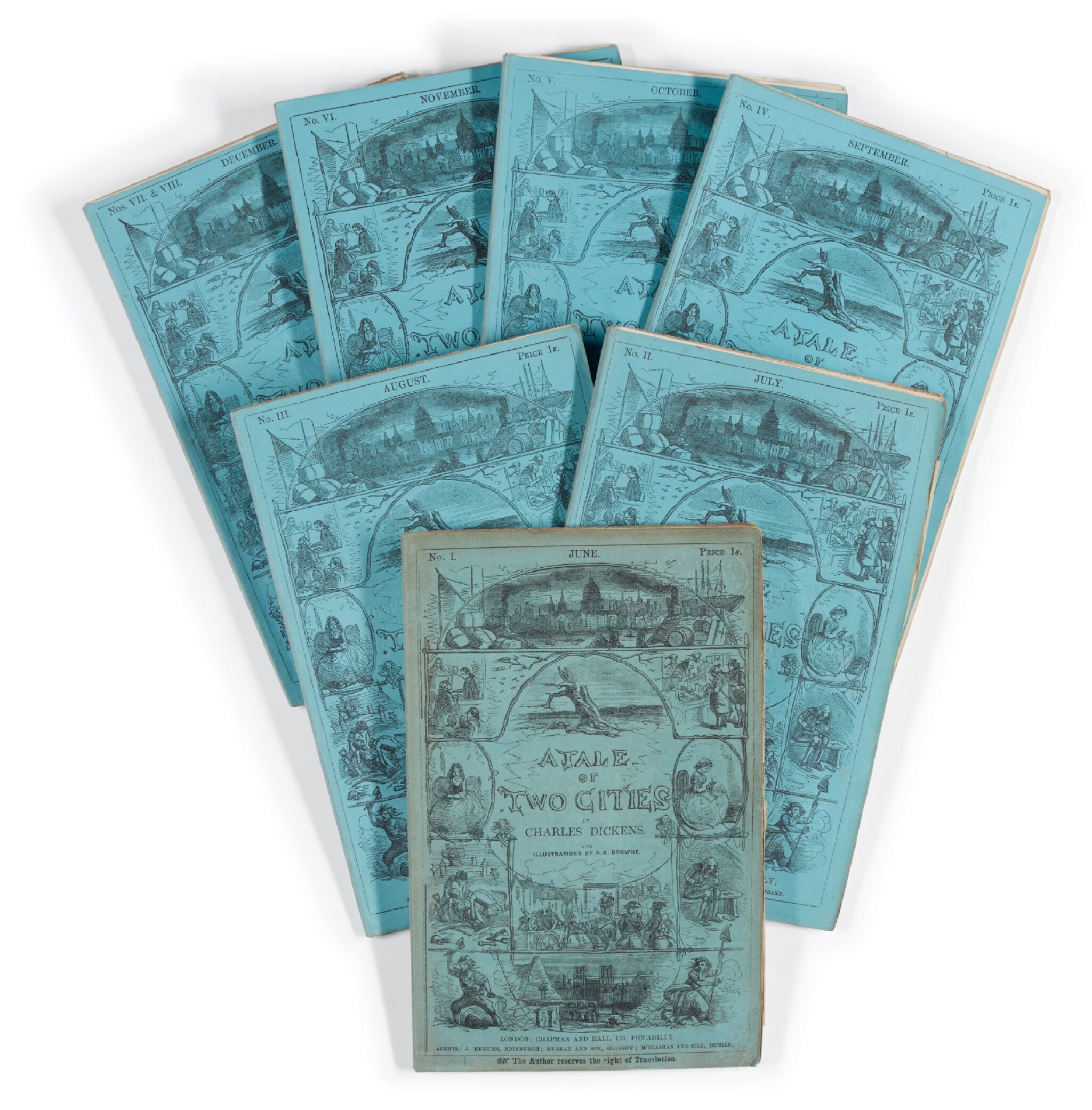 A Tale of Two Cities. London: Chapman and Hall, June--December 1859

8vo (222 x 145mm.) FIRST EDITION IN THE ORIGINAL 7/8 MONTHLY PARTS, mixed issue, with the first issue mispagination of p.213 in part 7/8 ("113") but with signature 'b' not present on "List of Plates" in the same part, 16 plates etched on steel by 'Phiz' (Hablot K. Browne), advertisements including the scarce "Cornhill Magazine" in final part (printing letter by Thackeray), "Morisonian Monument" advertisement instead of "Morison's Pills" at the end of part 3 (as found in some copies), without the advertisement for "Norton's Pills" at the end of part 4, without the slip announcing discontinuance of Household Words sometimes found in part 1, original blue-green printed wrappers, preserved in velvet-lined crushed green morocco folding box, wrappers of part 1 slightly browned, minor wear to wrappers, minor tear to one leaf of "Tale of Two Cities Advertiser" at the beginning of part 4

A NEAR FINE COPY OF THE UNCOMMON PARTS-ISSUE OF "A TALE OF TWO CITIES", representing the final collaboration between Dickens and his illustrator Hablot K. Browne ("Phiz"). The novel had first appeared in the weekly journal All the Year Round from 30 April to 26 November 1859. Loosely inserted is a single leaf prospectus, printed on the recto only, "'Lucie Manette', a Dramatic Overture, on Charles Dickens' 'Tale of Two Cities', composed by James Waterson". At the foot of the page is printed "This description of Mr. Waterson's Overture was written expressly for him by the late Charles Dickens", and on the blank verso are the inscriptions "Dear Mr. Sowerby, Will you print as usual this description. Written for me by Charles Dickens ... Jas Waterson" in ink, and in another hand, in pencil, "Late Band Master 1st Life Guards".